This section of the statistics and probability tutorial will introduce you to the continous variables. You will learn various aspects of continuous variables in this section.

(a) Basic Relationships
The probability that a continuous random variable will be between limits a and b is given by an integral, or the area under a curve. 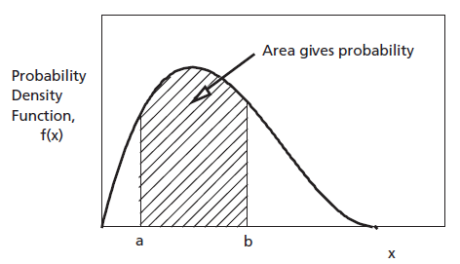 The cumulative distribution function for a continuous random variable is given by the integral of the probability density function between x = –∞ and x = x1, where x1 is a limiting value. This corresponds to the area under the curve from –∞ to x1. The cumulative distribution function is often represented by F(x1) or F(x).
Σp(xi )       ∼       ∫ f (x)dx
(Discrete)            (Continuous)
Since any probability must be between 0 and 1, as we have seen previously, the probability density function must always be positive or zero, but not negative. f (x) ≥ 0

where λ is a constant closely related to the mean and standard deviation.

Have a look at the Distribution of Continuous Variables.

Reliability is applied in many areas of engineering, including design of mechanical devices, electronic equipment, and power transmission systems. Although failures of supply of electricity to factories, offices, and residences were once frequent, they have become much less frequent as engineers have devoted more attention to reliability.