Following are the three categories into which these Data Science interview questions are divided:
1. Basic

Check out this video on Data Science Interview Questions:

1. What do you understand by linear regression?

2. Calculate the RMSE values for the model built.

Explanation: We have the actual and the predicted values. We will bind both of them into a single dataframe. For that, we will use the cbind function:

We will pass this object which is final_data and store the result in final_data again. We will then calculate the error in prediction for each of the records by subtracting the predicted values from the actual values:

Then, store this result on a new object and name that object as error. After this, we will bind this error calculated to the same final_data dataframe:

Here, we bind the error object to this final_data, and store this into final_data again. Calculating RMSE:

Note: Lower the value of RMSE, the better the model. R and Python are two of the most important programming languages for Machine Learning Algorithms.

3. What do you understand by logistic regression?

Logistic regression is a classification algorithm which can be used when the dependent variable is binary. Let’s take an example. Here, we are trying to determine whether it will rain or not on the basis of temperature and humidity.

Temperature and humidity are the independent variables, and rain would be our dependent variable. So, logistic regression algorithm actually produces an S shape curve. Now, let us look at another scenario: Let’s suppose that x-axis represent the runs scored by Virat Kohli and y-axis represent the probability of team India winning the match. From this graph, we can say that if Virat Kohli scores more than 50 runs, then there is a greater probability for team India to win the match. Similarly, if he scores less than 50 runs then the probability of team India winning the match is less than 50 percent.

4. What is a confusion matrix?

Confusion matrix is a table which is used to estimate the performance of a model. It tabulates the actual values and the predicted values in a 2×2 matrix. 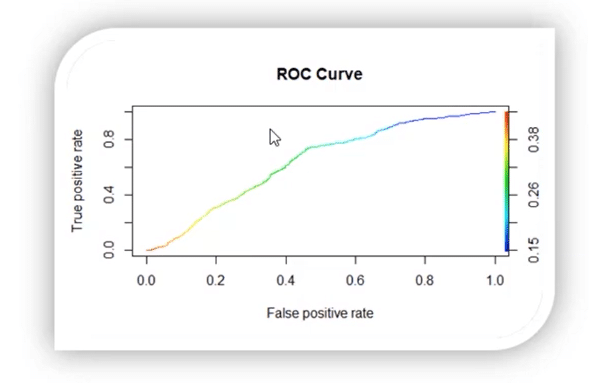 7. Build an ROC curve for the model built.

The below code will help us in building the ROC curve:

Go through this Data Science Course in London to get a clear understanding of Data Science!

8. What do you understand by a decision tree?

A decision tree is a supervised learning algorithm that is used for both classification and regression. Hence, in this case, the dependent variable can be both a numerical value and a categorical value.

9. What do you understand by a random forest model?

10. How is Data modeling different from Database design?

Data Modeling: It can be considered as the first step towards the design of a database. Data modeling creates a conceptual model based on the relationship between various data models. The process involves moving from the conceptual stage to the logical model to the physical schema. It involves the systematic method of applying data modeling techniques. Database Design: This is the process of designing the database. The database design creates an output which is a detailed data model of the database. Strictly speaking, database design includes the detailed logical model of a database but it can also include physical design choices and storage parameters.

11. What are precision and recall?

Precision: When we are implementing algorithms for the classification of data or the retrieval of information, precision helps us get a portion of positive class values that are positively predicted. Basically, it measures the accuracy of correct positive predictions. Below is the formula to calculate precision:

P-value is the measure of the statistical importance of an observation. It is the probability that shows the significance of an output to the data. We compute the p-value to know the test statistics of a model. Typically, it helps us choose whether we can accept or reject the null hypothesis. We use the p-value to understand whether the given data really describe the observed effect or not. We use the below formula to calculate the p-value for the effect ‘E’ and the null hypothesis ‘H0’ as true:

14. What is the difference between an error and a residual error?

15. Why do we use the summary function?

The summary function in R gives us the statistics of the implemented algorithm on a particular dataset. It consists of various objects, variables, data attributes, etc. It provides summary statistics for individual objects when fed into the function. We use a summary function when we want information about the values present in the dataset. It gives us the summary statistics in the following form: 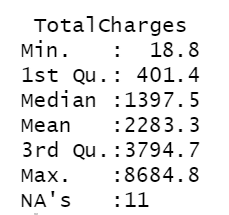 Here, it gives the minimum and maximum values from a specific column of the dataset. Also, it provides the median, mean, 1st quartile, and 3rd quartile values that help us understand the values better.

16. From the below given ‘diamonds’ dataset, extract only those rows where the ‘price’ value is greater than 1000 and the ‘cut’ is ideal.

First, we will load the ggplot2 package:

Next, we will use the dplyr package:

To extract those particular records, use the below command:

17. Make a scatter plot between ‘price’ and ‘carat’ using ggplot. ‘Price’ should be on y-axis, ’carat’ should be on x-axis, and the ‘color’ of the points should be determined by ‘cut.’

We will implement the scatter plot using ggplot.

The ggplot is based on the grammar of data visualization, and it helps us stack multiple layers on top of each other. 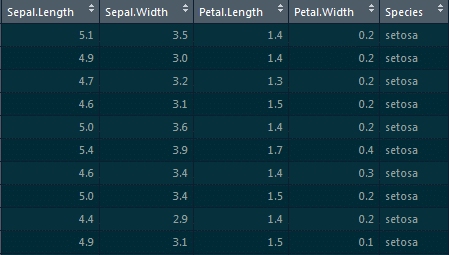 To introduce missing values, we will be using the missForest package:

Using the prodNA function, we will be introducing 25 percent of missing values:

Here, we need to find how ‘mpg’ varies w.r.t displacement of the column.

We need to divide this data into the training dataset and the testing dataset so that the model does not overfit the data.

So, what happens is when we do not divide the dataset into these two components, it overfits the dataset. Hence, when we add new data, it fails miserably on that new data.

Therefore, to divide this dataset, we would require the caret package. This caret package comprises the createdatapartition() function. This function will give the true or false labels.

Here, we will use the following code:

Parameters of the createDataPartition function: First is the column which determines the split (it is the mpg column).

Second is the split ratio which is 0.65, i.e., 65 percent of records will have true labels and 35 percent will have false labels. We will store this in split_tag object.

Once we have split_tag object ready, from this entire mtcars dataframe, we will select all those records where the split tag value is true and store those records in the training set.

Similarly, from the mtcars dataframe, we will select all those record where the split_tag value is false and store those records in the test set.

So, the split tag will have true values in it, and when we put ‘-’ symbol in front of it, ‘-split_tag’ will contain all of the false labels. We will select all those records and store them in the test set.

We will go ahead and build a model on top of the training set, and for the simple linear model we will require the lm function.

Thus, we have to predict values for the test set and then store them in pred_mtcars.

These are the predicted values of mpg for all of these cars.

So, this is how we can build simple linear model on top of this mtcars dataset.

Let us take out the dependent and the independent variables from the dataset:

We will separate the dependent and the independent variable from this entire dataframe:

The only columns we want from all of this record are ‘lstat’ and ‘medv,’ and we need to store these results in data1.

Now, we would also do a visualization w.r.t to these two columns:

By now, we have built the model. Now, we have to predict the values on top of the test set:

Now, let’s have a glance at the rows and columns of the actual values and the predicted values:

Further, we will go ahead and calculate some metrics so that we can find out the Mean Absolute Error, Mean Squared Error, and RMSE.

For loading the dataset, we will use the read.csv function:

In the structure of this dataframe, most of the values are integers. However, since we are building a logistic regression model on top of this dataset, the final target column is supposed to be categorical. It cannot be an integer. So, we will go ahead and convert them into a factor.
Thus, we will use the as.factor function and convert these integer values into categorical data.
We will pass on heart$target column over here and store the result in heart$target as follows:

Now, we will build a logistic regression model and see the different probability values for the person to have heart disease on the basis of different age values.

To build a logistic regression model, we will use the glm function:

family=”binomial” means we are basically telling R that this is the logistic regression model, and we will store the result in log_mod1.

We will have a glance at the summary of the model that we have just built: 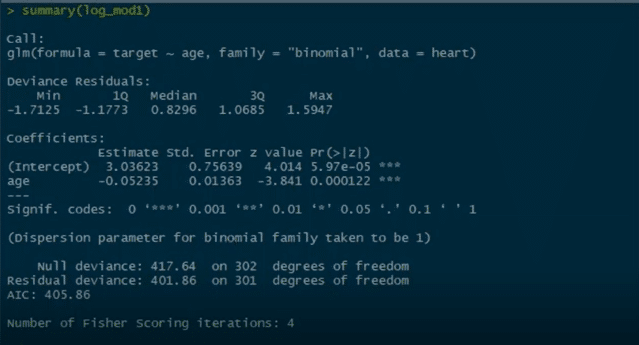 We can see Pr value here, and there are three stars associated with this Pr value. This basically means that we can reject the null hypothesis which states that there is no relationship between the age and the target columns. But since we have three stars over here, this null hypothesis can be rejected. There is a strong relationship between the age column and the target column.

Now, we have other parameters like null deviance and residual deviance. Lower the deviance value, the better the model.

This null deviance basically tells the deviance of the model, i.e., when we don’t have any independent variable and we are trying to predict the value of the target column with only the intercept. When that’s the case, the null deviance is 417.64.

This basically means that there is a strong relationship between the age column and the target column and that is why the deviance is reduced.

As we have built the model, it’s time to predict some values:

22. Build a confusion matrix for the model where the threshold value for the probability of predicted values is 0.6, and also find the accuracy of the model.

Accuracy is calculated as:

To build a confusion matrix in R, we will use the table function:

Then, we calculate the accuracy by the formula for calculating Accuracy. 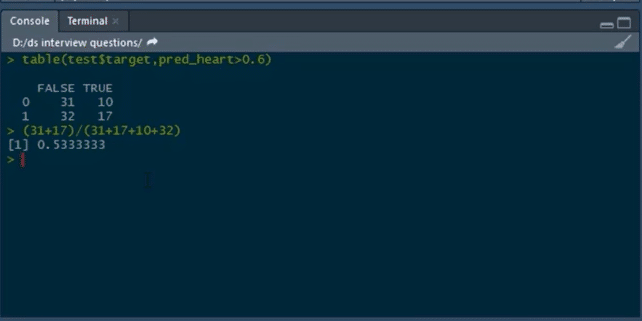 First, we will load the pandas dataframe and the customer_churn.csv file:

After loading this dataset, we can have a glance at the head of the dataset by using the following command:

Now, we will separate the dependent and the independent variables into two separate objects:

Now, we will see how to build the model and calculate log_loss.

As we are supposed to calculate the log_loss, we will import it from sklearn.metrics:

To build a decision tree model, we will be loading the party package:

Now we will plot the model

After this, we will predict the confusion matrix and then calculate the accuracy using the table function: 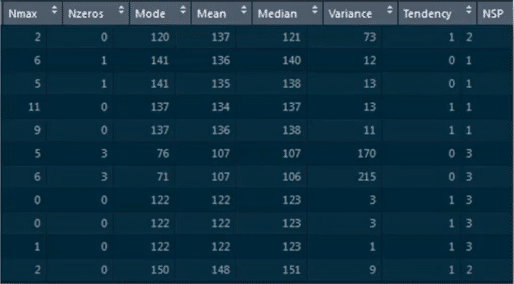 We will load the CTG dataset by using read.csv:

Converting the integer type to a factor