Constructing a Probability Distributions for Discrete Variables with Example

where k is the maximum possible value of i. Then p(xi) is a probability function, also called a probability mass function. An alternative notation is that the probability function of X is written Pr [X = xi]. In many cases p(xi) (or Pr[X = xi]) and xi are related by an algebraic function, but in other cases the relation is shown in the form of a table. The relation can be represented by isolated spikes on a bar graph.
By convention the random variable is represented by a capital letter (for example, X), and particular values are represented by lower-case letters (for example, x, xi, x0). 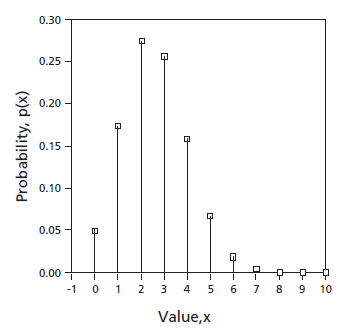 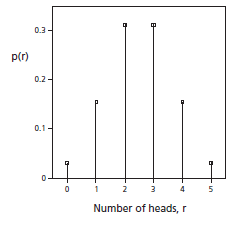 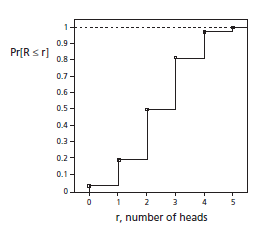 (b) Variance of a Discrete Random Variable
The variance was defined for the frequency distribution of a population. The mean value of (xi – μ)2. Since the quantity corresponding to the mean for a probability distribution is the expectation, the variance of a discrete random variable must be –

Binomial Distribution
This important distribution applies in some cases to repeated trials where there are only two possible outcomes: heads or tails, success or failure, defective item or good item, or many other possible pairs. The probability of each outcome can be calculated using the multiplication rule, perhaps with a tree diagram, but it is usually much faster and more convenient to use a general formula.
The requirements for using the binomial distribution are as follows:

Looking for Top Jobs in Data Science ? This blog post gives you all the information you need!
Poisson Distribution
This is a discrete distribution that is used in two situations. It is used, when certain conditions are met, as a probability distribution in its own right, and it is also used as a convenient approximation to the binomial distribution in some circumstances.
The Poisson distribution applies in its own right where the possible number of discrete occurrences is much larger than the average number of occurrences in a given interval of time or space. The number of possible occurrences is often not known exactly. The outcomes must occur randomly, that is, completely by chance, and the probability of occurrence must not be affected by whether or not the outcomes occurred previously, so the occurrences are independent.

where t (in units of time, length, area or volume) is an interval of time or space in which the events occur, and λ is the mean rate of occurrence per unit time or space (so that the product λt is dimensionless). As usual, e is the base ofnatural logarithms, approximately 2.71828. 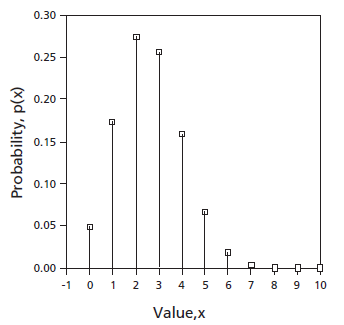 Corresponding to this is Figure: Simulated Frequency Distributions for Eight Repetitions, which is for the same values of n and p but shows two simulated relative frequency distributions. These are for samples of size eight—that is, samples containing eight items each. As we have seen before, relative frequencies are often used as estimates of probabilities. However, with this small sample size the relative frequencies do not agree at all well with the corresponding probabilities, and they do not agree with one another.

If the sample size is increased, agreement becomes better.

(b)Fitting a Binomial Distribution
The binomial distribution has two parameters, n and p. In any practical case we will already know n, the number of trials. How can we estimate p, the probability of “success” in a single trial? An intuitive answer is that we can estimate p by the fraction of all the trials which were “successes,” that is, the proportion or relative frequency of “success.” It is possible to show mathematically that this intuitive answer is correct, an unbiased estimate of the parameter p.