Home / Blog / How Entrepreneurship is Booming in Smaller Cities

How Entrepreneurship is Booming in Smaller Cities 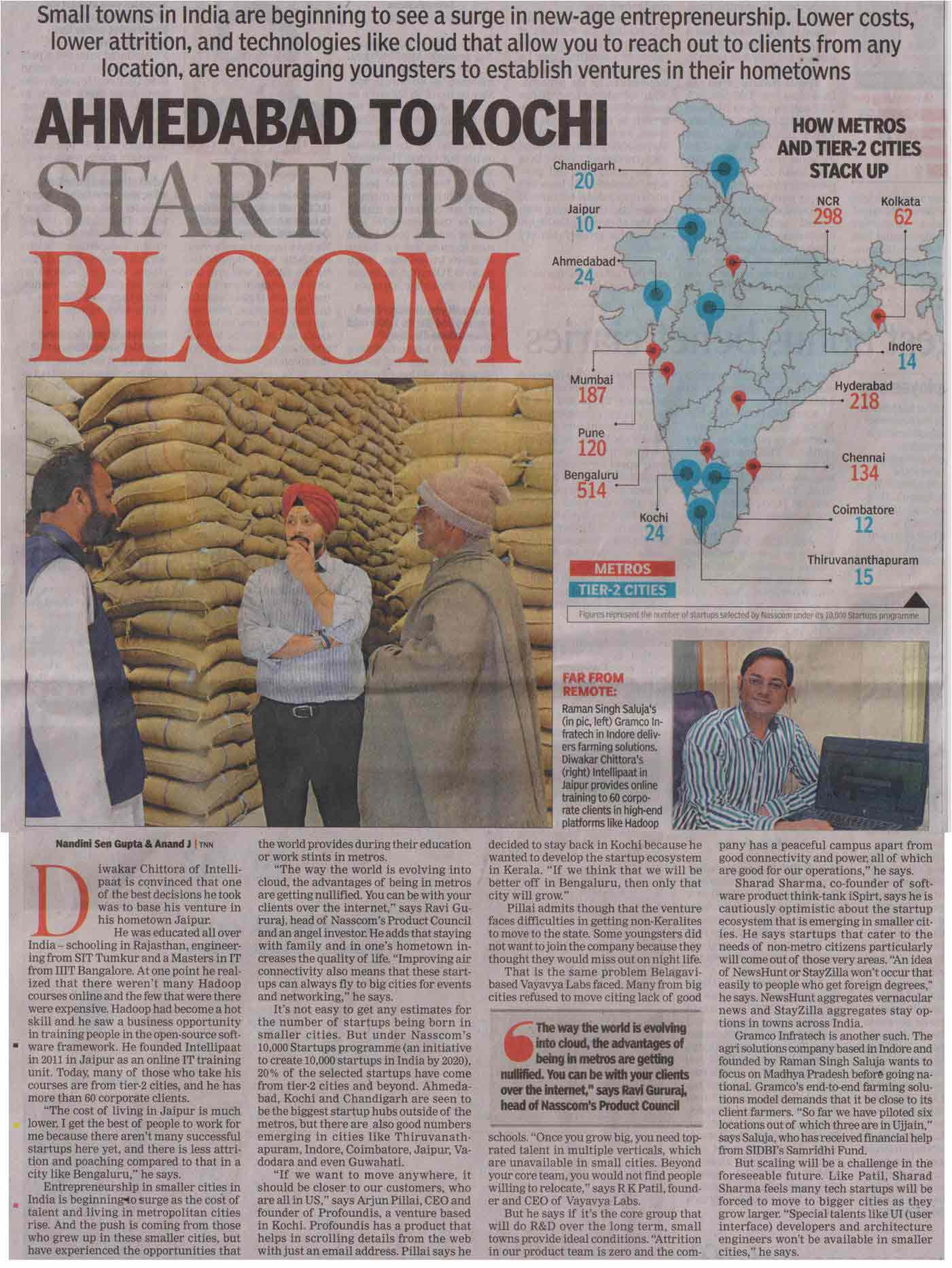 Diwakar Chittora of Intellipaat is convinced that one of the best decisions he took was to base his venture in his hometown Jaipur.

He was educated all over India – schooling in Rajasthan, engineering from SIT Tumkur and a Masters in IT from IIIT Bangalore. At one point he realized that there weren’t many Hadoop courses online and the few that were there were expensive. Hadoop had become a hot skill and he saw a business opportunity in training people in the open-source software framework. He founded Intellipaat in 2011 in Jaipur as an online IT training unit. Today, many of those who take his courses are from tier-2 cities, and he has more than 60 corporate clients.

“The cost of living in Jaipur is much lower, I get the best of people to work for me because there aren’t many successful startups here yet, and there is less attrition and poaching compared to that in a city like Bengaluru,” he says.
Entrepreneurship in smaller cities in India is beginning to surge as the cost of talent and living in metropolitan cities rise. And the push is coming from those who grew up in these smaller cities, but have experienced the opportunities that the world provides during their education or work stints in metros.

“The way the world is evolving into cloud, the advantages of being in metros are getting nullified. You can be with your clients over the internet,” says Ravi Gururaj, head of Nasscom’s Product Council and an angel investor. He adds that staying with family and in one’s hometown increases the quality of life. “Improving air connectivity also means that these startups can always fly to big cities for events and networking,” he says.

It’s not easy to get any estimates for the number of startups being born in smaller cities. But under Nasscom’s 10,000 Startups programme (an initiative to create 10,000 startups in India by 2020), 20% of the selected startups have come from tier-2 cities and beyond. Ahmedabad, Kochi and Chandigarh are seen to be the biggest startup hubs outside of the metros, but there are also good numbers emerging in cities like Thiruvanathapuram, Indore, Coimbatore, Jaipur, Vadodara and even Guwahati.

“If we want to move anywhere, it should be closer to our customers, who are all in US,” says Arjun Pillai, CEO and founder of Profoundis, a venture based in Kochi. Profoundis has a product that helps in scrolling details from the web with just an email address. Pillai says he decided to stay back in Kochi because he wanted to develop the startup ecosystem in Kerala. “If we think that we will be better off in Bengaluru, then only that city will grow.”

Pillai admits though that the venture faces difficulties in getting non-Keralites to move to the state. Some youngsters did not want to join the company because they thought they would miss out on night life.

That is the same problem Belagavibased Vayavya Labs faced. Many from big cities refused to move citing lack of good schools. “Once you grow big, you need toprated talent in multiple verticals, which are unavailable in small cities. Beyond your core team, you would not find people willing to relocate,” says R K Patil, founder and CEO of Vayavya Labs.

But he says if it’s the core group that will do R&D over the long term, small towns provide ideal conditions. “Attrition in our product team is zero and the com pany has a peaceful campus apart from good connectivity and power, all of which are good for our operations,” he says.

Sharad Sharma, co-founder of software product think-tank iSpirt, says he is cautiously optimistic about the startup ecosystem that is emerging in smaller cities. He says startups that cater to the needs of non-metro citizens particularly will come out of those very areas. “An idea of NewsHunt or StayZilla won’t occur that easily to people who get foreign degrees,” he says. NewsHunt aggregates vernacular news and StayZilla aggregates stay options in towns across India.

Gramco Infratech is another such. The agri solutions company based in Indore and founded by Raman Singh Saluja wants to focus on Madhya Pradesh before going national. Gramco’s end-to-end farming solutions model demands that it be close to its client farmers. “So far we have piloted six locations out of which three are in Ujjain,” says Saluja, who has received financial help from SIDBI’s Samridhi Fund.

But scaling will be a challenge in the foreseeable future. Like Patil, Sharad Sharma feels many tech startups will be forced to move to bigger cities as they grow larger. “Special talents like UI (user interface) developers and architecture engineers won’t be available in smaller cities,” he says.

How Entrepreneurship is Booming in Smaller Cities