Apache Cassandra is a widely used database management system that helps companies handle big data. Cassandra offers no single point of failure in its architecture, making it highly appealing. In this blog, we’ll introduce Cassandra, its features, and what makes it stand out.

Now, let’s discuss, what has changed with introduction of NoSQL?

Cassandra falls under the Columnar or extensible record category where each key is associated with many associates. It still uses tables but have no joins. Cassandra does not support joins or sub-queries, except for batch analysis via Hadoop. Rather, Cassandra emphasizes denormalization through features like collections. Cassandra stores data by columns, not like traditional row oriented databases.  To know more about Cassandra training courses, you can visit intellipaat.com

What is CAP Theorem?

It is also knows as Brewer’s theorem, states that it is impossible for a distributed computer system to simultaneously provide all three of the following guarantees:

According to this theorem, a distributed system can satisfy any two of these guarantee at the same time, but not all three.

So, we need to understand that partitioning is unavoidable when a network partition fails, i.e. systems can’t communicate with each other, in that particular point, the system should be operational but while it is operational whether it has to hold on availability or hold on to consistency is what each distributed system has to decide.

Cassandra has a concept called Tunable consistency model, this is the only database that has this particular concept, so you can setup Cassandra either for availability or consistency, Cassandra can work in both the modes unlike other databases.

We can’t build banking or financial systems using Cassandra instead it is used in social media. OLTP or payment models can’t be used in Cassandra.

If you look at the diagram below, it is very clear that Cassandra falls under the category of Available & tolerant partition. 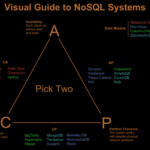 To know more about Cassandra , you can visit our Online Self Paced Courses, or give us a call if you are interested in online instructor based training in Big Data or online training in Cassandra.