This blog aims to provide a real time streaming application that makes use of Apache Kafka & Storm.

Both Kafka and storm integrate very well to form a real time ecosystem. The current day industry is emanating lots of real-time streaming data there need to be processed in real time. The below are some of the examples.

In order to deal with real time data, we need to have a right infrastructure to store and process the incoming data in a distributed manner.

What is Apache Kafka?

Apache Kafka is a fast, scalable, durable, and fault-tolerant publish-subscribe messaging system. Kafka is often used in place of traditional message brokers like JMS and AMQP because of its higher throughput, reliability and replication. Kafka can work in combination with Apache Storm, Apache HBase and Apache Spark for real-time analytics and rendering of streaming data. Kafka can message geospatial data from a fleet of long-haul trucks or sensor data from heating and cooling equipment in office buildings. Whatever the industry or use case, Kafka brokers massive message streams for low-latency analysis in Enterprise Apache Hadoop. Apache Kafka supports a wide range of use cases as a general-purpose messaging system for scenarios where high throughput, reliable delivery, and horizontal scalability are important. Apache Storm and Apache HBase both work very well in combination with Kafka. Common use cases include :

Learn more about this technology in this extensive Apache Kafka Tutorial!

Apache Storm is a distributed real-time computation system for processing large volumes of high-velocity data. Storm on YARN is powerful for scenarios requiring real-time analytics, machine learning and continuous monitoring of operations. Some of specific new business opportunities include: real-time customer service management, data monetization, operational dashboards, or cyber security analytics and threat detection. Because Storm integrates with YARN via Apache Slider, YARN manages Storm while also considering cluster resources for data governance, security and operations components of a modern data architecture.Storm is extremely fast, with the ability to process over a million records per second per node on a cluster of modest size. Enterprises harness this speed and combine it with other data access applications in Hadoop to prevent undesirable events or to optimize positive outcomes.
Twitter Stream Sentiment Analysis is performed in this blog with real time tweets stored in JSON data format. 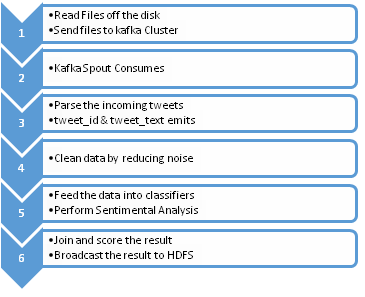 Parsing of the JSON tweets is one of the things needed to be done once Kafka Producer and Storm Topology are implemented.

This JSON parsing can be accomplished with JacksonXMLDatabind Library

Get the answers for Top Apache Storm Interview Questions here!

This is just using the basic ObjectMapper class from the JacksonDatabind library to map the simple JSON object provided by the Twitter Streaming API to a JsonNode. The language code is first tested to be English, as the topology does not support non-English tweets. The new tuple is emitted down the Storm pipeline after ensuring the existence of the desired data, namely, tweet_id, and tweet_text.

Once the required twitter_id&twitter_text are emitted, they need to be cleaned and sentimental analysis should be performed.