While there are so many languages out there, Python is a must-learn programming language for the professionals working in the Data Science domain. There is an increased demand for skilled Data Scientists in the IT industry, and Python has evolved as the most preferred programming language. With the help of this tutorial on Python for Data Science, you will understand why Python is considered to be the most preferred language. Now, let’s have a look on the basic features of Python and its domain scenarios.

Why Python for Data Science?

As you know, so many programming languages are providing the much-needed options to execute Data Science jobs. It has become difficult to handpick a specific language.

But it is data that provides a peep into these languages that are making their way into the world of Data Science, i.e., nothing can be as compelling as the data itself unveiling the results of the comparison between different Data Science tools.

With the adoption of open-source technologies taking over the traditional, closed-source commercial technologies, Python and R have become extremely popular among Data Scientists and Analysts.

But it has been noticed that ‘Python’s increase in the share over 2015 rose by 51% demonstrating its influence as a popular Data Science tool.’

Here’s a video from Intellipaat on Data Science With Python

Python as a ‘Leader’

Python programming language can run on any platform, from Windows to Linux to Macintosh, etc.

Why Is Python Preferred over Others?

Codes in Python are written in very ‘natural’ style; that’s the reason, it is easy to read and understand.

Some of the features of Python that make it a popular language in Data Science applications are:

Python is for anyone aspiring to learn because of its ease to learn and understand.

Python is a popular data science tool, which is ahead of SQL and SAS and comes next to R, with 35 percent of data analysts using it.

Python is known to be an extremely scalable language compared to other languages, like R, and is faster to use than MATLAB or Stata.

Its scalable nature lies in its flexibility during problem-solving situations because of which even YouTube has migrated to Python.

Python has come to be good for different usages in industries as many of our Data Scientists use this language to develop various types of applications successfully.

The best answer to the question – Why python for data science, is availability of various of Data Science/Data Analytics libraries like Pandas, StatsModels, NumPy, SciPy, and Scikit-Learn, which are some of the well-known libraries available for aspirants in the Data Science community.

The constraints that developers faced a year ago are addressed well by the Python community with a robust solution addressing problems of a specific nature.

One of the major factors behind the remarkable upsurge of Python in the industry is its ecosystem. Many volunteers are developing Python libraries these days as Python has extended its hands to the Data Science community which in turn has led the way for creating the most modern tools and processing in Python. The community helps these Python aspirants with relevant solutions to their coding problems.

Python provides various graphical and visualization options which are very helpful for generating insights of the data available. Matplotlib is a plotting library in Python that provides a solid base around which other libraries like Seaborn , pandas, and ggplot have been successfully built.

These packages help you in getting a good sense of data, creating charts, graphical plot, and web-ready interactive plots, and much more.

Python has gained immense popularity as a general-purpose, high-level back-end programming language for creating the prototype and developing applications. Python’s readability, flexibility, and suitability to Data Science operations have made it one of the most preferred languages among developers.

It has been reported that Python is being used extensively by developers in the creation of games, standalone PCs, mobile applications, and other enterprise applications. Python libraries simplify complex jobs and make data integration much easier with fewer codes in lesser time. It consists of more than 137,000 libraries which are very powerful and are vastly used to satisfy the requirements of customers and businesses. These libraries have helped our scientists and developers in analyzing huge amount of data, generating insights, critical decision-making, and much more.

Below are a few Python libraries which are widely used in the fields related to Data Science.

It is an extensive Python library which is used for scientific computations.

NumPy leverages your usage of sophisticated functions, N-dimensional array object, tools for integrating C/C++ and Fortran code, mathematical concepts like linear algebra, random number capabilities, and so on. You can use it as a multi-dimensional container for treating your generic data. It allows you to load data into Python and export data from the same.

It is another important library of Python for developers, researchers, and Data Scientists out there. SciPy includes optimizations, statistics, linear algebra, and integration packages for computation. It can be of great help for someone who has just started their career in Data Science to guide them through numerical computations.

It is a popular plotting library of Python which is extensively used by Data Scientists for designing numerous figures in multiple formats depending on the compatibility across their respected platforms. For example, with Matplotlib, you can create your own scatter plots, histograms, bar charts, and so on. It provides a good quality 2D plotting and a basic 3D plotting with limited usage.

Pandas is the most powerful open-source library of Python for data manipulation. It is known as Python Data Analysis Library. It is developed over the NumPy package. DataFrames are considered as the most used data structures in Python which helps you in handling and storing data from tables by performing manipulations over rows and columns. Pandas is very useful in merging, reshaping, aggregating, splitting, and selecting data.

Scikit-Learn is a collection of tools for performing mining-related tasks and data analysis. Its foundation is built over SciPy, NumPy, and Matplotlib. It consists of classification models, regression analysis, image recognition, data reduction methods, model selection and tuning, and many other things.

This is the snapshot of the data-set which you will be working upon:

Tasks to be Done:

Glancing at the first few rows of the dataset:

Extracting the 5th column from the entire data-set:

Making a bar-plot for the distribution of ‘Internet Service’ column: 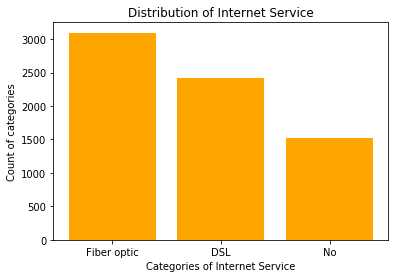 Making a histogram for the distribution of ‘tenure’ column: 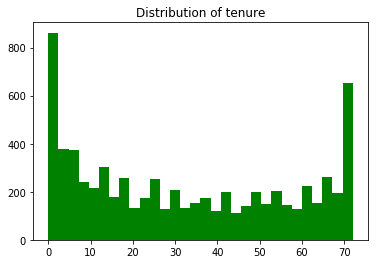 We’ll start off by extracting ‘Churn’ and ‘tenure’ from the original data-frame:

We’ll import the decision tree classifier and fit the model on top of train set:

Now, that we have fit the model  on ‘train’ set, it’s time to predict the values on the ‘test’ set:

Let’s go ahead and calculate the accuracy:

We see that, we get an accuracy of 73.88% for this decision tree model.

Companies That Use Python for Data Science

It has recently moved to Python 3, and the main reason why Instagram chose Python was its simplicity and popularity.

They claim to have considered different languages over Python but did not get any significant performance improvement.

Spotify trusts Python and uses it for back-end services, as well as for data analysis.

The company claims that the speed of development is their priority, and that’s the reason why Spotify uses Python to build its music streaming service as it just meets their development speed expectations.

For data analysis, Spotify uses Hadoop with Python to process the huge amount of data in order to polish its services.

It is possible due to their Python Machine Learning engine which interacts with Hadoop (the company’s database), i.e., they combine and work together in order to achieve maximum efficiency and accuracy in providing recommendations to customers.

Indulge in the Machine Learning Course to know more.

Facebook deals with huge amounts of data, including tons of images, and it uses Python to process its images.

It decided to use Python for its back-end applications connected with image processing (e.g., image resizing) because of its simplicity and ease of development.

It is one of the largest survey companies in the world that processes more than 1 million survey responses daily.

At the very beginning, the company’s web app was built on .NET, along with C#. There weren’t any issues with the smoothness of the system, but it got relatively slow in testing while deploying new features.

The company rewrote their app in Python and broke the main features into several separate services and these services were communicated through the web APIs. This allowed SurveyMonkey to implement features on smaller codebases which can be managed more easily.

They chose Python because of its simplicity (easy to read and understand), the availability of tons of libraries to build web apps faster, tools that facilitated deployment, unit testing, and so on.

If you have any doubts or queries related to Data Science, do post on Data Science Community.I hope, you have got an idea of Python, its libraries and why it is preferred over other languages for Data Science.

In the end, I would like to conclude that Python is an easy, simple, powerful, and innovative language. It is broadly used in a variety of contexts, some of which are associated with Data Science, while some are not.

Career Options After 12th - What courses to do aft...

What is Computer Security?