This Apache Cassandra tutorial is your first step to learning Cassandra which is a powerful, scalable, highly available, distributed NoSQL database. You will get to know the peer-to-peer architecture of Cassandra, what is column-oriented storage, how Cassandra is resilient, and more through this easy-to-learn Cassandra tutorial. Learn Cassandra from Intellipaat Cassandra training and fast-track your career.

Here’s a list of topics we’ll be covering in this blog:

What is Apache Cassandra?

Apache Cassandra is a highly scalable, high-performance distributed database that can manage massive data volumes across a number of commodity computers, offering high availability with no single point of failure. It is a type of NoSQL database. Let us first understand how the NoSQL database work. A distributed database management system called Cassandra is made to manage a large amount of structured data over a wide range of commodity computers.

Cassandra’s distributed architecture manages a massive amount of data. Since there is no single point of failure and data is spread across multiple machines, high availability is achieved.

Cassandra was first created at Facebook by Prashant Malik and Avinash Lakshman, one of the inventors of Amazon’s Dynamo, to support the Facebook inbox search feature. In July 2008, Facebook published Apache Cassandra as an open-source or publicly accessible project on Google Code. It was accepted as an Apache Incubator project in March 2009. The project advanced to a top-level project on February 17, 2010.

With historical references to a curse on an oracle, Facebook’s database was given the name Cassandra by its creators in honor of the Trojan fabled prophet. Facebook originally created Cassandra for inbox search.

Java Management Extensions can be used to administer and track Cassandra, a Java-based system (JMX). To operate a Cassandra cluster, for example, one can utilize the JMX-compliant nodetool software (adding nodes to a ring, draining nodes, decommissioning nodes, and so on).

Here in this section of the Cassandra tutorial, we will discuss some of the top features of Cassandra

Apache Cassandra is one of the most widely used NoSQL databases. Here we list some of the top applications of Cassandra.

Comparison between NoSQL and Relational Database

Let us first understand the difference between a NoSQL database and a relational database through this table:

Apache Cassandra is an open-source, powerful, distributed NoSQL database that does not have a single point of failure and is extremely scalable and highly available. Cassandra was originally developed at Facebook and later open-sourced and is currently part of the Apache Software Foundation.

Want to learn about databases in depth? Here is the Database training course provided by Intellipaat.

Cassandra is designed to handle Big Data workloads. It is capable of doing that across different nodes without failure at any point. Cassandra has a peer-to-peer system that is distributed across its multiple nodes. The data is distributed in a cluster among these nodes. Data dissemination to nodes is made transparent by the Cassandra design. This means that you can use the data to establish where your data is located within the cluster. There are no masters or slaves, therefore any node can accept any request. A node will return the data if it has it. If not, the request will be sent to the node that contains the data.

To obtain the necessary amount of redundancy, you can define the number of data replicas. For instance, you might wish to provide a replication factor of 4 or 5 if the data is extremely important. 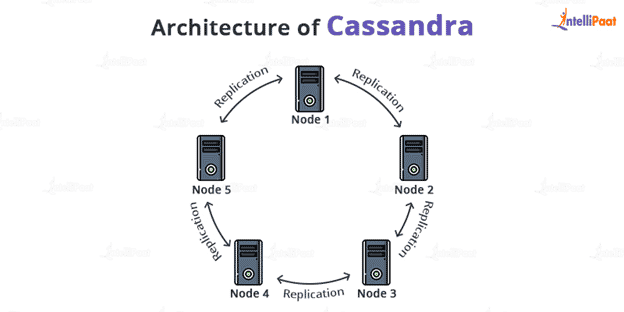 Check our blog on Cassandra Keyspace to learn more about Keyspace!

What is a NoSQL database?

A NoSQL or Not Only SQL is a set of databases that provide a way to store and retrieve data that is not in the standard tabular format followed by relational databases. The NoSQL databases of which Cassandra is a very popular database share some common features and attributes. The NoSQL databases do not have any schema, they support easy replication of data, they have a simple API, they do not exhibit the ACID properties but are eventually consistent, and finally last but not least, they can handle huge volumes of data.

Some of the properties of a NoSQL database include:

Why should you learn Cassandra?

All this means that the job market for Cassandra is just heating up and the salaries for Cassandra professionals are among the best in the Big Data domain. All these are compelling reasons for you to learn Cassandra and excel in your career.

Let’s look at some of the major points why Cassandra is such a widely used NoSQL database.

There are no prerequisites to learn Cassandra from this Cassandra tutorial. If you have a basic knowledge of databases, then it is good.