Sampling and Combination of Variables

In this part of the Statistics and probability tutorial we will discuss various techniques of Sampling and Combining Variables in Statistics in detail.

Techniques of Sampling and Combining Variables in Statistics

A sample is a group of objects or readings taken from a population for counting or measurement. From the observations of the sample, we infer properties of the population. For example, the sample mean, x , is an unbiased estimate of the population mean, μ, and that the sample variance, s2, is an unbiased estimate of the corresponding population variance, σ2(sqaure).
The sample must be random, meaning that all possible samples of a particular size must have equal probabilities of being chosen from the population. This will prevent bias in the sampling process. If the effects of one or more factors are being investigated but other factors (not of direct interest) may interfere, sampling must be done carefully to avoid bias from the interfering factors. The effects of the interfering factors can be minimized (and usually made negligible) by randomizing with great care both choice of the parts of the sample that receive different treatments and the order with which items are taken for sampling and analysis.

Say we have two independent variables, X and Y. Then a linear combination consists of the sum of a constant multiplied by one variable and another constant multiplied by the other variable. Algebraically, this becomes W = aX + bY, where W is the combined variable and a and b are constants.
The mean of a linear combination is exactly what we would expect: W = aX + bY.
If we multiply a variable by a constant, the variance increases by a factor of the constant squared: variance(aX) = a2 variance(X). This is consistent with the fact that variance has units of the square of the variable. Variances must increase when two variables are combined: there can be no cancellation because variabilities accumulate.
Variance is always a positive quantity, so variance multiplied by the square of a constant would be positive. Thus, the following relation for combination of two independent variables is reasonable:

More than two independent variables can be combined in the same way.

If the independent variables X and Y are simply added together, the constants a and b are both equal to one, so the individual variances are added:

If the variable W is the sum of n independent variables X, each of which has the same probability distribution and so the same variance σx2, then-

It is an indication of the reliability of the sample mean as an estimate of the population mean.
Say the sample consists of n independent observations. If each observation is multiplied by 1/n , the sum of the products is the mean of the observations, X bar . That is,

Then the variance of X bar is –

But the variables all came from the same distribution with variance σ2, so- 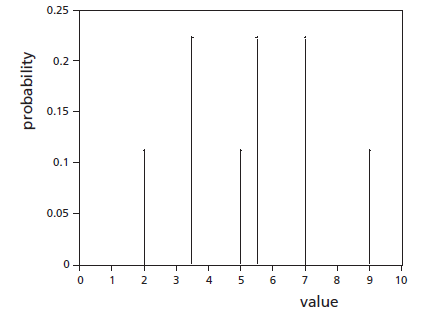 Sampling and Combination of Variables