In this part of the Angular 6 tutorial, we will look at Angular application creation and architecture. Here, we will discuss how to create a demo application, Angular architecture, components and templates, NgModules, metadata, data binding, directives, services and dependency injection, etc.

You can find the following content in this module:

Watch this insightful video on Angular vs React vs Vue:

As already mentioned in our earlier tutorials, Angular is built on the MVC (Model View Controller) framework. Angular team has provided us with an amazing framework having some extremely compelling features, not only for developers but also for designers. No wonder why Angular is being used so extensively.

Let’s take a look at the architecture of this framework.

Now that we know that Angular only plays in the front-end part of the applications, let’s understand the building blocks of the Angular front-end applications. The architecture of Angular consists of the below 8 essential components, all of which are related to each other.

Components in Angular control views (sections on the screen, created via HTML/CSS). In simple words, a component is whatever we can see on the front end of an Angular application. It is the UI part of the application. Components are made up of two elements:

A module is a collection of components. Components are part of a module and can’t exist independently. To maintain the modularity of the Angular applications, we use modules or NgModules. While an application may have multiple modules, it must contain the root module which is generally named as AppModule. Modules can also import other modules to use their functionalities.

Preparing for a Job Interview? Check out our blog on Angular Interview Questions!

Using metadata is how we tell Angular how to process a class. When we use a component, it acts as a class unless we tell Angular that it’s a component, and we do this with the help of metadata. Metadata is attached in TypeScript using a decorator. Decorators are functions that know the configuration of classes and how they are supposed to work.

Data binding aids in the coordination and communication of templates and components.

Angular renders views dynamically and to do that it provides a special class called directives. Directives basically allow us to manipulate the HTML document at the run time. We can use directives to add or remove an element and to add or remove a class to an element. Angular comes with a bunch of in-built directives, but we can also create our own custom directives.

Services in Angular do not have any particular definition. It isn’t bound to any particular component or module and that is why it’s a great way of sharing information across an application. It could be a particular class with a particular purpose. It can be anything that our application needs, be it a value, a feature, or a function.

Watch this insightful video on Angular vs React vs Vue:

To create an Angular application with Angular CLI, we have to run the following command in our terminal:

When we run the above command, Angular CLI will automatically generate a project with the name specified in the command. It will also create all the relevant files and directories for our project as shown in the following screenshot: 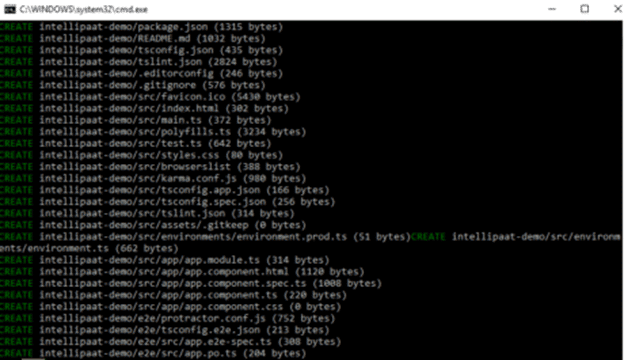 After all the files have been created, we can locate all these files in our system in a directory that is named after the name of our project. We will find that our project has a whole lot of files. We don’t have to worry if we have no idea about all these files. The files of our concern right now are in a folder named ‘app’. It contains five files as shown in the screenshot below:

Now to run this demo application that we have just created, we will move to the directory of our project using the cd command as shown below:

Then, we will use the following command to run the application:

After running the above command, we would see the following output on our terminal:

Our application should be running on port 4200. The app will open up on the browser on its own but if it doesn’t, we will just copy the address mentioned on the terminal and open it on the browser.

And that’s it! We have successfully created an Angular application. Our app should look like the following screenshot:

The DOM (Document Object Model) is an application programming interface offered by Angular. It helps developers and programmers to build efficient documents, navigate through their architecture and also modify the elements of those documents. By modifying, we mean, adding or even deleting any of the elements. This is one of the most important features of Angular as it offers a standardized programming interface that can be easily integrated with any type of environment or application.

The TypeScript feature offered by Angular is preferred by a majority of Front-End Developers. TypeScript helps in efficiently detecting bugs and helps in easy compilation through its automatic populating functionality. Also, it offers rich interfaces, access modifiers, hybrid types, etc. All these combined lead to a reduction in the development time.

With its ‘Testing’ feature, Angular offers web developers ease of testing any part of the application. It allows developers to know what all things have broken every time they save the work.

Learn about Web Development in our blog on Angular 6 features.

Similar to any other tool or framework, Angular has its own limitations. For example- the newer versions of Angular can be challenging to learn for beginner-level developers. Also, there can be difficulty in porting it too. There are many other limitations that are associated with Angular but they don’t make this tool any less than other available tools in its category. We have discussed them below:

The architecture of Angular is very complex as it includes a number of building blocks such as components, directives, modules, dependency injection, templates, pipes, decorators, and even other sophisticated elements such as zones, change detection, and AoT compilation, etc. All these can be challenging to learn for beginner-level developers, especially in the case of newer versions of Angular.

Enroll in our Angular Course in Bangalore to become an expert in angular!

As we all know, SEO optimization and the process are based on the functioning of SEO crawlers. In the case of Angular, it is not SEO-friendly as it offers very limited SEO options and almost zero accessibility to SEO crawlers which makes the SEO optimization inefficient.

Angular does not support easy porting, i.e. it is very difficult to migrate legacy js or jquery-based codes to the Angular architecture and framework. Not only this, but every release becomes difficult to upgrade. All this is the reason why some companies deter from using Angular.

Angular’s high verbosity and complexity of usage make it a bit behind other front-end tools available.

This tutorial touched upon the architecture and the creation of Angular Applications. It also shed light on the features and limitations of Angular. Now that you are well-versed with the basics of this tool’s architecture, we recommend you to further develop your skills in Angular through a certification that will also help you in getting a practical hands-on.

Having doubts? Drop it on our Web Development Community!