Home / Blog / What is Apache SolrCloud?

Apache SolrCloud is a highly flexible and distributed data processing engine which facilitates searching and indexing of files to be performed on a distributed network which in turn makes the system exceptionally agile.

Apache SolrCloud is an extension of Solr 4.0 encompassing new features and functionalities. This extension of Solr is highly scalable, fault-tolerant and distributed in nature that allows the users to perform real-time searching, configuring the centralized cluster, etc. Unlike the old master-slave cluster, SolrCloud automates many of the processes with the help of Zookeeper. Precisely SolrCloud aims to provide a seamless flow of operations by automating the tasks that were performed manually in master-slave cluster.

In order to understand the architecture of SolrCloud, one should be familiar with the following terminologies:

Why should we use Apache SolrCloud?

After learning about the architecture, you must have gotten a fair idea about what comprises of SolrCloud cluster. However it is also important to know why you should use SolrCloud despite having other applications providing similar functionality. Read below to know:

Architecture of Apache SolrCloud: A brief comparison with master-slave cluster

There are some minor differences between these two architectures which result in drastic changes in the outcomes. Let us see what those changes are:

Unlike master-salve cluster, SolrCloud architecture requires additional ZooKeeper Nodes. This clearly indicates that the normal size of a SolrCloud cluster is much bigger than master-slave. However an important point to be noted here is that these nodes of ZooKeeper are not required to be specifically powerful as their roles are limited to monitoring and maintaining the status of the nodes. Since latency plays more important role than the computing power, hence the ZooKeeper nodes remain as the minimal machines as long as they are serving the purpose. Collection API’s and CoreAdmin API’s are introduced in this version, which is a big improvement over the older versions. 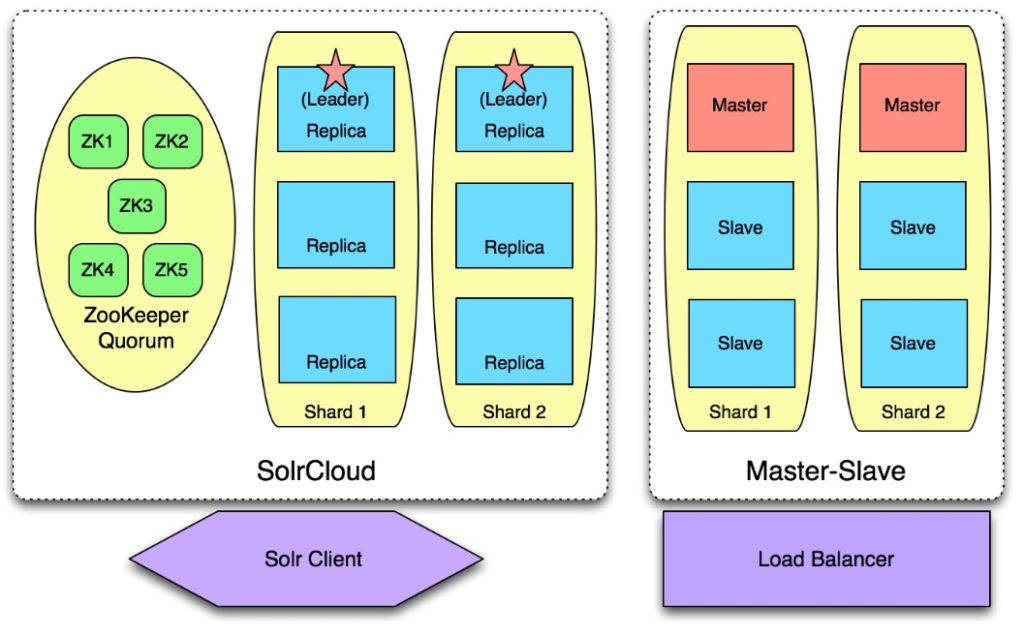 With massive amounts of big data generating everyday minute, it is utmost important for the companies to index and classify the data in such a way that make it highly searchable by the users. Many of the technologies fail after certain extent and provide cluttered and ambiguous responses. However Apache SolrCloud addresses this issue by implementing appropriate indexing logic which helps the users to access the data easily.

Though SolrCloud still requires refinement in its existing functionality but it is getting better with every new release. It is evident that the graph of SolrCloud is going up with these gradual improvements and better features. SolrCloud has already automated many of the features which were previously performed manually. There are many more features which are supposed to be inculcated in coming years.

When is Apache SolrCloud suitable for you?

Apache SolrCloud provides various benefits over other similar technologies. But how to decide in which cases it would be beneficial to use SolrCloud? Read below:

First, SolrCloud allows the users to continue working on the technology for a long time without any interruption till at least one server is present and is hosting every shard. Moreover it is also possible to get the documents back even if all the servers are down. Second, if you are working on a big cluster, the servers or nodes may fail sometimes. However while using SolrCloud the user would not have to worry as even if the leader node is killed accidentally, the new leader is automatically chosen by the system and the entire process resumes.

Third, many of the processes were manually done by the users such as talking to the shards, adding documents to the shards, etc. SolrCloud automated these activities by introducing latest features into the older version.

Want to know more what is Apache SolrCloud all about? Refer to this extensive Apache Solr Tutorial!

Who is the right audience to learn Apache SolrCloud?

However, having a basic knowledge of Big Data Hadoop and HBase is recommended to the beginners.

How will Apache SolrCloud help in your career growth?

A report by indeed.com reveals that the Implementation experts of Apache Solr earn around $105,000 in a month.

Moreover the job portals are overwhelmed by the availability of postings demanding Solr professionals. With the big data market growing bigger every day, the opportunities for beginners and experience holders are only going to grow in future allowing the candidates to find better Apache SolrCloud jobs as per the expertise.

1 thought on “What is Apache SolrCloud?”