Home / Blog / Which is the Best Programming Language for Machine Learning?

Which is the Best Programming Language for Machine Learning?

The technology landscape is shifting towards intelligent machines holding the key to an advanced and innovative future. With the big leaps in technology and research, this concept seems to be converting into reality making artificial intelligence and data science gain a strong foothold.

Now that the paradigm has taken a 180 degrees turn, simple problem-solving approach has taken a back foot and complex algorithms and heuristics are playing major role. However with the constant evolution of machine learning a strong and versatile programming language is what developers look for. MATLAB, R, Python, Java, ELM, etc., have gained immense popularity as programming languages, but which one is the most promising language for machine learning among all? and why?

Let’s do a comparative analysis of these languages:

Watch this AI vs Machine Learning vs Deep Learning video:

Who is the winner?

Though all the aforementioned languages are suitable for different use cases, a developer should particularly know which language to choose when it comes to machine learning. According to a report published back in 2015, R programming was considered to be the most preferred programming language for analytics, data mining and data science purposes. However Python has made a strong impact on the data scientists over the past few years gaining the dominance of 75% adoptability in comparison to other languages.

Moving ahead from being a simple data processing tool Python has now become a leading data analytics tools with 61% developers using Python as their primary language for coding, as per PyCharm.com. 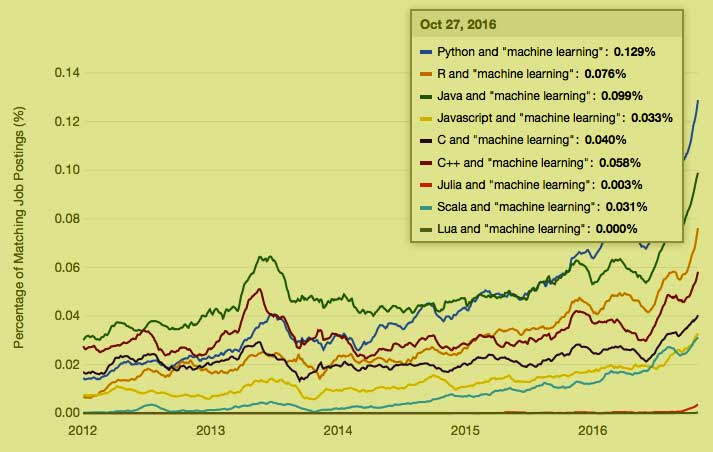 Moreover a research conducted by Indeed.com shows the growth trends of 9 different languages, where Python has come out to be the most demanding programming language for machine learning following R on the second place and Java on the third. Though both R and Python are growing exponentially but with improved analytical tools and more activities Python is gradually displacing R.

Python being a general-purpose language supports diverse activities like web development, artificial intelligence and data analytics which in turn has made it gain momentum among the programmers.

As per TIOBE index, Python is the 4th most popular programming language out of 100.

However it is important to know the factors driving its success, which are:

Which language do you want to choose?

The selection of programming language depends on the use-case and using a strong language is utmost important for developing a high-end software product.

While a developer having a in-depth statistical knowledge may find R Programming Introduction to be the best fit, an individual having a good grasp of programming may find Python or Java suitable. Hence it is extremely important for you to first analyze the kind of use-case you are dealing in and then opt any programming language.

Watch this How to Learn Machine Learning Video:

Enrol yourself in Apache Mahout Training and give a head-start to your career in machine learning!

What is HR Analytics ?

What is Healthcare Data Analytics ?

Types of Analyst Roles in 2022

Which is the Best Programming Language for Machine Learning?