In this part of the Cognos TM1 tutorial, you will learn about the TurboIntegrator, six tabs within each process, and various functions used in TurboIntegrator. Also, you will get to know the advanced TM1 TI scripting techniques to enhance the capabilities of TurboIntegrator, create subsets and attributes, and so on.

TurboIntegrator is a component of IBM Cognos TM1 solutions, which is used to create cubes and dimensions based on data sources such as flat files and Open Database Connectivity (ODBC). With TurboIntegrator, a developer can create and schedule chores, implement ETL capabilities, and utilize advanced scripting features of Cognos TM1.

Below are the topics you will be reading about in this part of the IBM Cognos TM1 tutorial:

Most applications built with Cognos TM1 require some way to perform data ETL, which is an acronym for extract, transform, and load. It is a process that involves extracting data from an outside source, transforming it into some form to fit an operational need, and then loading that newly formatted data into a target.

Check out the career-oriented Cognos TM1 Training to move ahead in your career.

TM1 TurboIntegrator is the programming or scripting tool that allows you to automate data importation, metadata management, and many other tasks.

Within each process, there are six sections or tabs. They are as follows: 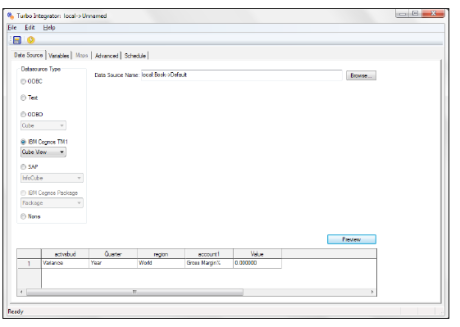 Two additional variables to be aware of are:

Additionally, the process may also read a location to write exceptions or errors that may occur during the processing:

Then, you can build your exception variable:

Finally, you can use some of the previously mentioned process variables to set up your data source (here, an ASCII text file is used as a data source):

# — set the data source info for this process

Another advanced technique is to programmatically define a view in a TI process and then set that process’s data source to that view name. It is not that uncommon to define a view to zero-out cells in a cube to which the process will load the incoming data, but it is a little more interesting to define a view that will be read as input by the process itself.

It allows you to execute a TI process from within a TI process. The format is as follows:

The most important return values are as follows:

The ItemSkip function can be used to skip a record or row of data.

It is worth mentioning the following functions available in TI:

These processes are important because they can be used to:

This function sets all data points (all cells) in a named view to zero. It is most often used after defining a very specific view.

This function is provided to publish a private view to the TM1 Server so that other TM1 Clients can see and use the view. This was not possible in early versions of TM1 unless you were a TM1 Administrator. The format of this function is:

The arguments (parameters) passed to the function are extremely important!

This is an important function as you can use this to avoid runtime TI-generated errors, but when using it before each cell, you need to insert the following lines:

This function saves all TM1 data from the server memory to disk and restarts the log file—IBM.

To avoid this problem, you can use the SaveDataAll function. However, it is important to use this function appropriately as if this function is used incorrectly, it can cause server locks and crashes.

SubsetGetSize is a useful function that returns a count of the total elements that are present in a given subset.

The following functions can be used to maintain cube rules and feeders:

To improve performance, you can define feeders as persistent. TM1 then saves these feeders into a .feeder file. These feeder files will persist (remain) until they are physically removed. You can use the DeleteAllPersistentFeeders function to clean up these files.

This function can be placed in the prolog section of a TI process to force TM1 to perform as if the cube to which the process is querying has SkipCheck in its rules—i.e., it will only see cells with values rather than every single cell.

This function will load a cube’s rule file from a properly formatted text file. If you leave the text file argument empty, TI looks for a source file with the same name as the cube (but with a .rux extension) in the server’s data directory.

This function creates a subset based on a properly formatted MDX expression.

MDX is a powerful way to create complicated lists. However, TM1 only supports a small number of MDX functions (not the complete MDX list). The format of this function is as follows:

This is a function that you can use to execute a command line. The great thing about this is that you can do all sorts of clever things from within a TI process. The most useful among them is to execute an external script or MS Windows command file. The format of this function is as follows:

Here, CommandLine is the command line that you want to execute, and the Wait parameter will be set to either 1 or 0 to indicate if the process should wait for the command to complete before proceeding.

Learn more about IBM Cognos from this Cognos Analytics Training to get ahead in your career!

The Maps tab in TM1 is used to specify how the data from different sources maps with cubes, dimensions, attributes, and consolidations in the database. A single TI Map consists of a series of sub-tabs, where each tab allows you to map your data variables to existing TM1 metadata structures. The sub-tabs you map may vary in size based on the type of values your source data is holding.

The Map tab consists of the following sub-tabs:

Based on the options selected in the TurboIntegrator Editor, the Advanced tab has many sub-tabs used to display the statements generated by Cognos Table Manager. In the Advanced tab, users can also define parameters for the process they want to execute. There are several sub-tabs such as parameters, prolog, metadata, data, and epilog that provide specific information about each process.

Below is the table that describes each of these sub-tabs with the items used to perform certain operations:

The Schedule tab is used to schedule one or more processes to execute at regular time stamps. There are three main items that help users define a schedule for the process:

The Advanced tab in TM1 TurboIntegrator helps a user create or change the existing parameters and pass them to various processes, thereby making the TI process more efficient. These parameters can be added to a process at the runtime or during the edit process procedures.

To edit a process, the user has to create scripts that incorporate both TI functions and TM1 rules functions. There are three main steps for scripting a process in Cognos TM1 TurboIntegrator:

For scripting, there are four main procedures that need to be executed in sequence. Within each procedure, several statements are created based on the options selected in the TurboIntegrator window.

These procedures can be edited by adding custom statements incorporated by TurboIntegrator functions and rules functions. The procedures contained within each process are Prolog, Metadata, Data, and Epilog.

Order of Operations within a TurboIntegrator Process

After editing the Prolog, Metadata, Data, and Epilog of a procedure, you need to move forward to the next step in Advanced TM1 TI Scripting, i.e., creating subsets. You can create subsets for new dimensions from the Subsets process in the TurboIntegrator window.

You can change the parameters and apply filters on your data sources based on the requirements and the result you want to achieve. If you want to keep all the variables but change the data source, you need to specify how your variables should be handled. After that, you can Select All Variables and execute the process. The newly created subset will be reflected in the Server Explorer’s newDim dimension.

The Attribute function in TurboIntegrator assigns the value to a string element, and it is denoted by AttrPutS. Following is the syntax for assigning a string to the attribute in a specific dimension:

Below is the procedure to create an Attribute in TurboIntegrator Scripting:

You can view your assignment after assigning the attribute values as follows:

In this example, you can define an alias attribute on the version dimension and use it to refer to whatever version of the forecast is currently running (or is the working version). Then, TI processes can refer to a version as the working forecast (the alias) and always connect to the correct version.

In TurboIntegrator, you can turn on (or turn off) cube logging using the function, CubeSetLogChanges. However, you have to be very careful to understand when and why to turn on (or off) cube logging. If data changes are to be made to a cube with your TI process and you need to ensure that you can recover those changes in the event of a server crash, you need to assure that logging is turned on. If it is not important to recover changes made by the TI process, it is better to set cube logging turned off to improve performance.

For example, you can copy a version of the forecast to a reporting cube from the source cube, where cube logging is not that important.

In the Contents column of the TurboIntegrator Variables tab, you can indicate what you want to do with the data in that variable. The options are as follows: