The Cognos TM1 Components are divided into two basic types as follows:

Most of these components are installed by default with a standard installation of the product, but some are not.

The TM1 Client (basic) is accessed through Microsoft Excel as an add-in and will allow limited access to available TM1 Servers. TM1 Client does not allow administrative access to any TM1 Servers. It does not also offer the ability to set up and run a local TM1 Server. During the installation, a local version of TM1 Server is installed and can be accessed by TM1 Client, TM1 Perspectives, or TM1 Architect.

With TM1 Perspectives, you can access data within TM1 Servers, and you can also create and maintain TM1 objects and data on both local and remote TM1 Servers. 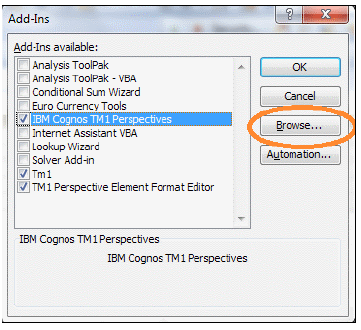 The TM1P add-in file is usually installed during installation to the directory folder CognosTM1 bin.

The Tm1p.ini file is important because that is where you can set the parameters that change the user’s TM1 Perspectives experience.

Go through this Cognos Tutorial to learn more about this BI tool.

TM1 Architect is a standalone TM1 Client application (meaning that it does not plug into Microsoft Excel) and is used to create and maintain data and metadata on both local and remote TM1 Servers.

You can have both TM1 Perspectives and TM1 Architect open and running at the same time on your machine while accessing the same or different TM1 Servers.

This interface may be used by more experienced developers to create C++ and VB applications that interact with TM1.

OLE DB Provider is a software component used to access the data from different sources such as SQL Servers, Excel spreadsheets, Q data feed, and CSV files in a uniform manner. In OLE DB Provider, OLE stands for ‘Object Linking and Embedding,’ and DB stands for ‘Database.’ It can also be written as OLEDB or OLE-DB.

Compared to its successor Open Database Connectivity (ODBC), OLE DB Provider can access information from more complex databases, such as Oracle, Sybase ASE, Microsoft SQL Server, and Email systems, and convert them into simple data sources such as Excel spreadsheets or text files.

Cognos TM1 use the following sequence for requesting and accessing data:

Although older versions of SQL Server Client libraries are no longer supported, Cognos Native Client connections can be used for the applications that only access SQL Server database through OLE DB Providers, which includes SQLNCLI11. You can also use Microsoft ODBC driver parallel to the current SQL Server Native client versions supported by SQL Server 2012, 2014, and 2016.

Cognos Insight is a standalone solution for analyzing different types of data with a dynamic and highly personalized interface. Cognos Insight makes it easier to answer business questions with the help of ‘What if’ dashboards and scorecards and access and visualize the corporate data for better analysis.

It provides an easy-to-use interface and can integrate with IBM Cognos TM1, IBM Cognos Express, and IBM Cognos Business Intelligence.

It allows a user to build models that consist of cubes, links, dimensions, and rules, create applications by assigning a workflow, set up security measures, and then deploy, administer, and maintain them.

In Cognos Performance Modeler, the user can map the sources with the target data and add new objects to the model for creating model designs and dimensions.

TM1 server components are the ‘heart’ of TM1. These IBM Cognos components run on a machine, receiving and replying to all requests from TM1 Clients.

During the installation, the TM1 Admin Server is automatically set up as a machine service for you. When TM1 Servers start, each of them registers itself with the Admin Server that is running on a specified Admin Host.

In the following screenshot, three Admin Hosts (host1, host2, and host3) are listed, and therefore, all TM1 Servers currently running on these machines will be visible in these users’ TM1 Server Explorer. 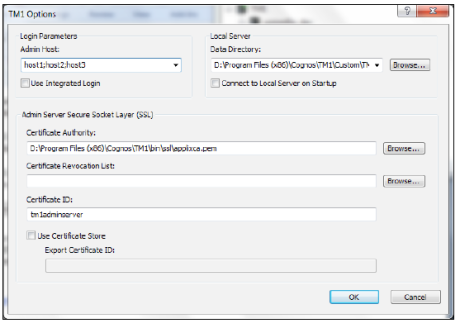 Some of the most interesting (and important) parameters that are contained in the configuration file are as follows:

TM1 server is the process that manages all requests from all TM1 Clients. It loads the names of all available permanent objects (cubes, dimensions, and so on) into the machine’s memory and responds to client requests by performing calculations, consolidations, and updates as required.

Multiple TM1 Servers can be viewed and accessed through a single TM1 Server Explorer (via TM1 Client, TM1 Perspectives, TM1 Architect, or TM1 Web) if it is configured properly.

Setting up a worksheet reference:

TM1 Top is a TM1 ‘utility’ that enables you to dynamically monitor and manage threads (active user sessions) running on an instance of a Windows or UNIX TM1 Server. When TM1 Top is installed, it sets up a Tm1Top.ini file that you can configure to point to the TM1 Server that you want to monitor. Using a text editor such as Microsoft’s notepad, you can edit the file and provide your server name and the machine (or admin host) that the server is running on. Also, if you provide a log file name, TM1 will write a snapshot of its display to the file in regular intervals.

Cognos TM1 Applications are used as virtual folders to organize the shortcuts of other TM1 files, objects, and URLs and create job-specific groups. For example, you can create a group where you organize all the objects, URLs, and all other files related to the sales in a particular country.

In this way, TM1 Applications provide an easy way to organize and access the target objects whenever needed.

TM1 operations track the TM1 Server Activity and store it in a log file. There are three types of logs that a user can set up and view:

Some components in Cognos TM1 are not installed by default. You need to install and integrate them externally.

Cognos TM1 application for smartphones and tablets allows a user to connect with the TM1 Server. Now, the mobile user can access the cube views in a chart or grid format. Also, the user can change the values on the app and update the Cognos TM1 Server from the mobile application.

An Excel-based tool that authors use to build sophisticated reports against multiple databases with multiple queries and sheets.

Get the Cognos Analytics Training for a great career growth.