In this part of the tutorial you will learn about TM1 rules, how the TM1 rules work, combinatorial explosion, area definition and its syntax, various operators, conditional logic, rules performance and behavior.

Using TM1 Rules, you can:

The Cognos TM1 Rules Editor is a .NET component and therefore, to run it on your machine, you must first install the Microsoft .NET Framework 3.5 SP1. Errors will occur if you attempt to use the Rules Editor when .Net 3.5 SP1 is not properly installed.
To access the Rules Editor, you can use TM1 Server Explorer. Right-click on a cube (the cube you want to define a rule for) and from the menu select Create Rule… (if there are no rules already associated with this cube): 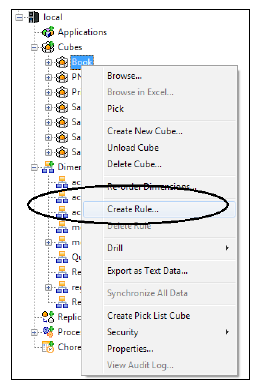 You can select Edit Rule… if one or more rules already exist for this cube.
Get the Intellipaat Cognos TM1 certification training and move ahead in your career.

TM1 rules are compiled one by one when the rules file is saved. TM1 stops compiling the rules when it encounters its first rule compile error. For example, if there are three compile errors, you would perform the following steps:

Successfully compiled TM1 rules are stored in files called cube_name.rux. When you create a rule, TM1 also generates a file called cube_name.blb, which contains format information for the Rules Editor.

Rules – how do they really work?

Here is the sequence of events:

Check the Intellipaat Cognos Course as a first step towards mastering the Cognos TM1 tool.

During consolidations, TM1 uses a sparse consolidation algorithm to skip over cells that contain zero or are empty. This algorithm speeds up consolidation calculations in cubes that are highly sparse. A sparse cube is a cube in which the number of populated cells as a percentage of total cells is low.

In mathematics, a combinatorial explosion describes the effect of functions that grow very rapidly as a result of combinatorial considerations.

A calculation statement consists of the following:

Looking for Top jobs in Business Intelligence ? This blog post gives you all the information you need!

Using areas, you can specify which calculations apply to different parts of a cube.
Some valid area definitions include:

To create a valid area definition you must:

You can use the syntax ‘dimensionname’:’elementname’ to specify elements that are not unique to a single dimension or for dimension names that contain special characters. A good example is when you have to reference one of many control objects that are built into TM1. These objects contain the curly brace (}) special character. Using the previously mentioned syntax, you can write an area definition that defines the ADMIN group in the Groups dimension as follows:
[‘}Groups’:’ADMIN’]

The CONTINUE function and area definitions

Rules are applied sequentially. Therefore, if two rules reference the same cells defined by an area definition, the first rule encountered gets applied to the cells. You can utilize the CONTINUE function to apply additional rules to the cells.

Numeric, consolidation, or string (oh my!)

You will need to be able to interpret the following rule syntaxes:

Rule formulas can include numeric constants, arithmetic operators and parentheses, functions (those that are valid in rules), conditional logic, and references to data in other cubes.

There are some basic points you should know about numeric constants:
Simplest components of a rule calculation

There are some basic points you should know about arithmetic operators:

Cognos TM1 Rules can be written to have conditional evaluation. You can use the IF function to force TM1 to evaluate a rule differently depending on a logic test. If you are familiar with Microsoft Excel, you will be able to recognize the format:
IF(Test, Value1, Value2)
Along with the important IF function, you need to be aware of the operators you can use in TM1 for comparing values. They are (the expected) greater than (>), less than (<), greater than or equal to (>=), less than or equal to (<=), equal (=), and not equal to (<>).
To compare two string values, you must insert the @ symbol before the comparison operator.
You also need to be able to combine expressions within a TM1 rule by using the logical operators And (&), Or (%), and Not (~).
String values in Cognos TM1 can be joined (concatenated) together by using the pipe (|) character—just be sure to test the combined length of the resulting expression as TM1 only allows a single string to be up to 255 bytes. 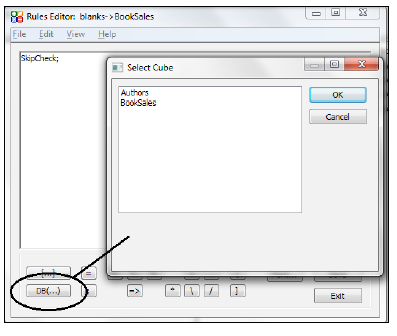 The Cognos exam specifically references the DB function and its use.

Cognos TM1 allows you to create a link between two cubes that have related data. Keep in mind that this type of rule must be defined as a string.

There are some important facts about Rules:

Cognos TM1 Rules is very powerful but not always the best way to calculate results.

The more rules you implement the more overall cube performance will be impacted. Specifically, the native consolidation ability of TM1 will slow down. To address this performance issue, you must make use of the SKIPCHECK and FEEDERS declarations.
Adding rules to a cube will impact TM1’s ability to utilize its sparse consolidation algorithm. Fortunately, you can tell TM1 where to look for rules-derived values.
The SKIPCHECK declaration should be placed in the cube’s rule file. This turns on the TM1 sparse consolidation algorithm. The FEEDERS declaration indicates that you have provided feeder statements which will ensure that the correct cells are not skipped during consolidations.
Another declaration to be aware of is the FEEDSTRINGS declaration. This must be used if any of your rules define string values. This will ensure that string values are fed properly (in the same manner as described above for the FEEDERS declaration).

To improve the reload time of cubes with feeders, set the PersistingOfFeeders configuration parameter to true (T) to store the calculated feeders to a feeders file. Any installation with a server load time of over five minutes can probably improve its performance using this parameter.

You can edit the Cognos TM1 configuration file to add the parameter PersistingOfFeeders=T. When this parameter is set and a cube with rules is saved, the feeders are stored alongside the cube data in a .feeders file. The cube files are called cube-name.cub and cube-name.feeders. The best way is to use a TI process and the DeleteAllPersistentFeeders() function to delete all persistent feeders.

You will have to re-calculate all of your feeders periodically by using the DeleteAllPersistentFeeders() function (within a TI process) and then restarting the TM1 Server.

There are some important guidelines for simple feeders:

There are some key facts about Rules Tracer: