What tables are to relational databases in the way cubes are to TM1. Almost all data stored in TM1 is stored in and accessed from cubes.
There are two ways to create cubes:

Learn more in this Cognos course content to better understand the important aspects of Cognos TM1
Each and every TM1 cube must have at least two dimensions and a maximum of 256 dimensions.

You create a cube with dimensions, and dimensions identify how to organize the information or data that you want to track and report on. Each element in each dimension identifies the location (or “x-y coordinate”) of a cell in a cube.
There are four ways to create dimensions:

Get the complete Intellipaat Cognos TM1 training for grabbing the top-paying jobs in the market.

Dimensions are made up of elements. TM1 currently supports three types of elements:

Warning! Once your dimension is a part of the cube that contains data you must be very careful while changing any element properties to prevent loss of any data loaded to that element. The Dimension Element Properties dialog is used to make the changes to the selected element. 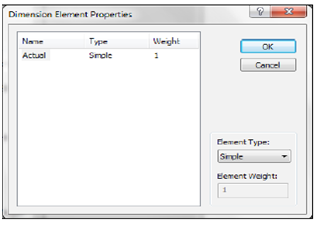 One of the key things to understand is that TM1 will quickly and efficiently aggregate numeric element values for your reporting. Aggregation is automatically applied in TM1 while building a dimension using something called hierarchies. A hierarchy is a way to organize data at different levels of aggregation.
It is important to understand that aggregation calculations will be based upon each element’s “weight”. IBM refers to this as the element’s weight factor. Weight factors determine the contribution of an element to a consolidation. The default element of weight is one.

By using dimension hierarchies, you can easily aggregate numeric data into categories that are meaningful in your analyses. Each category corresponds to an aggregation of detail for two or more elements in a dimension. In TM1, elements that represent aggregations are called consolidated elements or consolidations.

In addition, to define an element’s type (numeric, consolidation, or string), elements can have attributes defined for them. If elements identify data in a cube, then think of the element attributes describing the elements themselves.
Some interesting uses for attributes include:

TurboIntegrator processes will be the tool used to add, update, and delete your dimension attributes. You use the following programming functions:

This is another important point. The }ElementAttributes cubes are known as Cognos TM1 control cubes. These cubes are automatically generated by TM1.
Read these Top Trending Cognos TM1 Interview Q’s that helps you grab high-paying jobs!

When you create a dimension, an attribute named format is created for you automatically by TM1. This attribute can be used to set a display format for each individual numeric element. Display format attributes can also be set programmatically with a TurboIntegrator process using the AttrPutS function. Just remember to add the c: to the format string to indicate that it is a custom format:
AttrPutS(‘c:###,###.00’, myDimensioName, myElementName, ‘Format’);
The Cube Viewer will display the format to use:

Follow the next steps to create dimensions using the Dimension Editor window:

After creating your dimension with the Dimension Editor, you can then use it to make modifications to that dimension. You can:

Ordering elements in a dimension

The order of elements in a dimension is very important! When you add elements to a dimension, TM1 assigns an index number to each element automatically. TM1 uses the index internally to keep track of the elements. You simply order the elements as you want them to appear in the dimension (see the sort options functionality of the Dimension Editor). 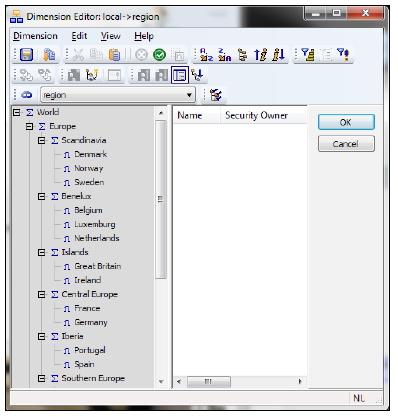 Setting the order of dimension elements from the Server Explorer

You select a sorting property for the dimension from these three automatic sort orders:

The mechanics of manually creating a cube is simple; from the TM1 Server Explorer, you can just click on Cubes | Create New Cube and then fill in or select the required information. Some interesting and therefore important facts about the mechanics of cube creation are:

The most flexible and effective method to load a cube with data is through the use of a custom Turbo Integrator process. This process can read data from any number of data sources such as such another TM1 cube, an external database, or a flat ASCII file.

Click on Cubes in Server Explorer, TM1 will display a list of all the cubes in the instance along with each cube:

Click on an individual cube and view similar information about the specific cube.
List of all dimensions that make up that cube

Lookup cubes are cubes that you can set up and which can be used to support other cubes within a TM1 application. These cubes are usually read-only to the user and may contain calculations or reference data that are then pulled into other cubes using TM1 rules.

The security control cubes are used to apply security privileges for TM1 objects including cubes, dimensions, processes, and chores to user groups on a TM1 Server.

These cubes assign clients to user groups and store properties for all clients on the TM1 Server.

These cubes store attribute and property values for objects on the TM1 Server.

The four control cubes that hold performance statistics for clients, cubes, and servers are as follows:

Once an individual cell holds is set on, Cognos TM1 creates a control cube named }Hold_ followed by the user ID and cube name to control the status of holds for the cube.

Depending on your access privileges (you need to be a TM1 Admin), you can copy cubes from one server to another, and synchronize the data between the cubes.

Replicating your cubes between your servers

Get familiar with the top Cognos Interview Questions to get a head start in your career!