What is Multi-Threading in Java?

In the above picture, for each deposit or withdraw, separate threads will be allotted for each user.

Threads can be created in two ways:

Get ready for the high-paying Java jobs with these Top Java Interview Questions and Answers!

Know the major differences between today’s most prominent languages in the IT industry, check out this Java vs Python blog!

sleep() is a method in Thread class that is used to sleep the currently running thread for few milliseconds.

Thread scheduler contains the pool of threads. When threads are started in a program by start() method, then each thread is kept in thread scheduler.
There is no assurance to which thread will get the chance first in the processor. Thread with more priority will be operated first.
JVM has some threads for the execution of a program:

If you have any doubts or queries related to Java, get them clarified from the Java experts on our Java Community!

Main thread will be joined at the end of t1.

T1 thread will be joined at the end of t2.

Want to know why majority of Java Developers are moving towards Hadoop? Get to know in this 7 Reasons You Should Switch Career From Java to Hadoop blog!

Life Cycle of a Thread 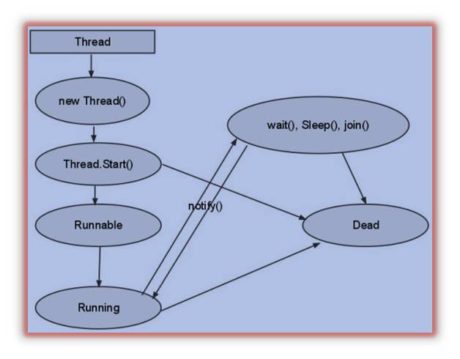 When you create the thread, then Thread state is NEW.

When you start the thread, then will be placed in Ready To Run state and it will wait for CPU time.

When you call sleep() method then the current running thread moves to Sleeping state. Thread will remain in sleep state for a specific time. Once the thread’s sleep will be over, it will move to Ready to Run state automatically. Sleep state is also called timed waiting state.

When you call wait method, then the currently thread move to wait state till you call method notify() or notifyAll() or when the specific time is over.

When a running thread is requesting unavailable resources then thread will move to block state. Thread in Block state will move to Ready to Run state when requested resources is available.
Blocked states may lead to deadlocks.
Consider the following case: 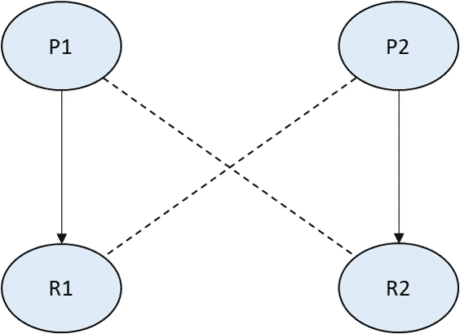 In the above case,

In this situation, no one will act first because each of them is waiting for others to release first. This is called Deadlock.

This brings us to the end of Multi-Threading. In this tutorial, we learned in detail about the overview of Multi-Threading.
We also covered almost all the main parts of Multi-Threading. If you want to learn more, I would suggest trying our Intellipaat “Java” course that covers in-depth knowledge of most of the important topics like Basics of Java, Array, Exception Handling, Multi-threading, etc. to make you a good Java programmer.
Join Intellipaat Java training course and Certification today and let your career boom towards the domain of Software Developer.

Enrol yourself in Java Certification Course and give a head-start to your career in Java!