In this part of the PL/SQL tutorial, you will learn about PL/SQL packages, why they are used, and what are their two components including examples of package specification and package body. You will also learn how to create a package in PL/SQL along with product-specific packages.

The following are the topics that are going to be covered in this tutorial blog:

What are PL/SQL Packages?

A package is a schema object that groups logically related PL/SQL types, variables, and subprograms. Packages usually have two parts, specification or spec and body; sometimes, the body is unnecessary. The specification is the interface to the package. It declares the types, variables, constants, exceptions, cursors, and subprograms that can be referenced from outside the package. The body defines the queries for the cursors and the code for the subprograms.

Enroll in the PL/SQL Training and give a head start to your career in PL/SQL!

The package specification and the package body are the two fundamental components of a package. They can be described are as follows:

All public variables, cursors, objects, procedures, functions, and exceptions are declared in the package definition. Outside of the package, all the items that are declared in the specification can be accessed. A public element is one of several types of elements. As the package specification is a standalone component, it can occur without the package body. Whenever a package is referenced to, a session-specific instance of the package is produced. All package components that have begun in that instance are valid until the end of the session, once the instance is established for that session.

Example: A Simple Package Specification Without a Body

Come to Intellipaat’s PL/SQL Community if you have more queries on PL/SQL!

A package body must be in the same schema as the package spec. To match subprogram specs and bodies, PL/SQL does a token-by-token comparison of their headers. Except for the white space, the headers must match word for word; otherwise, PL/SQL raises an exception.

Create a Package in PL/SQL

Why Use PL/SQL Packages

The following are the reasons why you should use PL/SQL packages: 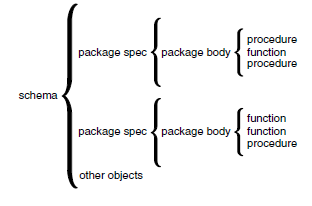 Get familiar with the top PL/SQL Interview Questions to get a head start in your career!

Oracle and various Oracle tools are supplied with product-specific packages that define application programming interfaces (APIs) that you can call from PL/SQL, SQL, Java, or other programming environments.

Package DBMS_ALERT lets you use database triggers to alert an application when specific database values change.

Package DBMS_PIPE allows different sessions to communicate over named pipes. A pipe is an area of memory that is used by one process to pass information to another.