Fundamentals of the PL/SQL Language

This section of the PL/SQL tutorial covers the fundamentals of PL/SQL, components of a PL/SQL line like delimiters, identifiers, literals, comments and so on.

PL/SQL keywords are not case-sensitive, so lower-case letters are equivalent to corresponding upper-case letters except within string and character literals.

A line of PL/SQL text contains groups of characters known as lexical units:
■ Delimiters (simple and compound symbols) – A delimiter is a simple or compound symbol that has a special meaning to PL/SQL. For example, you use delimiters to represent arithmetic operations such as addition and subtraction.
■ Identifiers(which include reserved words) – We use identifiers to name PL/SQL program items and units, which include constants, variables, exceptions, cursors, cursor variables, subprograms, and packages.
■ Literals – A literal is an explicit numeric, character, string, or BOOLEAN value not represented by an identifier.
■ Comments – The PL/SQL compiler ignores comments, but you should not. Adding comments to your program promotes readability and aids understanding. Generally, you use comments to describe the purpose and use of each code segment. PL/SQL supports two comment styles: single-line and multi-line.

Interested in learning SQL? Go through this SQL Tutorial!

You can declare variables and constants in the declarative part of any PL/SQL block, subprogram, or package. Declarations allocate storage space for a value, specify its data type, and name the storage location so that you can reference it.
Some examples follow:

You can use the keyword DEFAULT instead of the assignment operator to initialize variables. For example, the declaration

can be rewritten as follows:

Besides assigning an initial value, declarations can impose the NOT NULL constraint:

The %TYPE attribute provides the datatype of a variable or database column. This is particularly useful when declaring variables that will hold database values. For example, assume there is a column named last_name in a table named employees.
To declare a variable named v_last_name that has the same datatype as column title, use dot notation and the %TYPE attribute, as follows:

The %ROWTYPE attribute provides a record type that represents a row in a table or view. Columns in a row and corresponding fields in a record have the same names and datatypes. However, fields in a %ROWTYPE record do not inherit constraints, such as the NOT NULL or check constraint, or default values.

PL/SQL does not allow forward references. You must declare a variable or constant before referencing it in other statements, including other declarative statements. 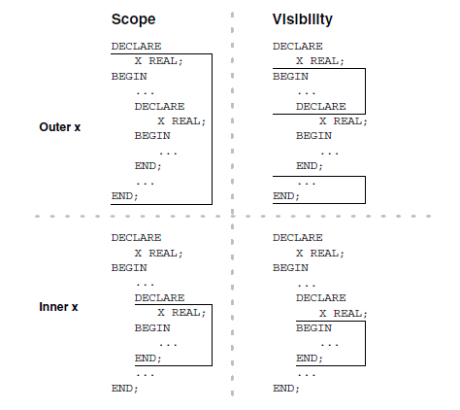 Have you got more queries? Come to our Community and get them clarified today! 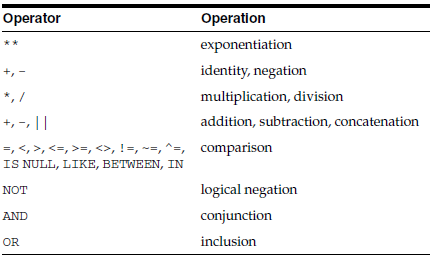 The IS NULL operator returns the BOOLEAN value TRUE if its operand is null or FALSE if it is not null. Comparisons involving nulls always yield NULL. Test whether a value is null as follows:

You use the LIKE operator to compare a character, string, or CLOB value to a pattern. The case is significant. LIKE returns the BOOLEAN value TRUE if the patterns match or FALSE if they do not match.
The patterns matched by LIKE can include two special-purpose characters called wildcards. An underscore (_) matches exactly one character; a percent sign (%) matches zero or more characters. For example, if the value of last_name is ‘JOHNSON’, the following expression is true:

The BETWEEN operator tests whether a value lies in a specified range or not. It means “greater than or equal to a low value and less than or equal to high value.” For example, the following expression is false:

The IN operator tests set membership. It means “equal to any member of.” The set can contain nulls, but they are ignored. For example, the following expression tests whether a value is part of a set of values:

Double vertical bars (||) serve as the concatenation operator, which appends one string (CHAR, VARCHAR2, CLOB, or the equivalent Unicode-enabled type) to another.
For example, the expression

Enroll yourself for PL/SQL Training and give a head-start to your career in PL/SQL!

A simple CASE expression selects a result from one or more alternatives and returns the result. Although it contains a block that might stretch over several lines, it really is an expression that forms part of a larger statement, such as an assignment or a procedure call. The CASE expression uses a selector, an expression whose value determines which alternative to return.

When working with nulls, you can avoid some common mistakes by keeping in mind the following rules:

With PL/SQL you can create applications that generate Web pages directly from an Oracle database, allowing you to make your database available on the Web and make back-office data accessible on the intranet.
The program flow of a PL/SQL Web application is similar to that in a CGI Perl script. Developers often use CGI scripts to produce Web pages dynamically, but such scripts are often not optimal for accessing Oracle Database. Delivering Web content with PL/SQL stored procedures provides the power and flexibility of database processing.
For example, you can use DML, dynamic SQL, and cursors. You also eliminate the processing overhead of forking a new CGI process to handle each HTTP request. You can implement a Web browser-based application entirely in PL/SQL with PL/SQL Gateway and the PL/SQL Web Toolkit.
■ PL/SQL gateway enables a Web browser to invoke a PL/SQL stored procedure through an HTTP listener. mod_plsql, one implementation of the PL/SQL gateway, is a plug-in of Oracle HTTP Server and enables Web browsers to invoke PL/SQL stored procedures.
■ PL/SQL Web Toolkit is a set of PL/SQL packages that provides a generic interface to use stored procedures called by mod_plsql at runtime.

Get familiar with the top PL/SQL Interview Questions to get a head start in your career!

PL/SQL Server Pages (PSPs) enables you to develop Web pages with dynamic content. They are an alternative to coding a stored procedure that writes out the HTML code for a web page, one line at a time.
Using special tags, you can embed PL/SQL scripts into HTML source code. The scripts are executed when the pages are requested by Web clients such as browsers. A script can accept parameters, query or update the database, then display a customized page showing the results.
During development, PSPs can act like templates with a static part for page layout and a dynamic part for content. You can design the layouts using your favorite HTML authoring tools, leaving placeholders for the dynamic content. Then, you can write the PL/SQL scripts that generate the content. When finished, you simply load the resulting PSP files into the database as stored procedures.

Familiar with the fundamentals of the PL/SQL Language? You can head on to our blog on datatypes in PL/SQL.

Fundamentals of the PL/SQL Language