This part of the Selenium tutorial will teach you about What is Selenium IDE?, the installation process for Selenium IDE, so you know exactly how to go about installing Selenium IDE.

Let’s take a look at the topics we’ll be covering in this blog:

What is Selenium IDE?

Selenium IDE (Integrated Development Environment) is a plug-in for the Mozilla Firefox web browser for running Selenium scripts. It allows software testing professionals to control the tests, such as record, edit, play, debugs, etc. It consists of the core of Selenium which executes the tests. It does not just control the tests, but it provides an environment for the scripts to run.

There are various features available in Selenium IDE:

What is Selenese in Selenium?

There are three main classifications of the Selenium commands:

As mentioned above, Selenium IDE can be installed as an add-on in both Firefox and Chrome. Let’s take a look at the procedure to do the same.

Step 1: Launch the Firefox browser and visit the following link

Step 2: Click on the Install button and let it finish the procedure.

Step 3: A pop-up window will appear. Click on ‘Restart Now’.

Step 4: Launch Selenium IDE by going to the Firefox Menu button, clicking on the developer, and then Selenium IDE.

Learn Selenium with industry experts from Intellipaat to clear the Selenium certification exam. 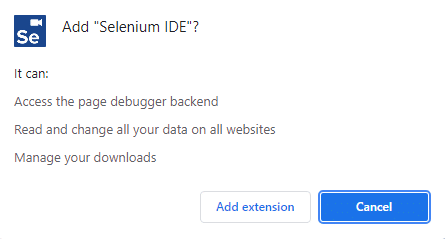 And that’s it. Selenium IDE is now installed on Chrome and you can use it whenever you want!

Selenium IDE is one of the most popular and accessible tools in the Selenium Tool Suite, and it doesn’t require much setting up either. In this blog of What is Selenium IDE? we have covered it, It comes as an add-on for Firefox as well as Chrome. It uses Selenese commands to run tests on web applications. There are both advantages and limitations of Selenium IDE which should be kept in mind before choosing to use it.

Have any doubts? Drop it on Intellipaat’s Selenium Community!