What is Natural Language Processing?

Natural language is a language that has developed naturally in humans. So, in this blog on “What is Natural Language Processing?” we will learn all the major concepts of NLP and work with packages such as NLTK and Spacy.

Consider any of these languages, say, English, Hindi, French, or any of the numerous languages which have evolved naturally in humans through use and repetition without conscious planning can be termed as natural language.

Humans can easily comprehend these languages. But if the same languages are fed to a machine, will it be able to comprehend them? So, this where Natural Language Processing plays a key role.

Natural Language Processing is the ability of a computer program to understand human language as it is spoken.

In other words, Natural Language Processing is used to gain knowledge from the raw textual data at disposal.

You can go through this video on “What is Natural Language Processing?” to get more insights into the concepts.

Watch this video on What is Natural Language Processing?

Now we will go ahead and see, ‘What is Natural Language Processing used for?’

What is Natural Language Processing used for?

Now, going ahead with this blog on “What is Natural Language Processing?” we will look into a use case.

Here is a demonstration of Google Translator. We will type in Google, ‘What is Natural Language Processing?’ in English, and if we want a German version of this, it would be as follows: 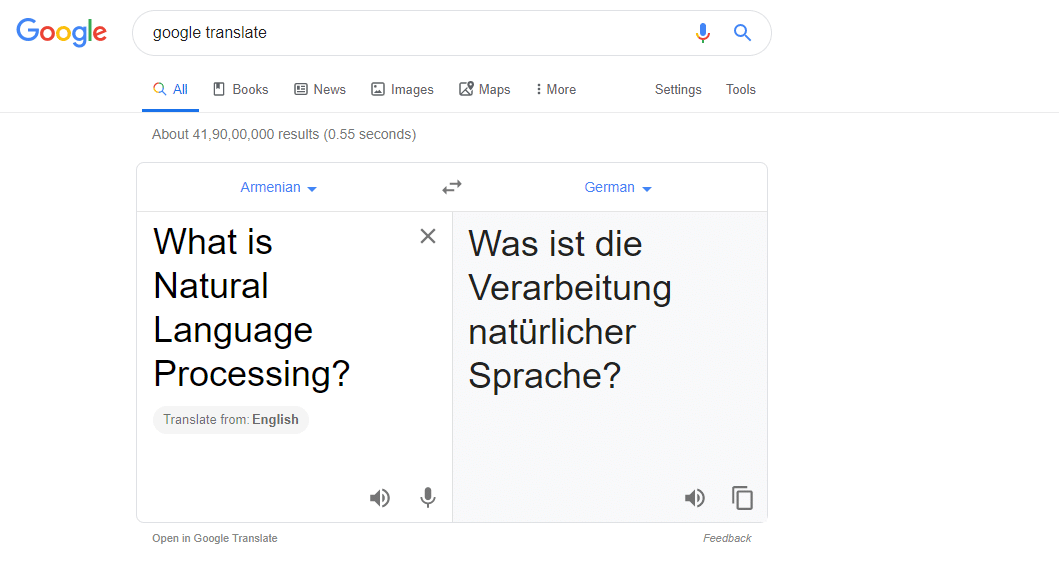 Similarly, we can translate the same phrase into any other language.

What is Natural Language Understanding?

In this blog on “What is Natural Language Processing” Natural Language Understanding, as the name states, deals with understanding inputs given in the form of sentences in text or speech. So, this is where the machine analysis the different aspects of a language.

Let’s look at an example:

We have this sentence ‘What is Natural Language Processing?’

Here, each word in this sentence is taken as a separate token including the question mark.

We can use these tokens for other processes like parsing or text mining.

We are doing this Natural Language Processing using Python programming language. As mentioned earlier, human beings can understand the linguistic structures and their meanings easily. But machines are not successful enough for natural language comprehension yet. So, when a machine has to parse through one word at a time it may not be able to fully understand the semantics of a sentence. And these words when given one at a time are known as uni-grams.

Like in the below image, the sentence ‘What is Natural Language Processing?’ is parsed one word at a time. 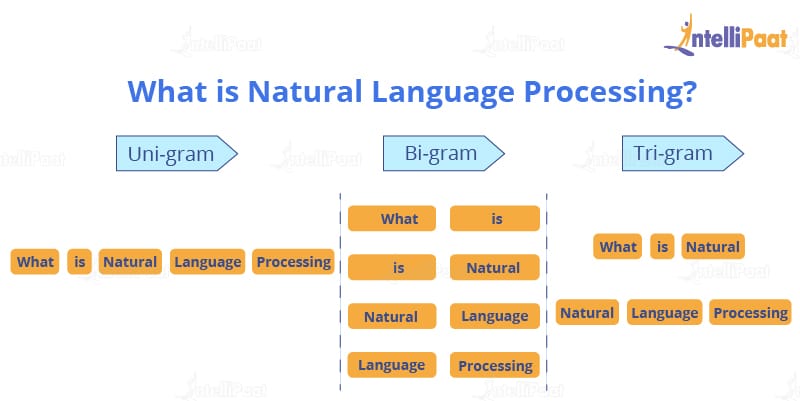 Then in a bi-gram, the sentence ‘What is Natural Language Processing?’ is parsed two words at a time.

Finally, in a tri-gram, the sentence ‘What is Natural Language Processing?’ is parsed three words at a time.

Stemming is the process of reducing a word to its base form and this is done by cutting off the beginning or end of the word. This indiscriminate cutting will be successful in some occasions and will fail in others.

Let us look at an example:

In all these three cases, we can see that only in the third case we have a word that makes sense. So, when we are implementing stemming, it is always not necessary that the final stemmed word we get should have a meaning associated with it.

Now, there are many stemming algorithms available and one such algorithm is PorterStemmer.

Wish to make a career in the world of Data Science? Start with Intellipaat’s Data Science Basics Tutorial!

Lemmatization is the process of reducing words into their lemma (the dictionary form of the word). Here, the base form into which the word is converted should definitely have a meaning associated with it.

So, here we can see that these three individual words have a meaning associated with them.

In English language, words are considered as the smallest elements that have distinctive meaning, and based on their use or function the words are categorized into different classes known as parts of speech. POS tagging is the process of marking or tagging every word in a sentence to its corresponding part of speech.

Here, we marked each of these words with a POS tag.

Now, in this blog on “What is Natural Language Processing?”, we will look at Named Entity Recognition and implement it using the NLTK package and the Spacy package.

It is the process of taking a string of text as input and identifying the relevant nouns such as people, places, or organizations that are mentioned in that string.

For Named Entity Recognition, we will require the ne_chunk function.

After tokenizing these words, we will add POS tags with respect to each of these tokens by using the function nltk.pos_tag and passing these tokens, and then we will store them in john_tags.

Till now, all the tasks were done using NLTK. We also have spaCy which is relatively a new framework in the Python natural language processing environment.

This spaCy is written in Cython, i.e., the C extension of Python that provides C-like performance to Python programs.

This spaCy package has different models, so we will load the en_core_web_sm model and store it in the nlp object.

Note that using this nlp object, we can create different documents. These documents basically contain strings. Each string can be classified as a document.

Now, tokenization is very simple when it comes to the spaCy package. What we have to do is start a for loop and print all of the tokens present in that document.

First, we will create a pattern. A pattern is created as a list of dictionaries. Each dictionary indicates a word. Here, we are trying to match the first word with a Lemma value. So, the first word ‘Lemma’ should be ‘vacate’ and after that it needs to be followed by another word which is ‘white’.

So, basically, we need to extract a substring from this entire doc which is basically two words; the first is the lemma variation of vacate and the second word is white.

Going ahead in this blog on “What is Natural Language Processing?”, we will implement sentiment analysis using the NLTK package.

For doing sentiment analysis using the NLTK package, we will import the required package first.

We will be performing sentiment analysis on the IMDB reviews dataset. This basically consists of 25,000 reviews, and out of these reviews 12,500 are positive and the rest are negative. So, these two are stored in separate folders, pos for positive and neg for negative reviews.

To preprocess all of these reviews, we will start off by creating two empty lists:

The first task in preprocessing is to remove stopwords. Let’s see how to do that.

Now, what we want is a bag of words or a bag of adjectives (because using adjectives is a better way to understand the sentiment of a review).

This for loop starts from the 1st review and goes till the 1,000th positive review.

Now, this all_words will have the combination of all of the negative and positive adjectives. 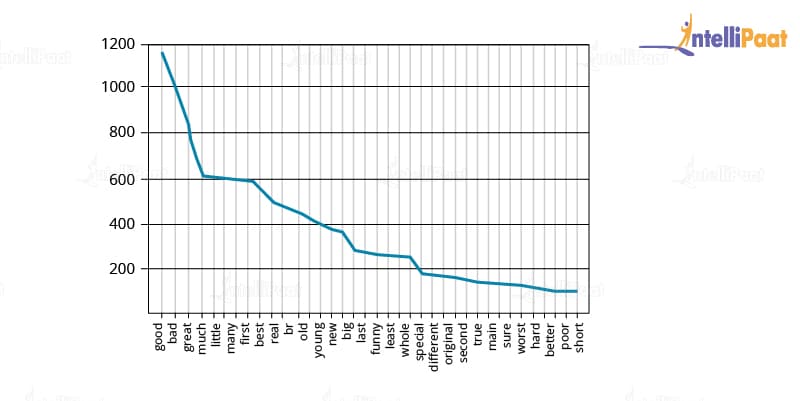 Combining all of these adjectives, which are present in the review, we will get the positive label and this is the training set.

Then, we would build classifiers on top of this training set, and once the learning is done we will try to predict the values on top of the test set and see whether the prediction is correct.

Now, we will start off by implementing the Naïve Bayes classifier and train it on top of the training set and check for the accuracy on top of the test set.

Here, the ratio of pos:neg is 11.3:1.0 for the first feature. This means that the word ‘powerful’ is 11.3 times more likely to occur in a positive review than a negative review. It is similarly for all the features.

Get ready for the high-paying Data Scientist jobs with these Top Data Science Interview Questions and Answers!

So, we can see that the accuracy decreases as we go from Multinomial Naïve Bayes to SVC classifier.

Here, the highest accuracy is of the Multinomial NB classifier.

Therefore, we can choose this model over all the other models when we are trying to ascertain the sentiment of words.

This is how we can do the sentiment analysis using the NLTK package and the Scikit package.

Know more about ‘What is Natural Language Processing?’ and clear your doubts and queries from our experts on our Artificial Intelligence Community!

What is Natural Language Processing?