The term ‘Deep Learning’ is thrown around a lot these days and it deserves all the hype. Deep Learning is responsible for amazing breakthroughs and breath-taking innovations. Self-driving cars and chatbots are some real-life applications of Deep Learning. So, you must be wondering ‘what is Deep Learning?’ So, in this Deep Learning tutorial, we are going to comprehensively learn about neural networks and Deep Learning.

This image will help you have a clear picture of the terms in your mind to understand the concepts, thoroughly.

Now, in this Deep Learning tutorial, we will comprehensively understand ‘what is Artificial Intelligence?’ and look at the subsets of it.

Artificial Intelligence (AI): It is that field of computer science, where machines are capable of performing tasks which human beings do. An example of this could be the robots used in industries for cutting, welding, painting, etc. These robots are able to perform tasks that are generally performed by human beings. One thing to remember is that Machine Learning and Deep Learning are the subsets of Artificial Intelligence.

What is Machine Learning (ML)?

In ML, we have a set of machine learning algorithms designed in such a way that it gives a machine the ability to make decisions. It learns from a given dataset and makes decisions according to what it grasps. An example of this is a computer chess game, where the software learns from playing multiple games.

What is Deep Learning (DL)?

In DL, algorithms are designed such that their intellectual capabilities closely resemble human intellectual capability. It is done with the help of the beautiful concept called ANN (Artificial Neural Network) which got inspired by human’s BNN (Biological Neural Network). Examples of this are speech recognition and image processing which are used for detecting traffic errors.

Now, these are the general terms which we will focus in this Deep Learning tutorial

So, going ahead in this Deep Learning tutorial, we will look at the categories of Artificial Intelligence.

What is Artificial Intelligence?

Artificial Intelligence is the domain of building smart machines and training them such that they are as efficient as human beings doing a certain task. It is like making a machine intelligent by giving it the potential for decision-making.

Now, let’s look at the categories of AI.

Example: If a robot is told to play a song by Michael Jackson. It will catch the words ‘Michael Jackson’, ‘play’, and ‘song’ and will start playing the song. It will not grasp or know the meaning of what instruction we are giving. They are specifically programmed. Robots used in the manufacturing industry also involve weak Artificial Intelligence.

Strong Artificial Intelligence: The motive behind using this term is to achieve compatibility and potentiality of programs to the point where the machine’s mental reach is equal to that of a human being. But, it is on a conceptual phase; we are still far behind to achieve the perfection to make the machines equivalent to human beings. Machine Learning and Deep Learning come under the category of strong Artificial Intelligence.

Example: Speech recognition, visual perception, and language translation are examples well defined by strong Artificial Intelligence. Like in visual perception, if a machine visualizes a number plate of a car crossing a red signal, it immediately tries to identify the person by searching for the owner of the car, using the number plate it has captured. Since it requires decision-making and it has to work on many tasks such as capturing the image, image processing, i.e., reading the number plate, searching for the owner, and then identifying them, it comes under the category of strong Artificial Intelligence.

Now, moving forward in this Deep Learning tutorial, we will understand ‘what is Machine Learning?’ and look at its types.

Machine Learning and Its Types

What is Machine Learning?

Supervised: In Supervised Learning, the machine gets trained on a specific dataset. This specific dataset is one that has input and output parameters. The output is already tagged with the correct answer. After that, the machine is given a new dataset so that the supervised learning algorithm analyzes the data and produces a correct outcome from the labeled data. It works under supervision.

The below diagram shows a demonstration of Supervised Machine Learning.

Now, the model is trained on a specific dataset and tries to make predictions.

In this type of learning, there is no pre-learning and the machine has to uncover the structure and patterns all by itself.

After the identification of objects, the model makes clusters of similar objects.

Consider a scenario where a car has to start its journey from the initial point of a maze and it has to reach the destination. It will start its journey, and after a few turns when it finds a dead-end it gets a score of −10 as a penalty. Then, it comes back again and starts the journey. Then, after a few turns when it goes the second way, it again finds a dead end and gets a score of −10 as a punishment. The third time, it goes and finds an open way to the destination and scores +10 as a reward. So, from its experience, it learned that it has to go the way which has a fewer number of penalties or we can say that it has to find an optimal path. 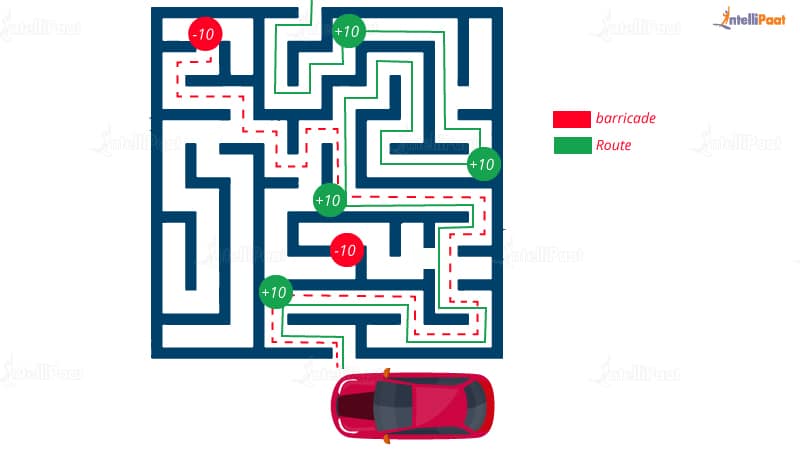 Now, that we have understood Machine Learning and its types, it is finally time to focus on the main topic of this Deep Learning tutorial. So, let’s go ahead and understand ‘what is Deep Learning?’

Read our detailed blog on Deep Learning Interview Questions that will help you to crack your next job interview.

What is Deep Learning?

Deep Learning is the subspace of Machine Learning which works in a progressive manner by having a layered architecture. It has an input layer, a hidden layer, and an output layer.

So, for Deep Learning to be successful and efficient, there should be an ample amount of data. One of the leaders of the Google Brain project said, ‘The analogy to Deep Learning is that the rocket engine is the Deep Learning model and the fuel is the huge amounts of data we can feed to these algorithms.’ So basically, the key point is that Deep Learning algorithms are designed in such a way that they try to grasp high-level data, layer by layer.

Neural Networks and Deep Learning go hand-in-hand. So, to answer the question ‘what is Deep Learning?’- It is the implementation of intelligent algorithms using artificial neural networks.

Biological Neural Network: Our brain contains a large number of neurons. Neurons are nerve cells and are the basic building block of the central nervous system. These are specialized cells designed to trigger or energize other cells in the body to communicate. Neurons are excitable, which means that they function using electrical stimulations. Neurons are interconnected at points called synapses.

When a nerve impulse reaches the synapse at the end of a neuron, it cannot pass directly to the next one. Instead, synapse helps in triggering the neuron to release a chemical neurotransmitter. The neurotransmitter drifts across the gap between the two neurons. On reaching the other side, it fits into a tailor-made receptor on the surface of the target neuron, like a key in a lock. This docking process converts the chemical signal back into an electrical nerve impulse.

How does BNN work?

The human brain is composed of billions of neurons. They are further connected by axons to other cells for communication. There are dendrites, which accept the data from the outside world. The input is accepted by dendrites and they carry an electrical impulse to the nucleus of the neuron which is also called soma. Then, this impulse is passed on to the axon after further processing. Axon helps carry the impulse from the nucleus of a neuron to the synapse of it.

Moving ahead in this Deep Learning tutorial, let’s look at the layers in Artificial Neural Network.

Input Layer: The input node provides data from external sources to the network. It does not perform any computation. It simply passes the input data to the hidden layer.

Hidden Layer or Deep Neural Network: The collection of hidden artificial neurons makes the hidden layer. The computation and all the processing is done in the hidden layer, and it passes the output to the output layer. It constitutes multiple layers in it.

Output Layer: Output Layer is used for computation and delivering information from the network to the outside world.

Now, to move ahead with ANN in Deep Learning, you must know more about perceptron.

Perceptron is a Machine Learning algorithm used in Deep Learning that gives neurons the learning experience to give classified outputs. It uses binary classifiers for classified outputs which is a function that can decide whether an input belongs to some specific class. In other words, we can say that it is an artificial neuron.

In ANN, the nodes or perceptron mimic a biological neuron. ANN has a densely interconnected set of nodes. These nodes are constructed in such a way that it takes an input and produces the output. These nodes are connected by links, and they interact with each other with the help of these links. Nodes take the input data, and after processing, they pass the result to the subsequent nodes.

The links are associated with weights, which is basically a real number. Now, these weights are initialized randomly, and hence there could be a large difference between the actual values and predicted values. So, there are greater chances of having errors.

Learn end-to-end AI concepts through the Artificial Intelligence Course in Hyderabad to take your career to a whole new level!

Activation Function: First of all, in ANN, the input is always linear, that is, it can be represented in the form of a straight line. The activation function applies the function on the input received by the layer and converts the input from linear to non-linear to get the output of that layer and then feeds it as an input to the next layer.

Why is the activation function needed for the conversion of the input from linear to non-linear?

In the real world, the data is not 2-dimensional. A 2-dimensional data is linear and can be plotted in an XY-plane. For example, let’s say if, X-axis represents speed and Y-axis represents distance travelled by car. But, there are a lot more factors to be considered about the car, which cannot be represented with a 2D plane.

In a nutshell, these are the steps involved in ANN:

In the coming years, Artificial Intelligence will have a great impact on us as it will occupy a space in each device, we use making them smart as human beings. This will happen with steady evolution and more advanced research in the field of Deep Learning.

Visit our Artificial Intelligence Community to get answers to all your queries!