Are you still thinking about the future of your career in Scala? Then what are you waiting for? Earn a Scala Certification, and grab a chance to get your dream job. This blog will give you a clear picture of how a certification will help you achieve that milestone.

Nowadays, Scala is considered to be an alternative for Java, mainly because of Java being more verbose. Although it is statically typed, you do get a dynamic feel to it. Scala is generally being used for:

Web development frameworks like Play and Scalatra, use Scala to reuse the libraries of Java which are available.

Apache Spark is an open-source cluster-computing framework designed for speed computation. Scala is one of the 4 programming languages which is supported by Apache Spark.

Parallel computing is a computation where different computer tasks can be performed at the same time. This can be achieved through Scala because of functional programming.

Scala is really good for concurrency because it mainly focuses on immutability which helps concurrent algorithms.

You can utilize a lot of third-party libraries for specific tasks. They can be added in the form of language constructs.

Scala is widely used by some of the biggest companies like Twitter, LinkedIn, Netflix, etc., for implementing their platforms. Here are some of the Job profiles and their respective average salaries(in rupees):

Since the discovery of Scala, it has witnessed a tremendous amount of growth in its demand, which is known to increase in the near future. Here’s some stats to support the aforementioned statement:

How does a Scala Certification really benefit you?

Having a certification will definitely give you an advantage when the hiring managers look at your resume. Competitions for jobs in IT can be rigorous, but having a certification will change all of that. Earning a Scala Certification shows that you are determined to enhance your skillset. When compared to Java, Python, etc.., number of people who are moving towards Scala are relatively less. This is again an advantage because you will have few people to compete with.

And enhancing your skillset will definitely act as a platform for moving up the corporate ladder.  Having a certification can definitely mean the difference between keeping your current job and having a chance to find a new one.

After getting certified you will have something in common with your peers and this can provide networking opportunities. Lastly, earning a certification will enable you to make more money than what you are earning now.

Who can take up this Scala Certification course?

There are no prerequisites for taking up this course. However, a basic knowledge of database, SQL and query language can help. Even the Freshers who have just been graduated can take up this Scala Certification Course.

Learn programming in Scala, go through our blog on Exception Handling in Scala

How is IntelliPaat’s Certification going to help you?

IntelliPaat provides flexible modes of training and learning as its courses are designed entirely for the corporate professionals.  As part of this online Scala Certification course, you will be working on real-time projects and assignments that have immense implications in the real-world industry scenarios, thus helping you fast track your career effortlessly. In addition to that, IntelliPaat has tied up with major tech com such as MuSigma, Ericsson, Wipro, Cognizant, Genpact, SONY, Hexaware, TCS and 80+ MNC’s all around the world.

At the end of this online Scala Certification course, there will be quizzes that perfectly reflect the type of questions asked in the respective certification exams and help you score better marks. 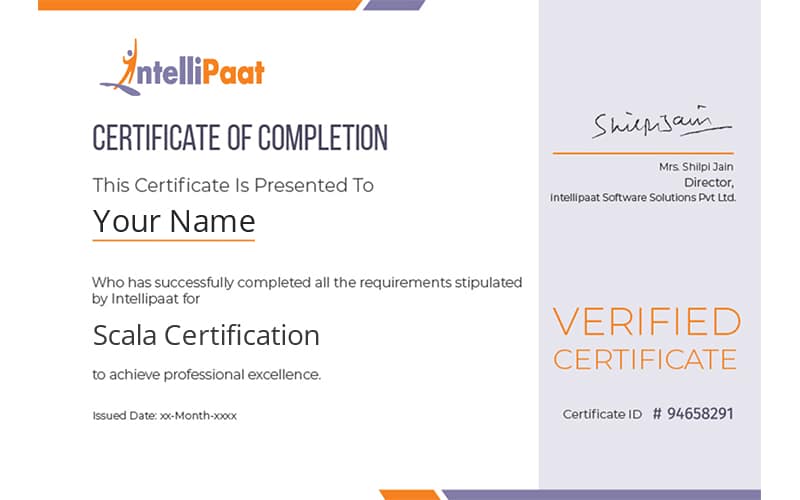 IntelliPaat also offers job assistance to all the learners who successfully complete the Scala Certification training and have a minimum of 60% in the quiz. And this will definitely be an added advantage when you are attending an interview.

What will you learn in this Scala Online Training course?

IntelliPaat’s Scala Certification course will help you understand the basics of how functional programming works. Scala is a pure Object Oriented with functional programming features as well. Scala follows a top-down approach where each of the bigger problems are broken down into smaller chunks and are then processed in parallel thus speeding up the process and improving the efficiency.

By the end of this course, you will have learnt