Here in this part of the Scala tutorial you will be introduced to the basic data types in Scala, this includes Boolean, int, long, short, float and more, how to declare a variable, various escape sequences and more.

What is a Basic Type in Scala

Basically, a Scala program describes the interaction between objects which interchange the messages. For example, things like numbers, character, and strings, etc. are objects that can interact with other objects or similar types of objects.

Wish to get certified in Scala! Learn Scala from top Scala experts and excel in your career with Intellipaat’s Scala certification!

Objects with no internal structure that is with no components are said to be of a basic type. 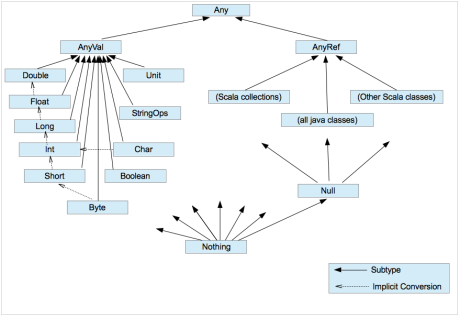 Learn more about the Significance Of Scala Training in this insightful blog now!

Enroll yourself in Online Scala Training and give a head-start to your career in Scala!

If the value does not agree with the type then a type of error has occurred.

An integer literal that is suffixed by an L or an l is assumed to be of type Long:

Refer to our blog on Regular Expressions in R.

Hexadecimal numbers can be written by adding prefix 0x or 0X:

Looking for a job change in Scala? Check out this informative blog on Jobs in Scala and excel in your career!

A character must be enclosed in single quotation marks:

You cannot assign to a character variable a single quotation mark because it gives an error. To solve this problem escape sequence is used which is started with /.

Prepare yourself for the industry by going through this Top Apache Spark and Scala Interview Questions and Answers!

A String is a sequence of Chars that is enclosed in double-quotes:

The literals true and false denote truth and untruth, respectively. These literals are the only values of type Boolean:

Still, have queries? Come to Intellipaat’s Big Data Community, clarify all your doubts, and excel in your career!

Unit Type contains only one value which is designated by two parentheses: