There are four types of cubes in Cognos TM1. They are as follows:

Get trained by industry experts with the Intellipaat Cognos TM1 training now.
Cubes are to TM1 what tables are to relational databases.

It is a TM1 cube which is sometimes termed as a soft cube where no data is loaded to or resides in, but only references data points in other cubes.
Being a fully rules-calculated cube, virtual cubes have no data stored in them. They just have rules pulling data from other cubes and possibly performing additional calculations on that data.

The steps to create a simple virtual cube are as follows:

To write the appropriate TM1 cube rules to associate with your virtual cube that will pull data from other cubes in TM1 into your virtual cube, you will have to perform the following steps:

As with all TM1 cubes, the rules that pull data from a source cube into a virtual cube must be associated with that virtual cube.

Adding rules to a cube will impact TM1’s ability to utilize its sparse consolidation algorithm. Fortunately, you can tell TM1 where to look for rules-derived values with feeders that you create.

Submitting a forecast to a virtual cube

Suppose you had a global TM1 application with multiple cubes defined—possibly a cube for each of a company’s sales regions—Northern, Western, Southern, and Eastern.
Let us say that each of the global region cubes are made up of the following dimensions: 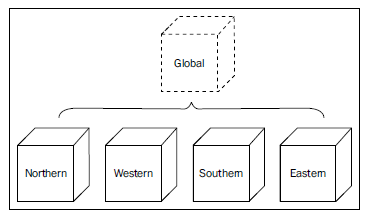 To do this you would create a rule in the virtual cube:

Additionally, even when cube dimensionality matches, specific elements may require translation between source and destination cubes.

Cognos TM1 rules can be written with conditional evaluation (you can use the IF function to force TM1 to evaluate a rule differently depending on a logic test).
Read these Top Trending Cognos TM1 Interview Q’s that helps you grab high-paying jobs!

Sometimes, it might be more realistic to wait until data is in a complete or approved state before making that data available in the consolidation cube, yet it is not desirable to have to intervene for sending or copying the data. One way to accomplish this might be to use conditional logic to modify your rule slightly: 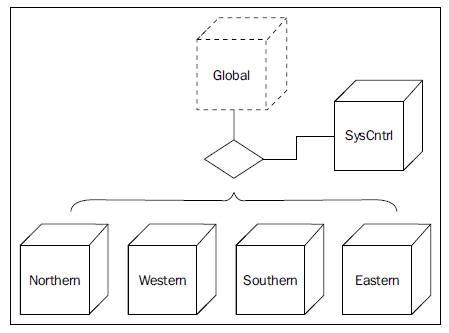 Consolidating data with a virtual cube

Another example of using a virtual cube is entity consolidation. For example, suppose a corporation consists of several legal entities that must report their financials to the parent. The parent, as well as each legal entity (LE), has its own Profit and Loss (P&L) cube in TM1.
So, for example, in the parent P&L cube we have: 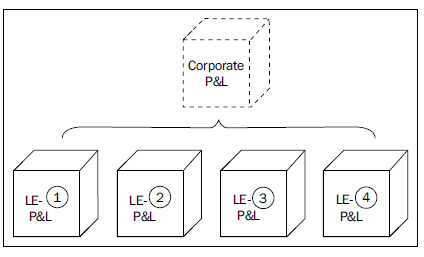 Another area where you can benefit from virtual cubes is with reporting. Some Cognos TM1 cubes may be very complicated, large, or have intensive rule calculations. Defining several specific reporting virtual cubes—based upon unique views of the larger cube or cubes—can be a solution: 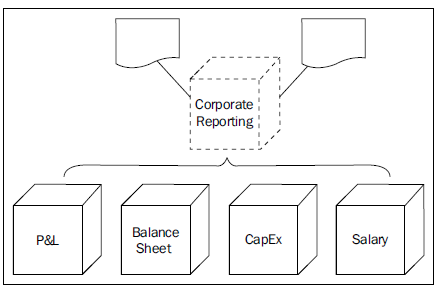 Other advantages of virtual cubes

The use of virtual cubes in your solution may also simplify the development of some TM1 active reports and web sheets by centralizing information into a single location. In fact, some active reports may not be possible without the use of a virtual cube.

Before choosing to implement virtual cubes as part of your reporting solution, all of the other options provided by Cognos TM1 should be explored and considered.

Finally, another type of TM1 cube is the cube referred to as a lookup or conversion cube. This is a sort of utility cube. Lookup cubes are cubes that you can set up and use to support other cubes and processes within a TM1 application. These cubes are most often set up to be read-only by design or even made non-visible to TM1 users and may contain calculations, controls, or reference data that are then used in your TM1 processing or pulled into other cubes using TM1 rules.

Whenever there is a need to perform a translation or conversion of information, you have to decide whether it is best to use an element attribute or a lookup cube.
Typically, if it is a single point translation (which involves only one dimension), you would have to use an attribute. If the translation involves multiple points, then you would use a lookup cube.
One advantage of using a lookup cube of this kind is that additional measures can be added in the future, which you would need to translate the source system account code to additional values, and no changes to the TI process would be required. 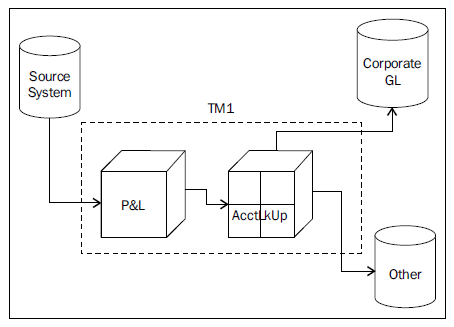 For performance reasons, lookup cubes can also be used to load data into a TM1 application without locking the cubes that your users see and use. Another cube (or cubes) will then use TM1 rules to reference the data in the lookup cube and would then be used by users for reporting or other updating.

Finally, a reporting cube may be defined at a certain level of aggregation. 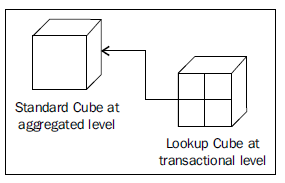 Cognos TM1 provides numerous types of pre-defined data spreading functions. These functions are useful for quickly distributing data to selected cells in a Cognos TM1 cube.
From the TM1 Cube Viewer, In-Spreadsheet Browser, and in slice worksheets you can right-click on a cell and TM1 will offer a menu that includes Data Spread where you can then click to select the desired data spreading method. 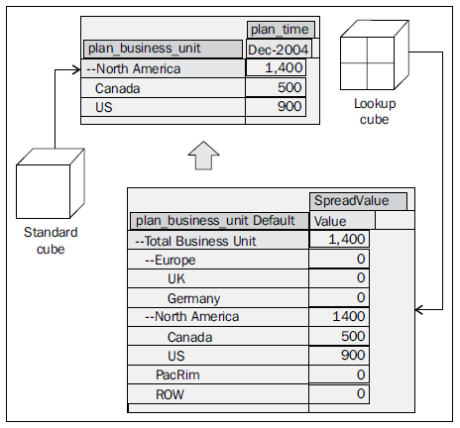