This part of the iOS tutorial will teach you about the iOS architecture, its layers, details of various layers, video framework, cocoa touch layer, multitasking support and more.

What is the architecture of iOS

Architecture of IOS is a layered architecture. At the uppermost level iOS works as an intermediary between the underlying hardware and the apps you make. Apps do not communicate to the underlying hardware directly.
Apps talk with the hardware through a collection of well defined system interfaces. These interfaces make it simple to write apps that work constantly on devices having various hardware abilities.
Lower layers gives the basic services which all application relies on and higher level layer gives sophisticated graphics and interface related services.
Apple provides most of its system interfaces in special packages called frameworks. A framework is a directory that holds a dynamic shared library that is .a files, related resources like as header files, images, and helper apps required to support that library. Every layer have a set of Framework which the developer use to construct the applications. 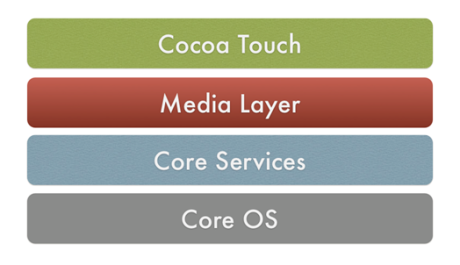 1. Core OS Layer:
The Core OS layer holds the low level features that most other technologies are built upon.

64-Bit support from IOS7 supports the 64 bit app development and enables the application to run faster.

2. Core Services Layer
Some of the Important Frameworks available in the core services layers are detailed: