In this Splunk tutorial you will learn Splunk fundamentals, so you can clear the Splunk certification. Through this tutorial you will get an idea of Splunk search, analytics, data enriching, monitoring, alerting, transformation commands, report and dashboard creation, creating lookups and more. Learn Splunk from Intellipaat Splunk course and excel in your career.

In this tutorial on Splunk, you will learn the following topics :

First, let us compare Splunk with ELK (Elastic, Logstash, Kibana) stack which also does a similar kind of job.

Splunk is used for extracting value out of machine-generated data. It can be thought of as a data mining tool for big data applications. Splunk can effectively handle big data with no decrease in performance. The best part of Splunk is that it does not need any database to store its data as it extensively makes use of its indexes to store the data.

Splunk is an absolutely fast engine and provides lightning-fast results. You can troubleshoot any issue by resolving it with instant results and doing an effective root cause analysis. Splunk can be used as a monitoring, reporting, analyzing, security information, and event management tool among other things. Splunk takes valuable machine-generated data and converts it into powerful operational intelligence by delivering insights through reports, charts, and alerts.

The Splunk Architecture comprises three main components. These components are as follows: 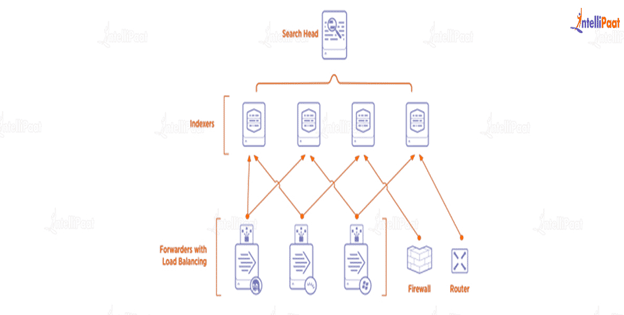 The Splunk Indexer is used for indexing and storing the data that is received from the Splunk Forwarder. It basically transforms data into events, stores and adds them to an index, which in turn enhances searchability. The data received from the Splunk Forwarder is first parsed so as to remove any unwanted data and then the indexing is done. In this entire process, the Splunk Indexer creates the following files and later bifurcates them into various directories called buckets:

It is basically a graphical user interface where the user can perform various operations as per his/her requirements. In this stage, the users can easily interact with Splunk and perform search and query operations on Splunk data. The users can feed in the search keywords and get the result as per their requirement.

The following diagram shows how the above components work together in the Splunk Architecture:

What is Splunk used for?

Splunk is a software platform used for performing monitoring, searching, analyzing and visualizing real-time machine-generated data. Its usage in indexing, correlating and capturing real-time data is very important and highly recognized. Also, Splunk is used in producing and creating graphs, dashboards, alerts and interactive visualizations.Using Splunk, organizations can easily access data and arrive at solutions to complex business problems too.

Here in this section of the Splunk tutorial, we will discuss some of the top features of Splunk.

Know how Splunk Integrated with Hadoop is the best combination for extracting quick insights in this Splunk Analytics for Hadoop blog.

We will discuss some of the applications of Splunk to give you a brief idea about the vast possibilities of Splunk.

Splunk Dashboards contain data visualization displays such as tables, charts, lists, maps etc. Each of these panels provide the visualization results using a base. You can build and edit dashboards using the Splunk Web dashboard editor, which is the user interface in Splunk Light. The created dashboards can also be edited using Simple XML source code.

The following steps can be used to build the dashboard :

Why should you learn Splunk?

In this section of the Splunk tutorial, you will find out why you need to learn Splunk. As we discussed before, Splunk is the Google for machine data, and going forward this machine data will be a major chunk of the big data that is being generated at breakneck speeds. So if you learn Splunk then you have a very bright future thanks to the increased deployment of Splunk in mission-critical applications cutting across industry verticals. Today, regardless of the industry vertical, It is being implemented for indexing data, facilitating Splunk search and investigation, mapping knowledge to search, scheduling alerts, and creating extensive reports and visualizations to aid business growth.

Interested in learning Splunk? Enroll in our Splunk Training now!

This Splunk tutorial is meant as the first step for anybody who wants to learn Splunk and excel in their career. Software developers, system administrators, database experts, search analysts can benefit from this Splunk tutorial.

There are no prerequisites for learning from this Splunk tutorial. If you have a knowledge of Data Analytics concepts, then it is good. In this, you will learn the basics of Splunk, and in the next tutorial, you will learn Introduction to Splunk

5 thoughts on “Splunk Tutorial For Beginners”

Find Splunk Training in Other Regions