What is Apache Pig?

A high-level platform for creating programs that run on Hadoop, Apache Pig can execute its Hadoop jobs in MapReduce, Apache Tez, or Apache Spark. Pig Latin is the language used for this platform, which can be extended using user-defined functions (UDFs) that the users can write in Java, Python, JavaScript, Ruby, or Groovy.

In this age, everything is digital. Since everything is digital in companies and industries, all their data is digital too. Any large source of data can face problems when processing data. Apache Pig is a platform for observing or inspecting large sets of data. It allows developers to create query execution routines to analyze large, distributed datasets. This saves them from doing low-level work in MapReduce. The language upon which this platform operates is Pig Latin.

Apache Pig is a platform utilized to analyze large datasets consisting of high level language for expressing data analysis programs along with the infrastructure for assessing these programs. Pig programs can be highly parallelized due to the virtue of which they can handle large data sets.

Pig was initially developed by Yahoo! for its data scientists who were using Hadoop. It was incepted to focus mainly on analysis of large datasets rather than on writing mapper and reduce functions. This allowed users to focus on what they want to do rather than bothering with how its done. On top of this with Pig language you have the facility to write commands in other languages like Java, Python etc. Big applications that can be built on Pig Latin can be custom built for different companies to serve different tasks related to data management. Pig systemizes all the branches of data and relates it in a manner that when the time comes, filtering and searching data is checked efficiently and quickly.

Get a good grounding in Apache Pig through this video:

Codes or scripts written on Pig Latin can be transformed into MapReduce applications which can deal with parallel data and provide multithreading programs that increase the amount of data processed at a time and with that it also provides redundancy, meaning that the vital parts of the function are duplicated so the system doesn’t depend on just one path to reach its goal. Using the User Defined Function (USD), Pig can intake data from all sorts of sources including data files, streams or any other source and add it to its system for future use.

Differences Between MapReduce and Pig

As said earlier Pig was built on top of MapReduce. But Pig is way better than MapReduce. Here are some interesting facts regarding Pig tool.

Pig Latin is the language used to analyze data in Hadoop using Pig. Pig comes with a rich set of data types and operators to do different data operations. If the programmers hope to run a task in Pig then they need to use this language to write a Pig script. They then can use it to execute through various execution mechanisms like UDFs, Embedded, Grunt Shell. To produce the intended output these scripts will go through a series of transformations applied by Pig to give the desired output.

Pig internally converts these scripts into a series of MapReduce jobs and therefore the programmers work is made much easy. This is the architecture of Pig as shown below –

Parser – It handles the Pig scripts. It also performs the checking of the script syntax, type checking and other checks. The parser output will be a DAG (directed acyclic graph) and this represents the Pig Latin statements and logical operators. Script logical operators are taken as nodes and the dataflows that can be seen are just edges.

Compiler – It compiles the optimized logical plan into a series of MapReduce jobs.

Execution engine – The sorted MapReduce jobs are submitted to Hadoop. These jobs then run on Hadoop to produce the intended results.

There are two execution modes of Pig. These modes depend on where the Pig script is to run and also on the location of where the data is residing. Data can be stored on a single machine or in various clusters.

Pig local mode – The Pig implements on a single JVM and subsequently accesses the file system. This mode is ideal for dealing with smaller datasets. The user provides –x local to get into the Pig local mode of execution. To load data Pig always looks for the local file system path.

Pig MapReduce mode – The user gets proper Hadoop cluster setup and installations on this mode. Here the Pig uses the –x MapReduce option to get into the mode. This is the default mode where the Pig installs and just entering ‘Pig’ into the shell also works. The queries which the Pig translates into MapReduce jobs are run on top of Hadoop cluster. LOAD, STORE statements actually read from HDFS filesystem, show output and also to process data.

In this section of Pig tutorial we will discuss about the nuances in the Pig language’s schema. Pig assigns name to the field and declares field data type. To define schema in Pig Latin is optional but it is a good practice to use them rather than not. If this practice is followed then error checking becomes efficient resulting in smooth execution of program. Schema can be declared as both simple and complex data types. We expound more aspects of Pig schema through the following points on the Pig tutorial:

Let’s examine the Pig tool to see what features it really constitutes.

Go through our blog on Pig Functions for a clear understanding of build-in functions.

Differences between Pig and Hive

These two tools are not similar even though from a non technical perspective they might seem as so. Let’s see how they vary in 7 different ways.

This model is fully nested and map and tuple non-complex data types are allowed in this language. This kind of Pig programming is used to handle very large datasets.

Atom is any single value in this language regardless of the data and type. It is stored as string and used as number as well as string. Pig atomic values are long, int, float, double, bytearray, chararray. A field is a piece of data or a simple atomic value. Ex : ‘26’ or ‘avi’

Tuple is formed by the ordered set of fields where the fields can be of any type. It is similar to a row in RDBMS table.

An unordered set of tuples is known as bag. Said in another way a bag is a collection of non-unique tuples. There is flexible schema as every tuple can have any number of fields. A bag is represented by ‘{}’. It mirrors with the RDBMS in its features except that is not necessary that every tuple contain the same number of fields. It is also not required that those fields in the same position have the same type.

A bag can be in a field in a relation in which case it is known as an inner bag.

A set of key value pairs is known as a map. The key should be of type chararray and unique. The value can be any type and map is represented by ‘[]’.

Relation A bag of tuples is known as a relation and these are unordered.

There are two types of commands which Pig tool gives out to developers namely Shell and Utility commands.

Fs – This command is used to invoke Fs shell command in a Pig script or grunt shell.

Sh – This command is used to invoke any sh shell command in a Pig script or Grunt shell.

Clear – The cursor is positioned at the top of the screen and the Pig grunt shell screen is cleared. Similar to clrscr() in C language.

Help – Gives out a list of Pig commands similar to UNIX’s help command.

History – Gives out the list of statements so far.

Kill – This command kills a job.

Quit – The control comes out of Pig grunt shell.

We have shown how the fs command works here in the Pig script:

To explore more about Pig commands, check out our Pig Cheat Sheet.

We know Pig processes data very efficiently. But let’s see through which mechanisms data traverses between Pig and HDFS/local filesystem.

Through LOAD operator data from the HDFS/local file system can be loaded into Pig.

The The_relation is stored into the required directory path through the process defined by the function.

1. Go to Apache Pig website. Under News section,click on the link release page as shown below.

2. On doing this you will be redirected to the Apache Pig Releases On this page, under the Downloadsection, you will see download a release now link. Click it. 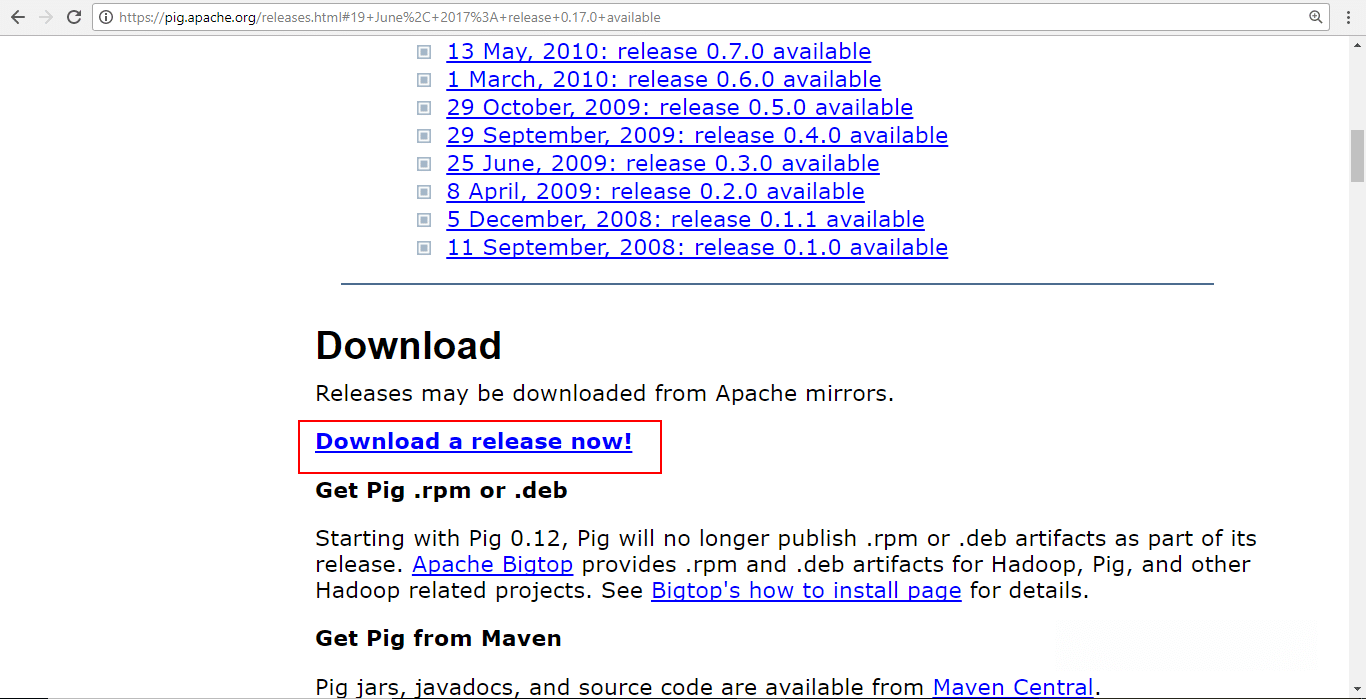 3. Go to the link shown below. 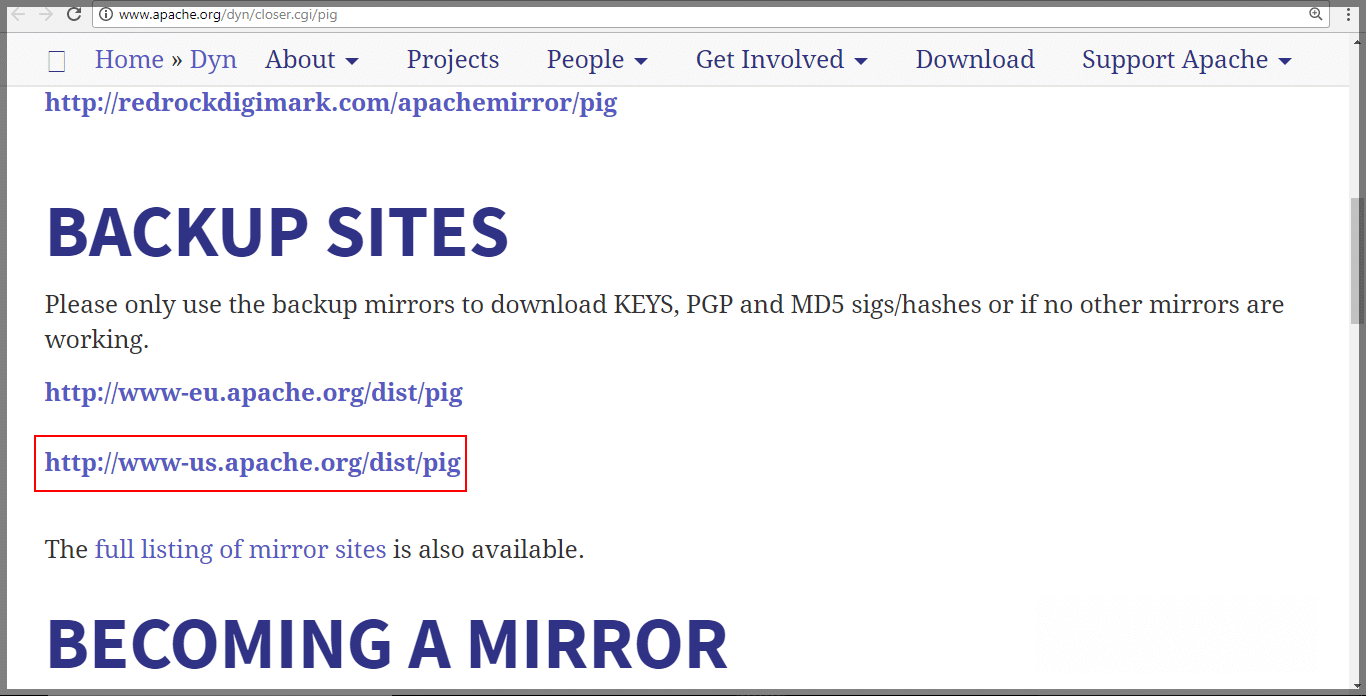 4. The link will take you to the Pig Releases This page contains various versions of Apache Pig where you have toopt the latest version among them which currently is pig-.0.17.0.

Use cases of Pig

There are many organizations and even various applications today that use Pig technology. These include big companies like LinkedIn, Mendeley etc who use Pig for finding or matching people from different places on their website. Other than that people can use this technology to match places and find jobs. Search engines or question answer engines also use Apache Pig technology and offer Hadoop tutorial to their employees so that in the future they can utilize this gained knowledge in the maintenance of the company servers.

Other big names in the social media world such as Yahoo and Twitter also use Pig technology. Twitter uses their applications for log in and mine tweeting, while Yahoo uses it for matching and finding relevant data. Stanford University has dedicated a good portion of its research department on Pig technology and Hadoop training as they understand the power, need and use of this technology as a tool in the business world and the social media circle.

It is also used in the de-identification of personal health information. Often those who volunteer for medical tests want privacy and therefore those data has to be de indentified meaning the data has to be deleted. The challenges here are that huge amount of data flows into the system regularly. Also there are multiple data sources where we need to aggregate the data from. Processing this data and de identifying it had its own problems.

Pig is the technology that builds a bridge between Hadoop, Hive and other data management technologies which can be further used to eradicate problems related to management of big or any size of data. MapReduce has gone out of style because it is way easier to write code in Pig and also Apache Spark is partly responsible. On top of it, it is more effective also as we have seen that 10 lines of MapReduce code is equivalent to a single line of Pig code.

Get a good grounding on the concepts of Apache Pig through Intellipaat’s Hadoop training!

Big Data Engineer Salary in India: How much does o...