Have you ever wondered, how your brain recognizes numbers? No matter how the digits or numbers looks like, brain will relate that to the best possible pattern and concludes the result. This is where the thinking came out to make a something which can recognize similar number patterns, and that is where Neural Networks starts.
Let’s discuss a situation
The digits in the above picture had been written in extremely low resolution of 28px by 28px even though how effortlessly your brain identifies that as 6. Similarly, there can be very different shapes and pattern for a same number but somehow your visual cortex resolves those as representing the same idea while recognizing the other pictures as their own distinct idea. 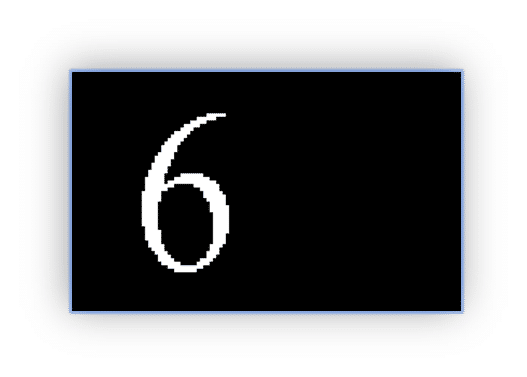 In this article, you will learn about the basics of Neural Networks/Artificial Neural Networks and their implementation.
Here we have the list of topics if you want to jump right into a specific one:

Here you will also learn about the Neural Network basics and its key features.

What is an Artificial Neural Network? 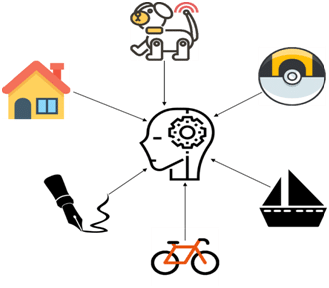 Interested to know more about AI? Enroll for this Artificial Intelligence Course in Chennai Now!

In the above topic, you learned about the Neural Network. Now there is a question which you might be wondering that what motivates towards Neural Network?
Motivation behind neural network is human brain. Human brain is called as the best processor even though it works slower than other computers. Many researchers thought to make a machine that would work in the prospective of the human brain.
Human brain contains billion of neurons which are connected to many other neurons to form a network so that if it sees any image, it recognizes the image and processes the output. 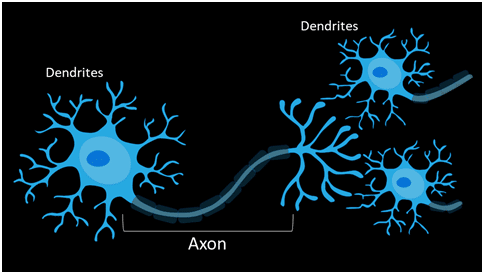 In the similar manner, it was thought to make artificial interconnected neurons like biological neurons making up an Artificial Neural Network(ANN). Each biological neuron is capable of taking a number of inputs and produce output.
Neurons in human brain are capable of making very complex decisions, so this means they run many parallel processes for a particular task. One motivation for ANN is that to work for a particular task identification through many parallel processes.

Artificial Neuron are also called as perceptrons. This consist of the following basic terms:

How perceptron works?
A. All the inputs X1, X2, X3,…., Xn multiplies with their respective weights.

B. All the multiplied values are added. 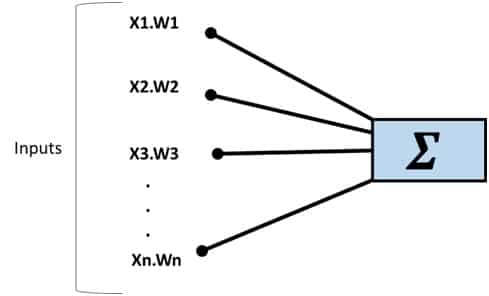 C.  Sum of the values are applied to the activation function. 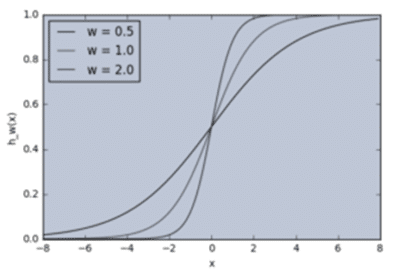 Here, by changing weights, you can very input and outputs. Different weights changes the output slope of the activation function. This can be useful to model Input-Output relationships.
What if you only want output to be changed when X>1? Here, the role of bias starts.
Let’s alter the above example with bias as input. 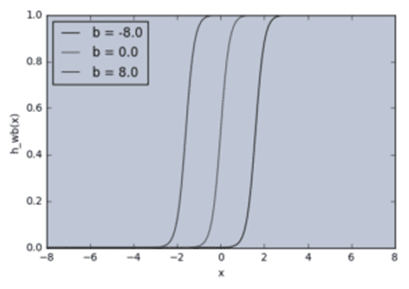 As you can see, by varying the bias b, you can change when the node activates. Without a bias, you cannot vary the output. 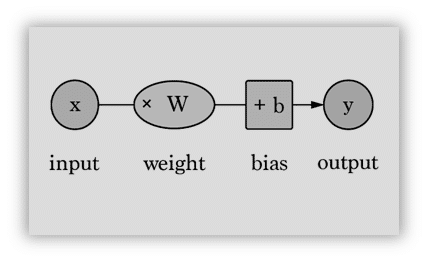 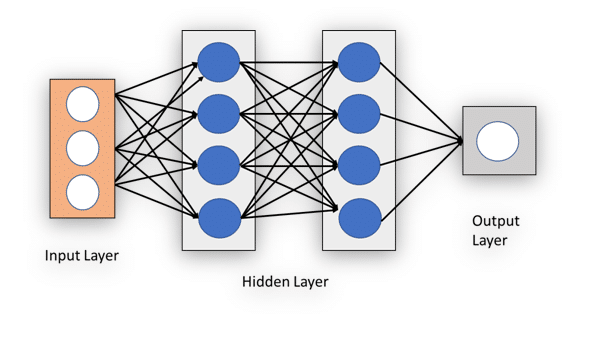 Input Layer
Input layer contains inputs and weights. Example: X1, W1, etc.
Hidden Layer
In a neural network, there can be more than one hidden layer. Hidden layer contains the summation and activation function.
Output Layer
Output layer consists the set of results generated by the previous layer. It also contains the desired value, i.e. values that are already present in the output layer to check with the values generated by the previous layer. It may be also used to improve the end results.
Let’s understand with an example.
Suppose you want to go to a food shop. Based on the three factors you will decide whether to go out or not, i.e.

Based on the conditions, you choose weight on each condition like W1=6 for money as money is the first important thing you must have, W2=2 for vehicle and W3=2 for weather and say you have set threshold to 5.
In this way, perceptron makes decision making model by calculating X1W1, X2W2, and X3W3 and comparing these values to the desired output.

Activation functions are used for non-linear complex functional mappings between the inputs and required variable. They introduce non-linear properties to our Network.
They convert an input of an artificial neuron to output. That output signal now is used as input in the next layer. 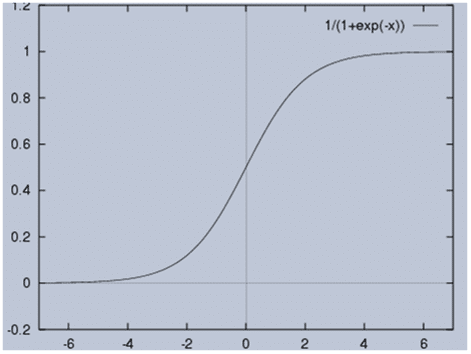 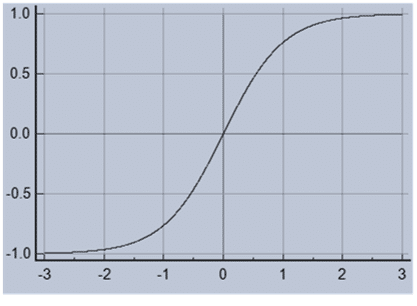 It avoids as well as rectifies vanishing gradient problem. It has six times better convergence as compared to tanh function. 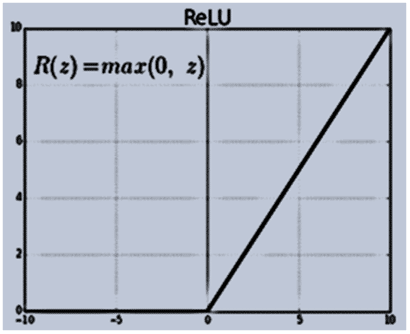 It should be used within hidden layers of the neural network.

Gradient is the slope of the error curve. 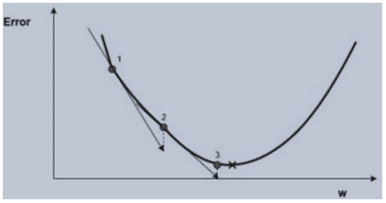 The idea of introducing gradient to reduce the or minimize the error between the desired output and the input. To predict the output based on the every input, weight must be varied to minimize the error.
Problem is how to vary weight seeing the output error. This can be solved by gradient descent.
In the above graph, blue plot shows the error, red dot shows the ‘w’ value to minimize the error and the black cross or line show the gradient.
At point 1, random ‘w’ value is selected with respect to error and gradient is checked.
If gradient is positive with respect to the increase in w, then step towards will increase the error and if it is negative with respect to increase in ‘w’, then step towards will decrease the error. In this way, gradient shows the direction of the error curve.
The process of minimizing error will continue till the output value reaches close to the desired output. This is a type of Backpropagation.
Wnew=Wold–α ∗∇error
Wnew= new ‘w’ position
Wold= current or old ‘w’ position
∇error= gradient of error at Wold.
α= how quickly converges to minimum error
Example:
Minimum value of the equation f(x)=x4–3x3+2
Minimum value of x is 2.25 by mathematical calculation, so program must give the gradient for that. 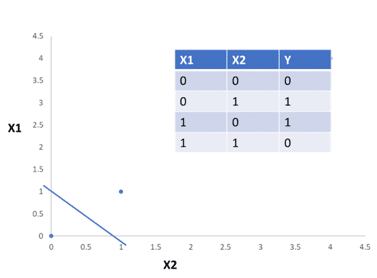 In the above picture, you can see that it is impossible to draw a straight line in case of XOR. So, linear classifier fails in case of Single Layer Perceptron.

However, multilayer perceptron uses the backpropagation algorithm that can successfully classify the XOR data. 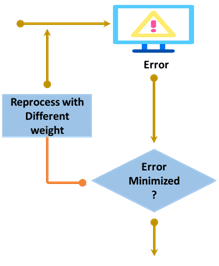 This is how backpropagation works. It uses gradient descent algorithm.
Let’s see a program that explains the multi-layer propagation

Run the above code and you will get the main output as 0.862 which is close to the desired output 1. Small error is acceptable.

Images having high pixels cannot be checked under MLP or regular neural network. In CIFAR-10, images are of the size 32*32*3., i.e. 3072 weights. But for image with size 200*200*3, i.e. 120,000 weights, number of neurons required will be more. So, fully connectivity is not so useful in this situation.
In CNN, the input consists of images and the layers having neurons in three-dimensional structure, i.e. width, height, depth.
Example:
In CIFAR-10, the input volume has dimensions, i.e. width, height, depth 32*32*3.

In convolutional layer, neurons receive input from only a restricted subarea of the previous layer, i.e. neurons will be only connected to a small region to the layer before it and not in the fully connecting manners.
So, the output layer for CIFAR-10 would have dimensions 1*1*10 because by the end of the CNN the full image will get converted into a small vector along its depth.
A simple CNN for CIFAR-10 has the following sections:

In this way, CNN transforms the image layer by layer to the class score.
It is not important that all the layers contain the same parameters.

You have learned how to represent a single word. But how could you represent phrases or sentences?
Also, can you model relation between words and multi-word expressions?
Example: “consider” = “take into account” or can you extract representations of full sentences that preserve some of its semantic meaning?
Example: “words representation learned from Intellipaat” = “Intellipaat trained you on text data sets representations”
To solve this problem recursive neural network was introduced.
It uses binary tree and is trained to identify related phrases or sentences.
Example: A wise person suddenly enters the Intellipaat 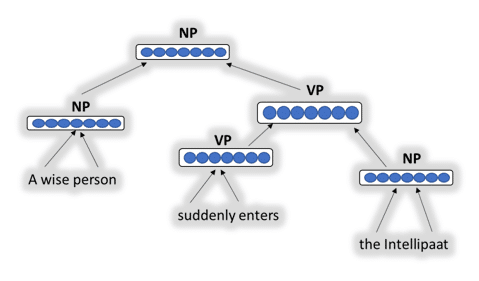 The idea of recursive neural network is to recursively merge pairs of a representation of smaller segments to get representations uncover bigger segments.
The tree structure works on the two following rules: 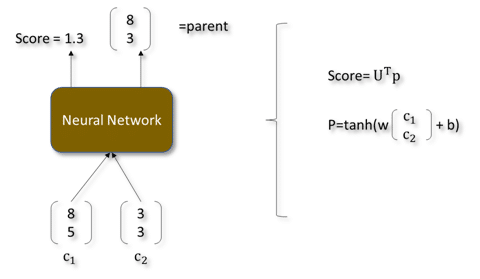 In place of  and , there can be two words from a sentence as seen in the above picture. By checking the scores of each pair it produces the output. 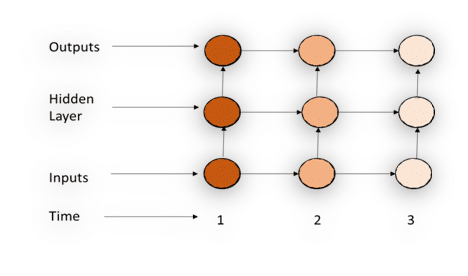 Let’s say you have a normal neural network to which input is Intellipaat. It processes the word character by character. By the time it reaches to the character ‘e’, it has already forgotten about ‘I’, ‘n’, and ‘t’. So, it is impossible for normal neural network to predict next letter.
Recurrent NN remembers that because it has its own internal memory. It produces output, copies that output and loops it back into the network.
Let’s take a practical example to understand Recurrent NN:
Let’s say you are the perfect person for Intellipaat, but why? Because every week, you attain regular courses from Intellipaat to develop your skills. Your schedules are:
Monday = Java, Tuesday = Data Science, Wednesday = Hadoop, Thursday= AWS 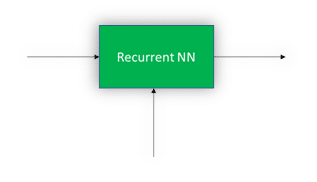 If you want a NN to tell you about your next day course then, you have to enter today’s course. So, if you enter input Java then, it should output Data Science. When input is Data Science, then output should be Hadoop, and so on.

From the above example, output is recursively is going to the input to judge the next output.

What will happen if there are 100 or more than 100 cases in Recurrent NN? What if there are 150 days in a week and you want NN to tell you next day’s course information? 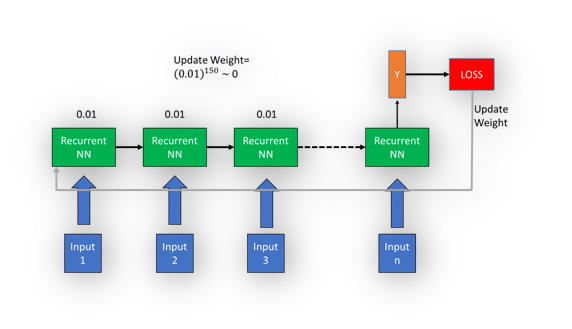 In the above picture, you have 150 states. Each state has a gradient of 0.01. To update the gradient in the first state it would be   which is almost equals to zero. So, the update in the weight will become zero. In this case, NN will not learn anything to improve and will produce the same error. This is also called as vanishing gradient problem. This is where LSTM(Long-short term Memory) came into action.
What is LSTM?
Long Short-Term Memory (LSTM) networks are the better version of Recurrent NN that extends Recurrent NN’s memory. LSTM’s memory is like computer’s memory because it can read, write and delete data.
In LSTN there are three gates: input gate, forget gate and output gate. Input gate decides whether to let the input pass or not, forget gate deletes the garbage information and output gate outputs the data at the given time step.
By providing cell gates mechanism to Recurrent NN, LTSM becomes more efficient than Recurrent NN.
Applications of Neural Network
As you are now aware of Neural Network, it’s working and types then, let’s know where it can be implemented.

There are many more applications of Neural Network which are helpful in our day-to-day life.

This brings us to the end of Neural Network tutorial. In this tutorial, we learned in detail about the overview of Neural Network.
We also covered almost all the main topics of Neural Network, its programming part, types, motivation, etc. If you want to learn more, I would suggest you to try our Intellipaat “Neural Network” course that covers in-depth knowledge of most of the important topics like how to train a model, how to program for that and different approaches towards Neural Network.
Join Intellipaat Artificial Intelligence Course today and let your career boom towards the domain of Big Data and higher opportunities.