Once the forward propagation is done and the neural network gives out a result, how do you know if the result predicted is accurate enough. This is where the back propagation algorithm is used to go back and update the weights, so that the actual values and predicted values are close enough.

Back Propagation Algorithm in Neural Network

In an artificial neural network, the values of weights and biases are randomly initialized. Due to random initialization, the neural network probably has errors in giving the correct output. We need to reduce error values as much as possible. So, for reducing these error values, we need a mechanism that can compare the desired output of the neural network with the network’s output that consists of errors and adjusts its weights and biases such that it gets closer to the desired output after each iteration. For this, we train the network such that it back propagates and updates the weights and biases. This is the concept of the back propagation algorithm.

Watch this video on Tensorflow Tutorial for Beginners:

Below are the steps that an artificial neural network follows to gain maximum accuracy and minimize error values:

We will look into all these steps, but mainly we will focus on back propagation algorithm.

Back propagation in Neural Networks

The principle behind the back propagation algorithm is to reduce the error values in randomly allocated weights and biases such that it produces the correct output. The system is trained in the supervised learning method, where the error between the system’s output and a known expected output is presented to the system and used to modify its internal state. We need to update the weights such that we get the global loss minimum. This is how back propagation in neural networks works. 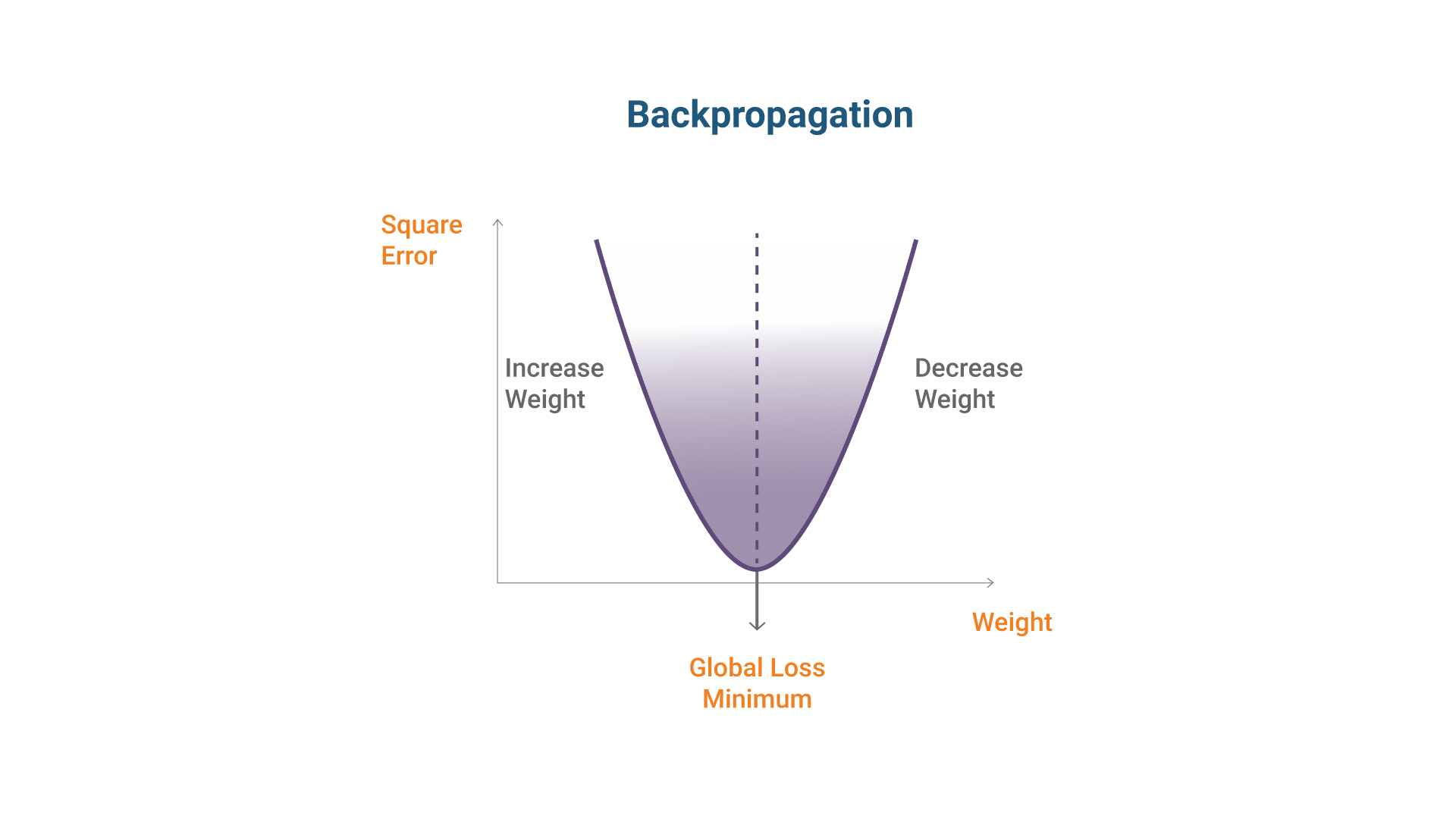 When the gradient is negative, an increase in weight decreases the error.

When the gradient is positive, the decrease in weight decreases the error.

Working of Back Propagation Algorithm

How does back propagation algorithm work?

Go through the Artificial Intelligence Course in Sydney to get clear understanding of Weak AI and Strong AI.

In order to have some numbers to work with, here are initial weights, biases, and training input and output.

The sigmoid function pumps the values for which it is used in the range, 0 to 1.

It is used for models where we have to predict the probability. Since the probability of any event lies between 0 and 1, the sigmoid function is the right choice.

Carrying out the same process for h2:

The output for o1:

Carrying out the same process for o2:

We can now calculate the error for each output neuron using the squared error function and sum them up to get the total error: E total = Ʃ1/2(target – output)2

By repeating this process for o2 (remembering that the target is 0.99), we get:

Then, the total error for the neural network is the sum of these errors:

Our goal with back propagation algorithm is to update each weight in the network so that the actual output is closer to the target output, thereby minimizing the error for each output neuron and the network as a whole.

Consider w5; we will calculate the rate of change of error w.r.t the change in the weight w5:

Since we are propagating backward, the first thing we need to do is to calculate the change in total errors w.r.t the outputs o1 and o2:

Now, we will propagate further backward and calculate the change in the output o1 w.r.t to its total net input:

How much does the total net input of o1 change w.r.t w5?

Putting all values together and calculating the updated weight value:

We can repeat this process to get the new weights w6, w7, and w8.

We perform the actual updates in the neural network after we have the new weights leading into the hidden layer neurons.

We’re going to use a similar process as we did for the output layer, but slightly different to account for the fact that the output of each hidden layer neuron contributes to the final output. Thus, we need to take Eo1 and Eo2 into consideration.

We can visualize it as below: 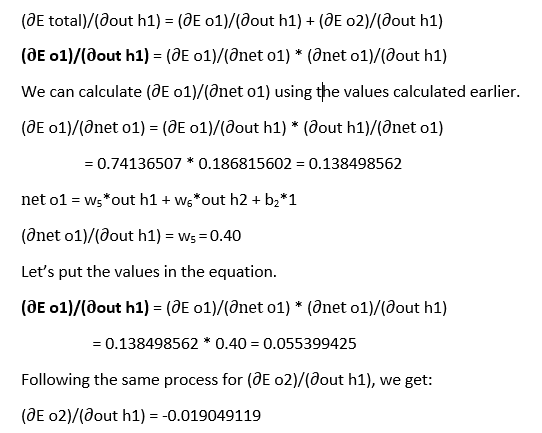 We will calculate the partial derivative of the total net input of h1 w.r.t w1 the same way as we did for the output neuron.

Let’s put it all together. 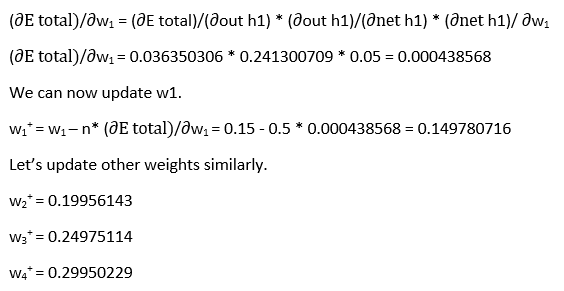 Now, in this back propagation algorithm blog, let’s go ahead and comprehensively understand “Gradient Descent” optimization.

Prepare yourself for the Artificial Intelligence Interview questions and answers Now!

‘−’ refers to the minimization part of the gradient descent. 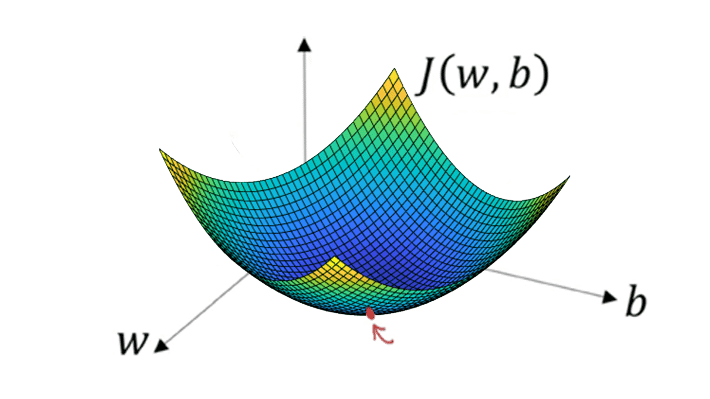 Moving ahead in this blog on “Back Propagation Algorithm”, we will look at the types of gradient descent.

Learn more about Artificial Intelligence from this AI Training in New York to get ahead in your career!

It is a widely used algorithm that makes faster and accurate results. The dataset, here, is clustered into small groups of ‘n’ training datasets. It is faster because it does not use the complete dataset. In every iteration, we use a batch of ‘n’ training datasets to compute the gradient of the cost function. It reduces the variance of the parameter updates, which can lead to more stable convergence. It can also make use of a highly optimized matrix that makes computing of the gradient very efficient.

Go through this AI Course in London to get a clear understanding of Artificial Intelligence!