In this part of the R tutorial, we are going to cover the basic syntax used in R, along with learning what variables are and their different types. Then, we will move on to different data types in R programming.

There are two ways to write code in RStudio:- first, in the command prompt and, second, in the R script file. We will go through both one by one.

A variable is a name given to a memory location, which is used to store values in a computer program. Variables in R programming can be used to store numbers (real and complex), words, matrices, and even tables. R is a dynamically programmed language which means that unlike other programming languages, we do not have to declare the data type of a variable before we can use it in our program.
For a variable to be valid, it should follow these rules

NA:– Not Available is used to represent missing values.
NULL:- It represents a missing or an undefined value.
NaN:– It is a short form for Not a Number(eg:- 0/0).
TRUE/FALSE: – These are used to represent Logical values.
Inf :– It denotes Infinity(eg:- 1/0).
If else, repeat, while, function, for, in, next, and break:– These are Used as looping statements, conditional statements, and functions.
…  :- It is used to pass argument settings from one function to another.
NA_integer_, NA_real_, NA_complex_, and  NA_ character _:- These represent missing values of other atomic types.
For example:

Check out the top R Programming Interview Questions to learn what is expected from R professionals!

The entities whose values are fixed are called constants.
There are two types of constants in R:

The fundamental or atomic data types in R Programming are as follows: 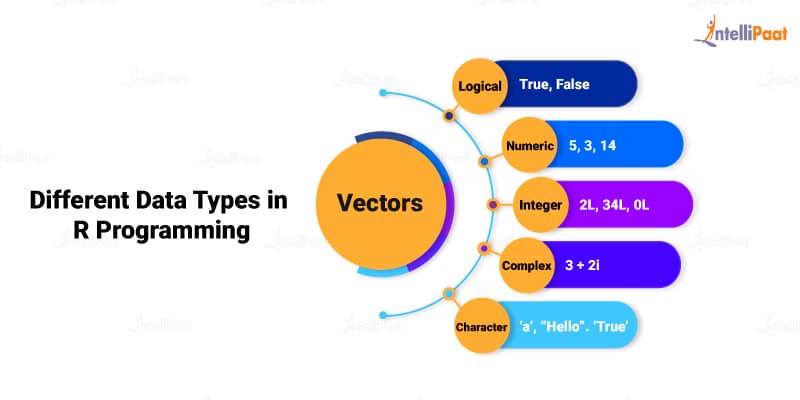 Elements of these R programming data types are often combined to form data structures in R.

Visit our R programming Community to get answers to all your queries!

And, the following statement is used to print the data type of the variable “x”:

To create an integer variable in R, we need to call the (as.Integer) function while assigning value to a variable.
For example:-

Another way of creating an integer variable is by using the L keyword as follows:

Are you interested in learning R Programming from experts? Enroll in our R training institute in Bangalore now!

The values containing the imaginary number ‘i’ (iota) are called complex values.
The following code gives an error when run:

To overcome this error, we coerce the value (−1) into a complex value and denote it as ‘i’.

This data type is used to represent strings.
For example:

We can also use the as.character() function to convert objects into character values.
For example:

A logical data type stores either of the two values: TRUE -/FALSE. A logical value is often generated when two values are compared.
For example:-

Three standard logical operations,i.e., AND(&), OR(|), and NOT(!) yield a variable of the logical data type.
For example:-

To learn more about R, go through our R programming Tutorial!.

In this tutorial, we covered the basic syntax of writing a program in R, along with learning what a variable is and how to define a variable we also discussed how to store data with different data types in r programming. Next, we are going to talk about R Programming Operators.