What is Artificial Neural Network?

Nature has proved to be the biggest motivation for humans to create elegant and simple solutions. One of the biggest challenge of past 5 decades is to make an intelligent machine. Since human beings are the most intelligent creatures on the earth, our brain becomes a natural anchor point for computer engineers and computer scientists as a potential solution to this problem. Human brain is made up of billions of neurons. Although it’s not completely clear how these neurons work. Based upon the knowledge we already have about human brain it’s clear that network of these neurons or natural neural network plays a central role in vision, decision making, listening, computation and all other human actions.

Categorization: It is the process in which the ideas and objects are recognized, understood and interpreted. What a category does is create a relationship between the objects and subjects of knowledge.

Association: The association rule is used for various applications like uncovering patterns, correlations, in a set of data in order to refine it and make it readily usable.

Generalization: Generalization is the process of deploying the model that is completely trained onto new sets of data that is previously not encountered but gathered from the same distribution that is used to create the model.

What is a Neuron? 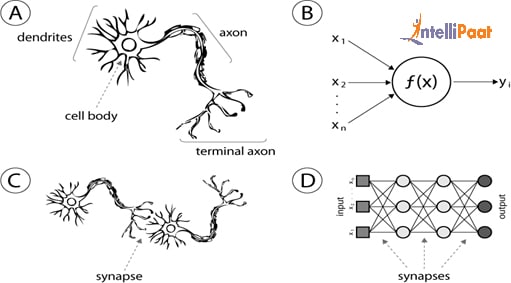 Neuron is a central component of natural neural network. Neuron takes the input gathered by human senses, process this information and sends executable reactions to muscles. Neuron has three fundamental components viz. dendrites, axon and cell body or soma. A dendrite acts as an input point for neuron and the axon is output structure of neuron. A neuron can have two states viz. either it fires or it doesn’t fire. When neuron fires, it exchanges information among each other in the form of electrical signals. Two neurons are connected with each other through axon and form a network. This network is called Natural Neural Network (NNN).

What is Artificial Neural Network (ANN)?

Artificial neural networks are computational systems vaguely inspired by design of natural neural networks (NNN). These systems are also called connectionist systems. Fundamental computational units are called nodes. These nodes represents neurons in natural neural networks. These nodes takes an input, perform computation on it and provides an output. Output of one node can be an input for another node. Nodes are connected with each other through edges. Each edge has a weight represented by a real number. Weight is used to guide the direction of execution process. Usually these nodes stay in layers. First layer of artificial neural network is called input layer. Input layer is responsible to take input. Input layer is directly connected with hidden layers. These hidden layers perform computations on input. If a neural network has more than one hidden layers, then it’s called Deep Neural Network. Every node carries a weight. It is a real number. If this value increases it is called strong neural connection. It act as a guiding factor in learning process for the Artificial Neural Network.