In this Django tutorial series, we will talk about the basic Django concepts, such as installation, creating projects and applications, models, views, templates, and URLs, and the advanced concepts such as testing and deployment. We will build a web application using Django and a REST API using Django REST Framework. Let us start with the fundamentals of Django.

Most of the web applications, apart from their core features, consist of common functionalities such as authentication, database connectivity, etc. Having predefined APIs or classes to solve specific web development problems makes Web Developers’ job a lot easier.
These predefined APIs and tools that can be used to simplify common web development operations are known as the web framework. One of the most popular Python web frameworks is Django.

In case you want to jump right into a particular topic, here’s a table of contents for this Django tutorial.

First of all, watch this video on ‘Django for Beginners’:

What is Django Web Framework?

Django is a web framework written in Python. A web framework is a software that supports the development of dynamic websites, applications, and services. It provides a set of tools and functionalities that solves many common problems associated with web development, such as security features, database access, sessions, template processing, URL routing, internationalization, localization, and much more.

Wish to crack Django job interviews? Intellipaat’s Top Django Interview Questions are meant only for you!

First of all, it is a Python web framework, which means that you can benefit from a wide range of open-source libraries out there. This popular web framework also offers a standalone web server for development and testing, caching, and middleware system. Moreover, it provides the ORM (object-relational mapper) library, the template engine, form processing, and an interface with Python’s unit testing tools.

Check if Python is installed in the system by using the following command:

If Python is not installed in your system, go through this tutorial on ‘How to Download and Install Python?’

The model or the model class is the source of information regarding the data. In other words, the model can be considered as the logical data structure behind the entire web application. Each model is associated with a table in the database.

The view or the view function takes up different web requests and returns respective responses. For instance, the request can be POST or GET type, and the response can be an HTML page, a 404 error, a redirect, or an image.

Template layer determines how a user sees the response Django returns. It basically controls the user interaction.
Let us talk about how these components communicate with each other to make the development in Django easy and rapid.

First, a user requests for a resource. Django considers the request as a URL and matches it with the existing URL paths in the urls.py file. This process of matching the user-requested URL to the one in urls.py is known as URL mapping. Once the URL matches, Django carries out the further process.

Once the URL is mapped, Django jumps to the views.py folder and calls a view. The triggered view looks for models and templates to interact with, and then it returns the response back to the user. Here, the model deals with the data associated with the user request. On the other hand, the template deals with the HTML and the static files, such as CSS files, JS files, images, etc., that are required to complete the view.

Alright, now that we know how the architecture works, let us move ahead with our Django tutorial and see how to use Django framework to build a web application.

In order to create a new Django project, run the following django-admin startproject command in the command prompt.

Now, go to the folder where the command prompt was being run from. There you can find a new project directory that looks like this. 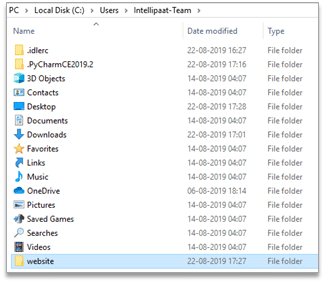 Inside that directory the following default python files are created.

Interested in learning Django? Enroll in our Django Course now!

Here, you will see what difference this command makes inside the project directory. There is a new folder called ‘tutorial’ inside the ‘website’ directory.

Now, if you go inside the ‘tutorial’ application folder, you will see the following Python files Django created for you to configure the application.

Alright, so far in this Django tutorial, we have learned how to create an application called ‘tutorial.’ Let us now see how to build our very first web application using Django.

Creating a URL and a View for the Web Application

Step 1: First of all, paste the URL file inside the newly created application. You can copy this file from the website directory

Step 3: Go to ‘tutorial.urls.py’ and import ‘views’ as shown below. Add the app name for future reference and add the path to point to a homepage view for the tutorial app

Step 5: Now, boot up the web server and run the following command

Step 6: Open your browser location and go to the following location

You will see the string that was passed as an HttpResponse being rendered over there. This means, we have successfully created our very first Django application.

Let us see what we learned so far in this Python Django tutorial for beginners.

What did we learn so far?