Python's versatility, powerful libraries, usability, and productivity have changed the IT world. For the same reasons, Python Developers are in high demand. If you are still musing over whether to work in this domain or not, then read on to get a professional insight into what roles and responsibilities you will hold as a Python Developer. With this in mind, let us find out the answer.

Before that, let us loosely glance through the following stats.

Thus, as shown above, Python is one of the most versatile and fastest-growing programming languages.

To make you better understand the roles and responsibilities of a Python Developer, we have divided the entire blog into six main sections, which further boil down to a few baby steps and other structural carry-outs.

Python is an object-oriented, versatile, high-level programming language with dynamic semantics for web and application development. Its unique syntax and modular style design make learning stress-free. As a developer, you can read and translate Python code more easily than other languages. In addition, Python enables you to reuse and extend code in other projects.

What can you do with Python? What is Python used for?

No other programming language is as generic as Python. The language is used for web development, Internet of Things (IoT), data analysis, Machine Learning (ML), etc.

What are the reasons?

Python is Google’s official server-side language. The world’s largest Django framework, which is Instagram BTW, is written in Python.

If you want a comprehensive insight into Python’s applicability and usage, go through this Python Tutorial video!

How to become a Python Developer?

Like any other programming language, you need to do two things. The first is to learn and the second is to execute your learning.

If you are anticipating becoming a full-fledged Python Developer, take a few baby steps first. Go through our Python for beginners tutorial. Although it will definitely help you start, you must enroll yourself in an industry-recognized Python course.

If you want a comprehensive insight into the steps that you must take to learn Python, then you must read this blog on How to Become a Python Developer?

Before treading further and explaining Python Developer roles and responsibilities, let us loosely glance through the average salary of a Python Programmer working in different profiles.

Although, if you want a quick glimpse of the Python Developer career path, here is an interesting blog that will help you decode How to build a career as a Python Developer?

Python is one of the most demanding skills right now in the market. Enroll in our Python training in Bangalore and become a Python Expert! 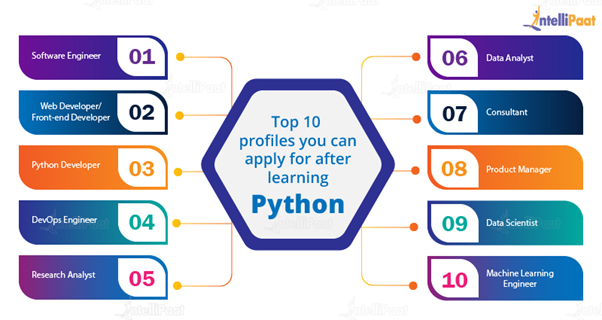 For Python Engineers, here is a list of the must-have skills:

How to take your Python skills to the next level?

If you have acquired all the necessary Python Developer roles and responsibilities and still feel that your Python knowledge is not up to the mark, then you need to move to the advanced level. To enumerate, let’s assume, you get the opportunity to work with a Data Scientist. In such a case, you will encounter ample occasions where you might feel that you just scratched the surface. Mind you, we are just talking about the intermediate or mid-level Python Developers. Anyhow, if you have such a feeling or notion, then you should rather be glad. It is important to realize that, along with assuming the roles and responsibilities, you have to learn new technologies and tools to make a transition.

Now, what areas can you tread into?

Well, you can opt for a role in DevOps or become a Data Scientist—if this excites you. Your Python knowledge can also lead you to have a successful career in Artificial Intelligence—given, you upskill your understanding of algorithms, analytics, and statistics. Now, to take your Python skills to the next level, you can enroll in our Data Science with Python. This will help you leverage your skills in the Data Science domain.

The Curious Case of NASA

As Data Science, Big Data, and Machine Learning are growing exponentially, companies around the world prefer Python over other programming languages to use in these emerging technologies. To emphasize this, let’s take NASA as an example.

First, let’s take a look at some of the issues NASA faced before using Python.

All these aforementioned issues could have been solved by C++ or Java, but the NASA programmers were in search of a language that could bring reliable results, with less money and lesser baggage.

Because Python is very easy to learn, most programmers and some non-programmers became proficient in the language. As a result, many NASA-scheduled Space Shuttle missions use Python as their core programming language.

More and more companies are looking for roles that rely heavily on Python and as you suspect, these roles are also among the most rewarding job roles. Furthermore, the jobs that require Python as a skill have also increased dramatically in recent years. Many latest research data show that Python programming skills are the highest paid among others. In addition, a Python certification can easily help you with Python jobs compared to other programming languages ​​such as R, Scala, and Java.

Intellipaat has an exceptional Online Python Certification Program to help learners expand their understanding of the Python language. All the way through the course, we offer real-time interactive sessions conducted by leading Python experts. When you sign up for the course, you will learn the most important aspects of Python, including various Python tools, Hadoop, Machine Learning, and more.

Check out this professional Full Stack Web Developer Course provided by Intellipaat to enhance your skills.

Top 12 Python Applications in the Real World You N...