Git is commonly used for recording and tracking changes made in a file. It enables various developers and programmers to work together and handle small to large projects effectively. In this list of top 18 Git commands, you will learn about the most commonly used Git commands along with examples and syntax.

Git is a free, open-source distributed version control system tool designed to handle small to very large projects with speed and efficiency. It has steadily grown from just being a preferred skill to a must-have skill for multiple job roles today. Git has become an essential part of our everyday development process.

Here are the top 18 Git commands list discussed in this tutorial:

So, let’s get started!

We have to navigate to our project directory and type the command git init to initialize a Git repository for our local project folder. Git will create a hidden .git directory and use it for keeping its files organized in other subdirectories.

This will add the specified file(s) into the Git repository, the staging area, where they are already being tracked by Git and now ready to be committed.

This will take all our files into the Git repository, i.e., into the staging area.

We can use this command as git add -A as well.

Note: We will have to commit our files after we add them to the staging area.

Prepare yourself for the industry by going through these Top DevOps Interview Questions and Answers!

This command records or snapshots files permanently in the version history. All the files, which are there in the directory right now, are being saved in the Git file system.

This command will show the modified status of an existing file and the file addition status of a new file, if any, that has to be committed.

Grab the Best DevOps Course in New York to get a clear understanding of DevOps!

Once everything is ready on our local system, we can start pushing our code to the remote (central) repository of the project. For that, follow the below steps:

Step 2: Now, we have to create a new repository. Provide a name to our repository, select the privacy of the repository as Public, and then click on Create repository 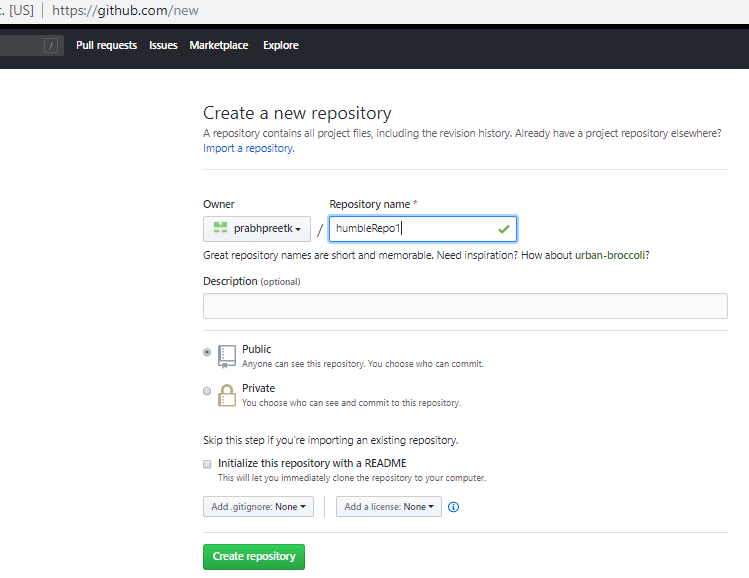 This GIT Cheat Sheet by Intellipaat is very useful and handy. Give it a read.

Once we are done with filling up the new repository form, we would land on a page as follows: 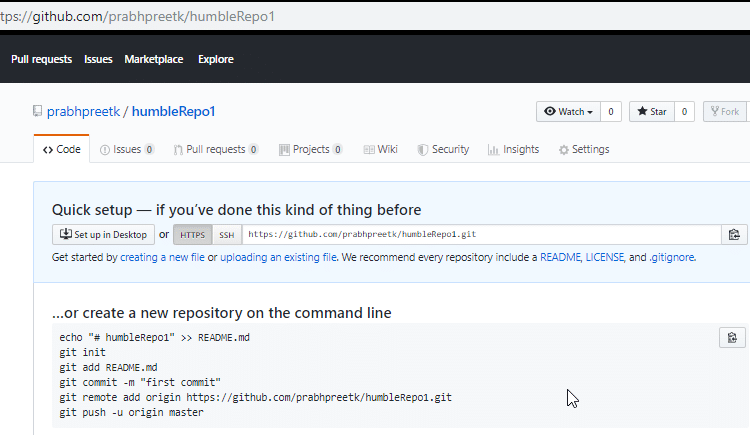 Step 3: Click on the Copy icon on the right side of the URL box of the Github repository to copy the link and paste it as shown below:

Now, we are ready to operate the remote commands in our repository that we have just created.

Learn more about DevOps in this DevOps Training in Sydney to get ahead in your career!

Suppose, we want to work on a file that is on a remote Github repository as another developer. How can we do that? We can work on this file by clicking on Clone or Download and copying the link and pasting it on the terminal with the git clone command. This will import the files of a project from the remote repository to our local system.

(1) The below screenshot shows from where to copy the link:

To create a local folder, we have to use the following command:

Now, paste the copied link along with the git clone command as shown below:

Note: Here, we don’t have to use the git remote add origin command because we have already cloned the remote repository in the local directory. Now, if we push any new file, it knows where it has to go.

So far, we saw how we can work on Git. Now, imagine, multiple developers working on the same project or repository! To handle the workspace of multiple developers, we can use branches. To create a branch (say, the ‘name-of-the-branch’ is ‘branch1’), we use this command:

Similarly, to delete a branch, we use the git branch -D command:

We use this command to navigate to an existing branch, add new files, and commit the files:

We use this command to create a branch and navigate to that particular branch (say, the ‘name-of-the-new-branch’ is ‘branch2’) at the same time:

Interested in becoming a DevOps expert? Go for this DevOps Course in Toronto and excel in your career!

This command is used when we want to check the log for every commit in detail in our repository.

Note: It will show the log of the branch we are in. We can check the last three logs by giving the command: git log -3 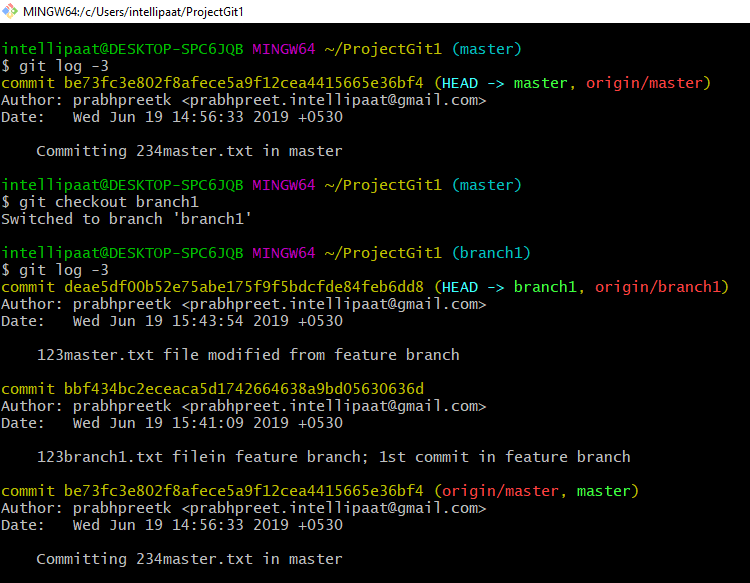 This command can be used when we want to save our work without staging or committing the code to our Git repository and want to switch between branches.

This command is used when we want to stash the untracked files.

This command is used when we are back on our branch and want to retrieve the code.

The git revert command can be considered as an ‘undo’ command. However, it does not work as the traditional ‘undo’ operation. It figures out how to invert the changes introduced by the commit and appends a new commit with the resulting inverse content.

Diffing is a function that takes two input datasets and outputs the changes between them. The git diff command is a multi-use Git command which, when executed, runs a diff function on Git data sources. These data sources can be commits, branches, files, and more. The git diff command is often used along with the git status and git log commands to analyze the current state of our Git repository. We use git log to get the details of commit IDs.

Let’s compare the working directory with the index as shown below:

Rebase is the process of moving and combining a sequence of commits to a new base commit. Rebasing is changing the base of our branch from one commit to another, making it appear as if we’ve created our branch from a different commit. Internally, Git accomplishes this by creating new commits and applying them to the specified base. It’s very important to understand that even though the branch looks the same, it is composed of entirely new commits.

The git rebase command performs an automatic git checkout <branch> before doing anything else. Otherwise, it remains on the current branch.

Note: We don’t rebase public history. We should never rebase commits once they are pushed to a public repository. Why because the rebase would replace the old commits with the new ones, and it would appear that a part of our project history got abruptly vanished.

This is particularly useful when we need to keep our repository up to date but are working on something that might break if we updated our files. To integrate the commits into our master branch, we use merge. It fetches all of the branches from the repository. It also downloads all the required commits and files from another repository.

We use this command to return the entire working tree to the last committed state.

This will discard commits in a private branch or throw away the uncommitted changes!

Here, we have executed a ‘hard reset’ using the –hard option. Git displays the output indicating that the HEAD is pointing to the latest commit. Now, when we check the state of the repo with git status, Git will indicate that there are no pending changes (if any prior addition of a new file or modification of an existing file is done before using the ‘git reset –hard’ command). Our modifications to an existing file, if not committed, and the addition of a new file, if not staged, will be destroyed. It is critical to take note that this data loss cannot be undone.

If we do git reset –hard [SOME-COMMIT], then Git will:

The git pull command first runs ‘git fetch’ which downloads the content from the specified remote repository and then immediately updates the local repo to match the content.

Get in touch with Intellipaat for a comprehensive DevOps Training and be a certified DevOps Engineer!

Git and Its Popularity

Git is one of the most important version control systems that has experienced a significant growth rate and popularity over the years. Git plays a key role in both developers’ and non-developers world. If we are part of the software developers’ world, it is expected that we know Git. So, having a good grasp of common Git commands is very beneficial for us to get into a lucrative career. 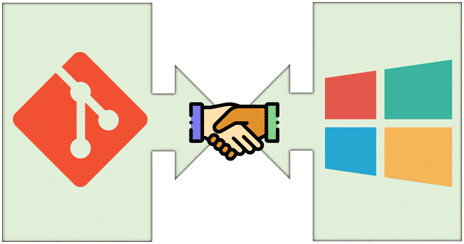 Even Microsoft has started leveraging Git very recently. This opens up more opportunities for the developers’ community. Hence, it is the right time to learn Git.

Hopefully, you have understood Git and got answers to the questions: ‘What are Git commands?’ and ‘What do Git commands do?

To have a deeper level of understanding of different version control systems with hands-on exercise, you can enroll in this DevOps Certification Training Course provided by Intellipaat. Do let us know in the comment section if this blog on Git commands for beginners was helpful to you.

3 thoughts on “Top 18 Git Commands with Examples and Syntax”