This part of the DevOps tutorial includes the Ansible cheat sheet. In this part, you will learn various aspects of Ansible that are crucial to know when facing the interview board. In addition to that, you will get familiar with the most important Ansible terminology and the common commands used in Ansible.

It is usually difficult to remember all the commands that you need to work with Ansible all at once, especially if you are a beginner and have no idea about how Ansible works. This is why we have come up with this Ansible cheat sheet so that you get a quick reference to the basics of Ansible to get started. 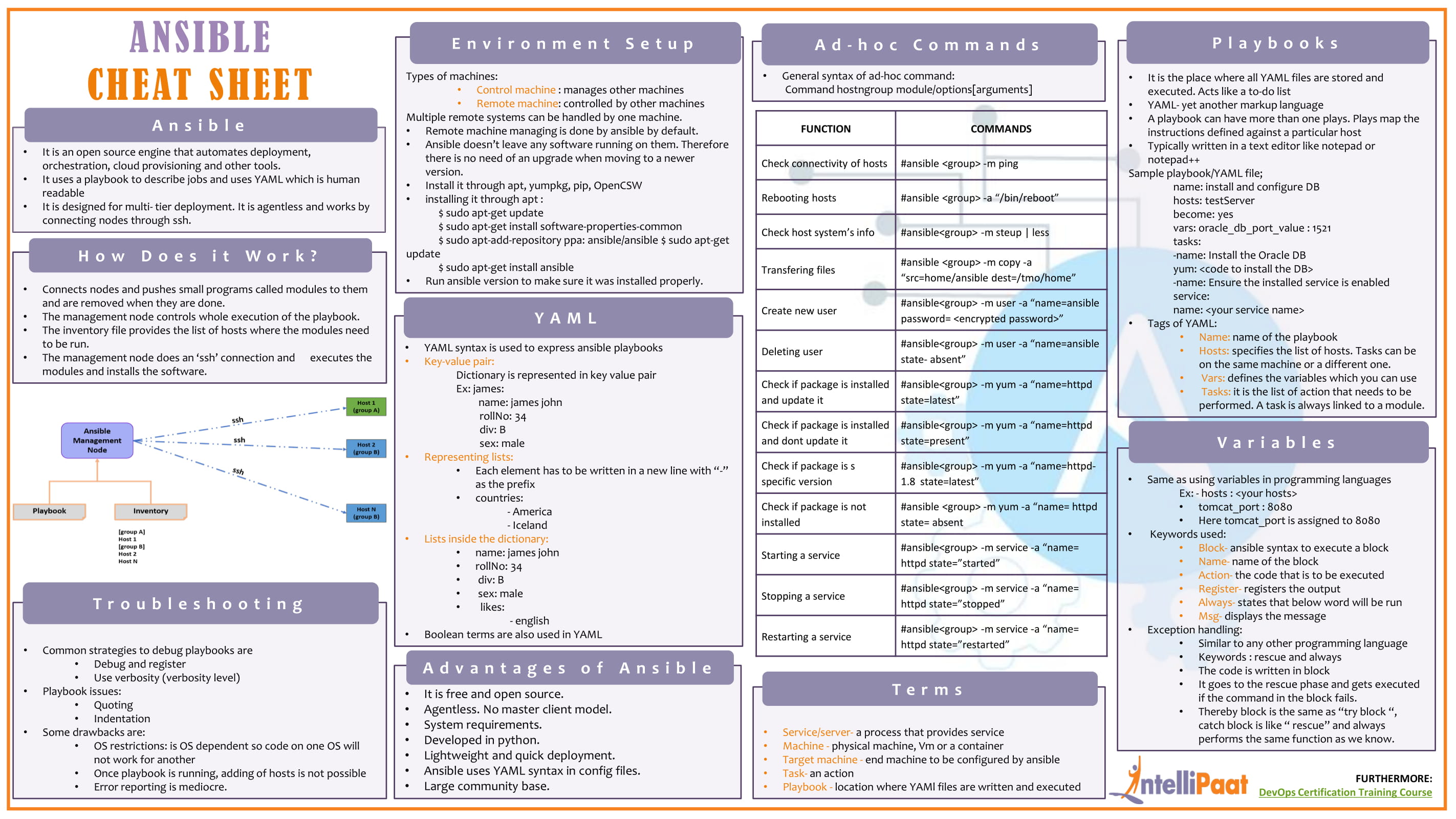 We, at Intellipaat, are keen to support our learners in all possible means; hence, we have created this handy reference, the Ansible cheat sheet.

This cheat sheet is designed for you if you have already started learning Ansible but need a quick and handy reference to recall what you have learned.

Go through these Top DevOps Interview Questions and Answers and be ready to grab a DevOps job!

Ansible is an open-source engine that automates deployment, orchestration, cloud provisioning, and other tools. It uses a playbook, to describe jobs, and YAML, which is a human-readable programming language. Ansible is designed for multi-tier deployment. It is agentless and works by connecting nodes through SSH.

Become a DevOps master by learning end-to-end DevOps from this online DevOps Training in London!

How does it work?

Ansible connects nodes, pushes small programs called modules to the nodes, and then removes them when they are done. 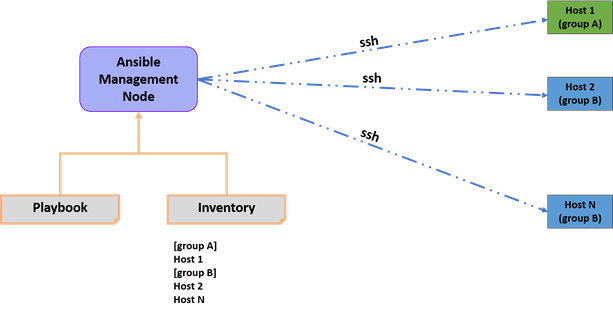 In the above diagram:

Enroll in the Best DevOps Course in New York to know DevOps from scratch!

Before moving forward to work with commands, let’s understand how to set up an Ansible machine.

First, let’s discuss the types of machines used when it comes to deployment.

Multiple remote machines can be handled by a single control machine, and it is done through Ansible by default.

Before we get into the important Ansible commands, first, let’s understand its basic terminology.

As mentioned earlier, YAML (Yet Another Markup Language) is a human-readable programming language. YAML syntax is used to express the Ansible playbooks.

Here are some basic concepts of YAML.

Dictionary is represented in key/value pairs.

Each element in a list has to be written in a new line with ‘-‘ as a prefix.

We can have lists inside a dictionary.

Learn more about DevOps from Intellipaat’s DevOps Training in Sydney!

An ad-hoc command is a command that we would use to do something really quick but would not want to save for later, i.e., we might not use this command in the future.

General syntax of an ad-hoc command:

If you have any more queries related to DevOps, visit our DevOps Community and get them clarified in no time!

It is the place where all the YAML files are stored and executed. It acts as a to-do list.

Some general tags of YAML:

Looking forward to becoming a DevOps expert? Sign up with this DevOps Course in Toronto now!

It is similar to using variables in any other programming language.

Here, the tomcat_port is the variable, and it has been assigned to Port 8080.

Exception handling is similar to that of any other programming language.

The code is written in the block. It goes to the rescue phase and gets executed if the command in the block fails.

The ‘always’ keyword is similar to the regular ‘always’ and is executed no matter what the state is. Therefore, the ‘block’ keyword is the same as ‘try block’, and ‘catch block’ is like ‘rescue’.

Wish to grab an industry-recognized certification in DevOps? Enroll in Intellipaat’s DevOps Course in Bangalore today!

The most common strategies to debug playbooks are:

Some of its drawbacks are:

DevOps Engineers are among the highest paid professionals in the IT domain. What are you waiting for? Join DevOps Training in Hyderabad now!

With this, we have come to the end of this Ansible cheat sheet tutorial. We have covered all the basics of Ansible here.

In our comprehensive DevOps training course, not only will you get to learn and implement Ansible with ample guidance from us, but you will also learn other important topics in DevOps such as Docker, Git/GitHub, Chef, Jenkins, Puppet, Selenium, Nagios, etc.

You will also get round-the-clock technical support from our DevOps experts who will help you with all your queries.

So, why wait? Join Intellipaat’s extensive DevOps Training and be a certified DevOps Engineer!

Watch this Ansible Tutorial for Beginners video to learn more: