This Docker cheat sheet, along with the quick explanations on all the common Docker commands, will help you be up and running while working in the domain of Docker.

Are you finding difficulty remembering all the commands that you need in order to work with Docker?

Guys, don’t worry! This Docker cheat sheet will give you a quick reference to the basics of Docker that you must know to get started with it.

At Intellipaat, we support our learners with a handy reference, that’s the reason we have created this cheat sheet. It is designed for those who have already started learning Docker but need a handy reference to recall the concepts that they have learned. 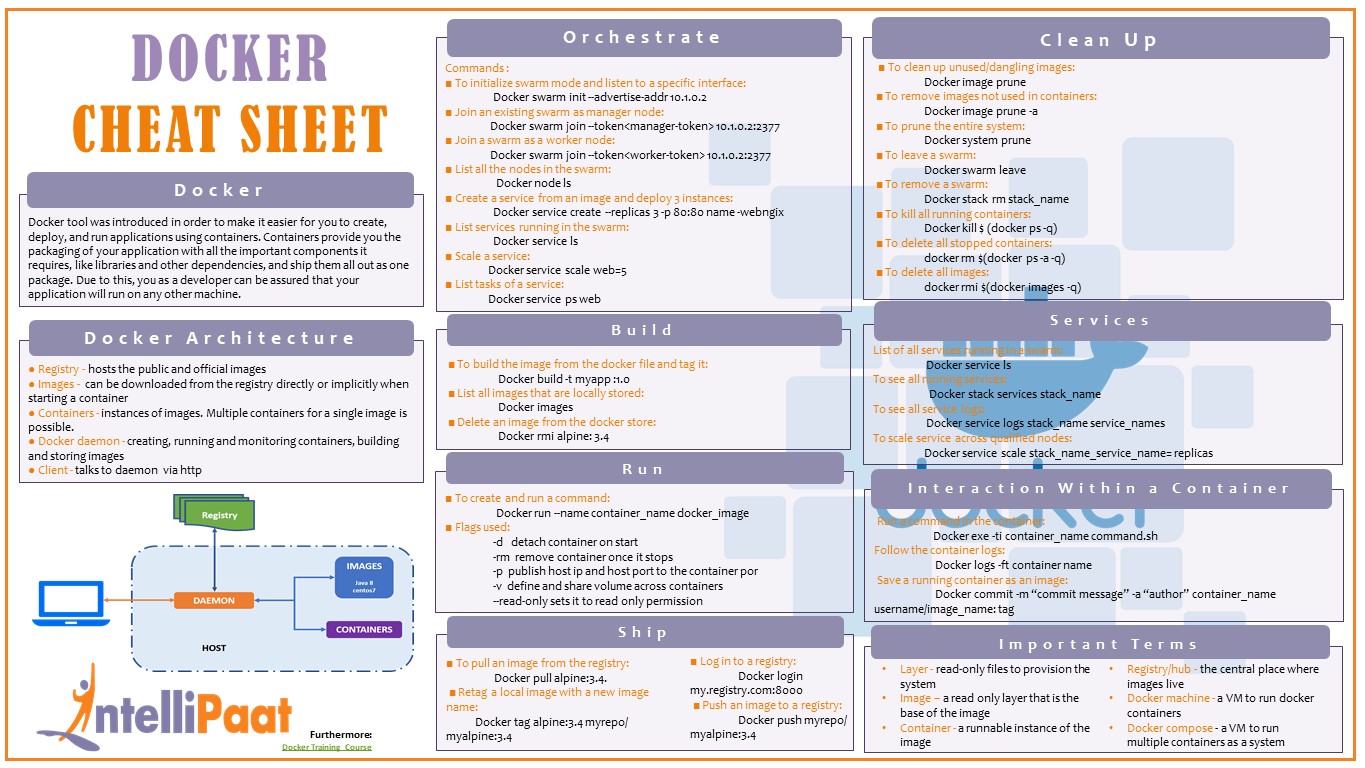 We will start this tutorial by understanding the Docker architecture and the main aspects in it, and then we will continue with the important commands required for the Docker operations, such as Docker installation, build, push, run, ship, clean up, and the interaction with the container.

Become a master of DevOps by enrolling in this online DevOps Training in London!

Join the Best DevOps Course in New York to get a clear understanding of DevOps!

Orchestration is used for managing a container’s life cycle, especially in dynamic environments. It is used for controlling and automating many tasks for containers.

Learn more about DevOps in this DevOps Training in Sydney and get ahead in your career!

Equip yourself with these Top DevOps Interview Questions and Answers to ace your career!

The build command is used for building images from a Docker file. Let’s now check out some of the essential Docker build commands.

Do you have queries related to DevOps? Visit our DevOps Community and get your queries clarified by the DevOps experts!

The run command is used for creating a container from a specified image. Check out the below-listed run commands.

Docker gives us the capability of shipping our application container anywhere, on any platform. Let’s check out some commands used for it.

To prevent wasting resources, we must know how to clean up. In this Docker cheat sheet tutorial, next, a few essential clean-up commands are provided.

To see all running services:

To see all service logs:

To scale a service across qualified nodes:

Interested in getting an industry-recognized certification in DevOps? Enroll in Intellipaat’s DevOps Course in Bangalore today!

Interaction with a Container

Let’s check out how to make an interaction with a container in Docker.

To run a command in a container:

To save a running container as an image:

DevOps Engineers are among the highest paid professionals in the technology domain. So why wait? Join the next batch of DevOps Training in Hyderabad!

Some of the important terms to know about while using Docker containers are listed below:

We have covered all the basics of Docker in this Docker commands cheat sheet. If you want to start learning DevOps in-depth, then check out the DevOps certification training offered by Intellipaat.

Not only will you get to learn and implement Docker with step-by-step guidance and support from us but you will also get to learn other important topics in DevOps such as Chef, Git/GitHub, Ansible, Jenkins, Puppet, Selenium, Nagios, and many more.

Here, at Intellipaat, you will also get 24/7 technical support from us that will help you with any of your queries in the respective technologies throughout the certification period. So, why wait? Check out the training program and enroll today!

Get in touch with Intellipaat for enrolling in its DevOps Training and being a certified DevOps Engineer!