This part of the DevOps tutorial includes the Chef cheat sheet. In this part, you will learn various aspects of Chef that are possibly asked in interviews. Also, you will have a chance to understand the most important Chef terminology.

Are you finding difficulty in remembering all the commands that you need in order to work with Chef? Don’t worry, guys, this Chef cheat sheet will give you a quick reference to the basics that you must know to get started with Chef. 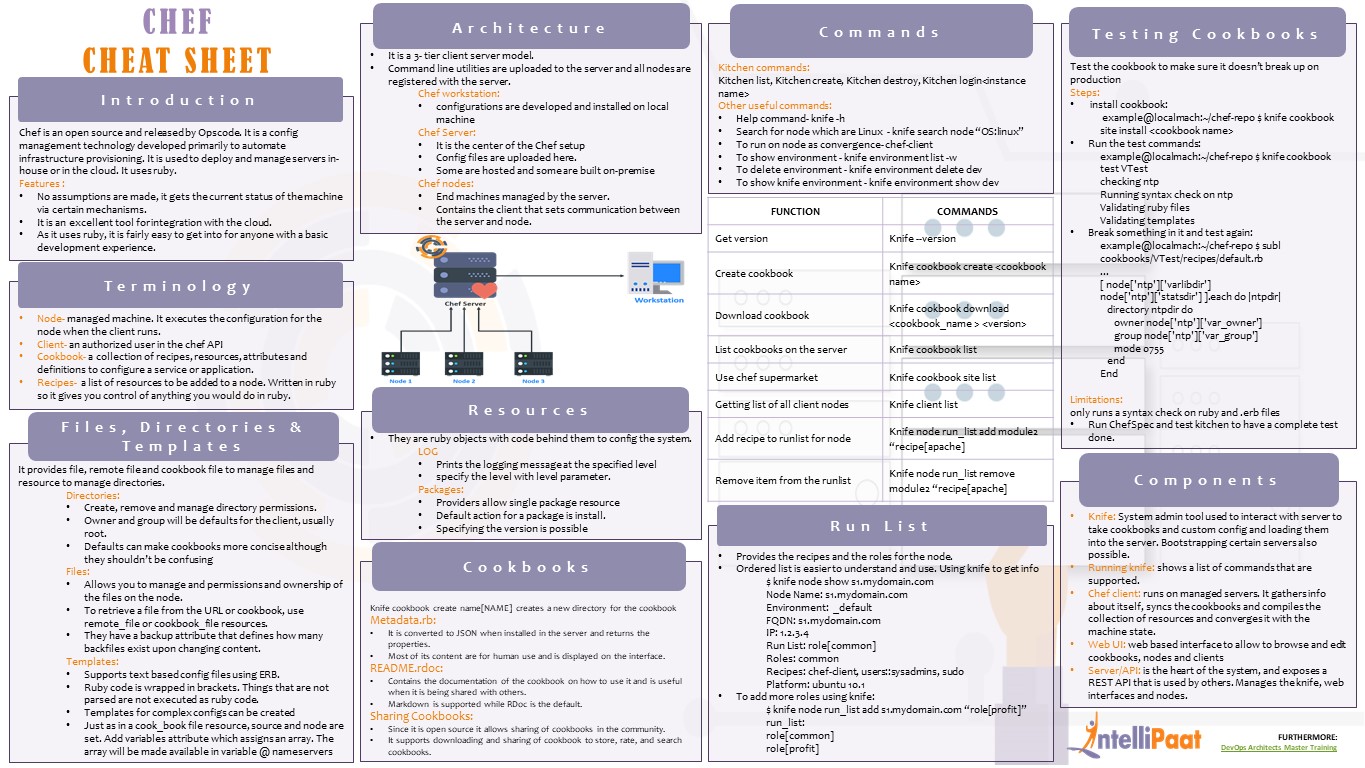 We, at Intellipaat, are ready to support our learners in all possible ways, and that’s the reason we have created this handy reference, the Chef cheat sheet. This cheat sheet is designed for those who have already stepped forward into learning Chef but needs a more handy aid.

Prepare yourself for any DevOps job interview by going through these Top DevOps Interview Questions and Answers!

Now, let’s move ahead to discuss the features of Chef.

Before proceeding toward its components and basic commands, let’s first understand the basic terms used in Chef.

Become a master of DevOps by going through this online DevOps Training in London!

Now, let’s check out the important components used in Chef.

Chef basically works on a three-tier client–server model. Command-line utilities are uploaded to the server, and all nodes are registered with the server.

Chef has three main players in its architecture; they are Chef Workstation, Chef Server, and Chef Nodes. 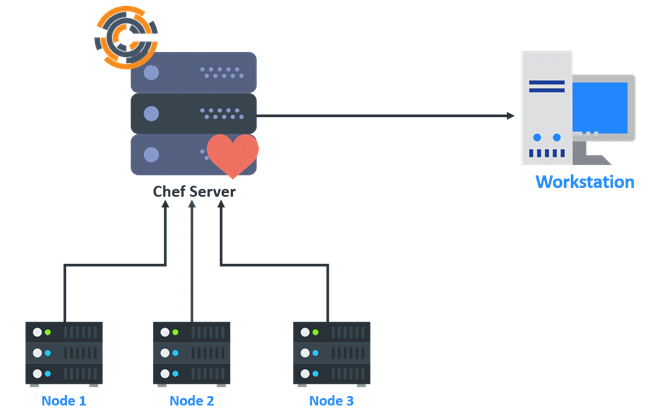 Learn more about DevOps in this DevOps Training in Sydney and excel in your career!

A run-list provides recipes and roles required for a node. Unlike the other config management tools, it makes us define a relationship between resources. Hence, an ordered list is easier to understand and use.

The above server has one run-list.

If you have doubts or queries related to DevOps, get them clarified from the DevOps experts on our DevOps Community!

A cookbook is a working unit of Chef that is used for configuration and policy distribution. It will define a scenario and will contain everything that is required to provide that scenario.

It is converted to JSON when it gets installed in the server and returns the name, version, and other properties. Most of the contents in it are for human use and are displayed on the interface.

The main parts are ‘version’ and ‘depends’ statements.

Interested in becoming a DevOps expert? Sign up for our DevOps Course in Toronto and excel in your career!

It contains the documentation of the cookbook on how to use it, and this is useful when it is being shared with others. Markdown is supported while rdoc is the default.

We need to test the cookbook to make sure that it doesn’t break down during production. How do we test a cookbook? Let’s check out the steps to test a cookbook.

Resouces are Ruby objects with code behind them to config the system. Each resource contains providers that tell the system how to run it.

It provides a file, remote file, and cookbook file to manage files and a resource to manage directories.

DevOps Engineers are among the highest paid professionals in the technology domain? Join the DevOps Training in Hyderabad and be one!

The command to search for a node in Linux:

The command to run on a node as a convergence:

The command to show the environment:

The command to delete the environment:

The command to show the knife environment:

We have covered all the basics of Chef in this Chef cheat sheet. If you want to start learning DevOps in-depth, then check out the DevOps Certification designed by Intellipaat.

Not only will you get to learn and implement Chef with step-by-step guidance and support from us but you will also get to learn other important topics in DevOps such as Docker, Git/GitHub, Ansible, Jenkins, Puppet, Selenium, Nagios, and many more.

With Intellipaat, you will also get 24/7 technical support from us, which will help you with any of your queries in the respective technologies throughout the certification period. So, why wait? Check out the training program and enroll today!