Apache Hive is an open-source data warehouse system that has been built on top of Hadoop. You can use Hive for analyzing and querying large datasets that are stored in Hadoop files. Processing structured and semi-structured data can be done by using Hive.

Let’s look at the agenda for this section first:

What is Hive in Hadoop?

Don’t you think writing MapReduce jobs is tedious work? Well, with Hadoop Hive, you can just go ahead and submit SQL queries and perform MapReduce jobs. So, if you are comfortable with SQL, then Hive is the right tool for you as you will be able to work on MapReduce tasks efficiently. Similar to Pig, Hive has its own language, called HiveQL (HQL). It is similar to SQL. HQL translates SQL-like queries into MapReduce jobs, like what Pig Latin does. The best part is that you don’t need to learn Java to work with Hadoop Hive.

Watch this video on HIVE by Intellipaat:

Hadoop Hive runs on our system and converts SQL queries into a set of jobs for execution on a Hadoop cluster. Basically, Hadoop Hive classifies data into tables providing a method for attaching the structure to data stores in HDFS.

Facebook uses Hive to address its various requirements, like running thousands of tasks on the cluster, along with thousands of users for a huge variety of applications. Since Facebook has a huge amount of raw data, i.e., 2 PB, Hadoop Hive is used for storing this voluminous data. It regularly loads around 15 TB of data on a daily basis. Now, many companies, such as IBM, Amazon, Yahoo!, and many others, are also using and developing Hive.

To know more about Hive, check out our Big Data Hadoop blog!

Why do we need Hadoop Hive?

Let’s now talk about the need for Hive. To understand that, let’s see what Facebook did with its big data.

Basically, there were a lot of challenges faced by Facebook before they had finally implemented Apache Hive. One of those challenges was the size of data that has been generated on a daily basis. Traditional databases, such as RDBMS and SQL, weren’t able to handle the pressure of such a huge amount of data. Because of this, Facebook was looking for better options. It started using MapReduce in the beginning to overcome this problem. But, it was very difficult to work with MapReduce as it needed mandatory programming expertise in SQL. Later on, Facebook realized that Hadoop Hive had the potential to actually overcome the challenges it faced.

Apache Hive helps developers get away with writing complex MapReduce tasks. Hadoop Hive is extremely fast, scalable, and extensible. Since Apache Hive is comparable to SQL, it is easy for the SQL developers as well to implement Hive queries.

Additionally, the Hive is capable of decreasing the complexity of MapReduce by providing an interface wherein a user can submit various SQL queries. So, technically, you don’t need to learn Java for working with Apache Hive.

Let’s now talk about the Hadoop Hive architecture and the major working force behind Apache Hive. 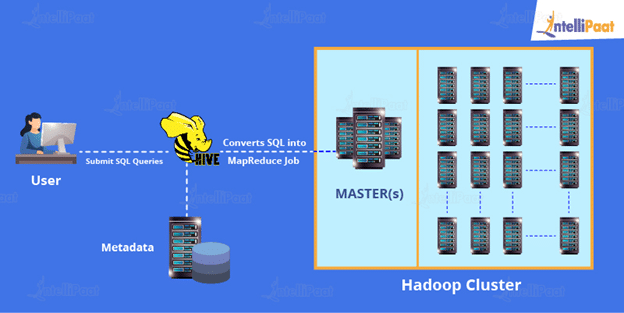 The components  of Apache Hive are as follows:

Do you still have queries on Hive do post them on our Big Data Hadoop and Spark Community!

Differences Between Hive and Pig

You can even check out which is better. Hive and HBase in your case, by going through Hive vs Hbase blog.

Let’s now look at the features of Apache Hive:

Though Hive is a progressive tool, it has some limitations as well.

That is all for this Apache Hive tutorial. In this section about Apache Hive, you learned about Hive that is present on top of Hadoop and is used for data analysis. It uses a language called HiveQL that translates SQL-like queries into relevant MapReduce jobs. In the upcoming section of this Hadoop tutorial, you will be learning about Hadoop clusters.