This part of the Hadoop tutorial will introduce you to the Apache Hadoop framework, overview of the Hadoop ecosystem, high-level architecture of Hadoop, the Hadoop module, various components of Hadoop like Hive, Pig, Sqoop, Flume, Zookeeper, Ambari and others.

What is Apache Hadoop?

Apache Hadoop was born to enhance the usage and solve major issues of big data. The web media was generating loads of information on a daily basis, and it was becoming very difficult to manage the data of around one billion pages of content. In order of revolutionary, Google invented a new methodology of processing data popularly known as MapReduce. Later after a year Google published a white paper of Map Reducing framework where Doug Cutting and Mike Cafarella, inspired by the white paper and thus created Hadoop to apply these concepts to an open-source software framework that supported the Nutch search engine project. Considering the original case study, Hadoop was designed with much simpler storage infrastructure facilities.

Apache Hadoop is the most important framework for working with Big Data. Hadoop biggest strength is scalability. It upgrades from working on a single node to thousands of nodes without any issue in a seamless manner.

Google’s Doug Cutting and his team members developed an Open Source Project namely known as HADOOP which allows you to handle the very large amount of data. Hadoop runs the applications on the basis of MapReduce where the data is processed in parallel and accomplish the entire statistical analysis on large amount of data.

It is a framework which is based on java programming. It is intended to work upon from a single server to thousands of machines each offering local computation and storage. It supports the large collection of data set in a distributed computing environment. 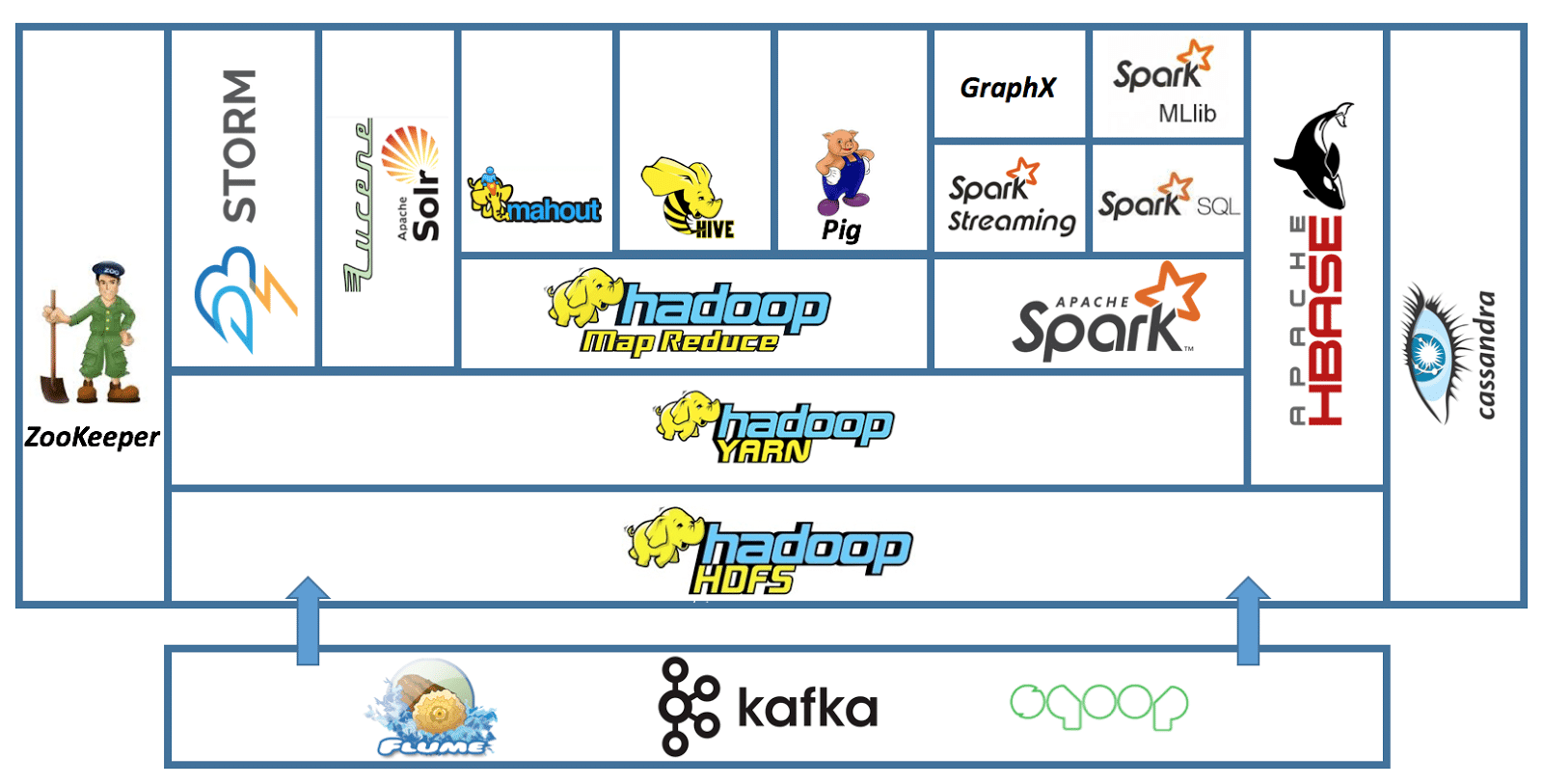 Hadoop was created by Doug Cutting and hence was the creator of Apache Lucene. It is the widely used text to search library. Hadoop has its origins in Apache Nutch which is an open source web search engine itself a part of the Lucene project.

Different Hadoop Architectures based on the Parameters chosen 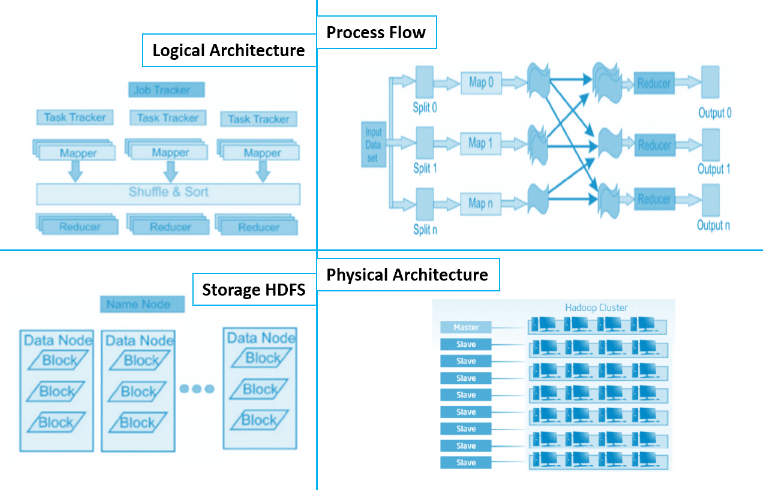 Hadoop Common: Includes the common utilities which supports the other Hadoop modules

Hadoop YARN: This technology is basically used for scheduling of job and efficient management of the cluster resource.

MapReduce: This is a highly efficient methodology for parallel processing of huge volumes of data. 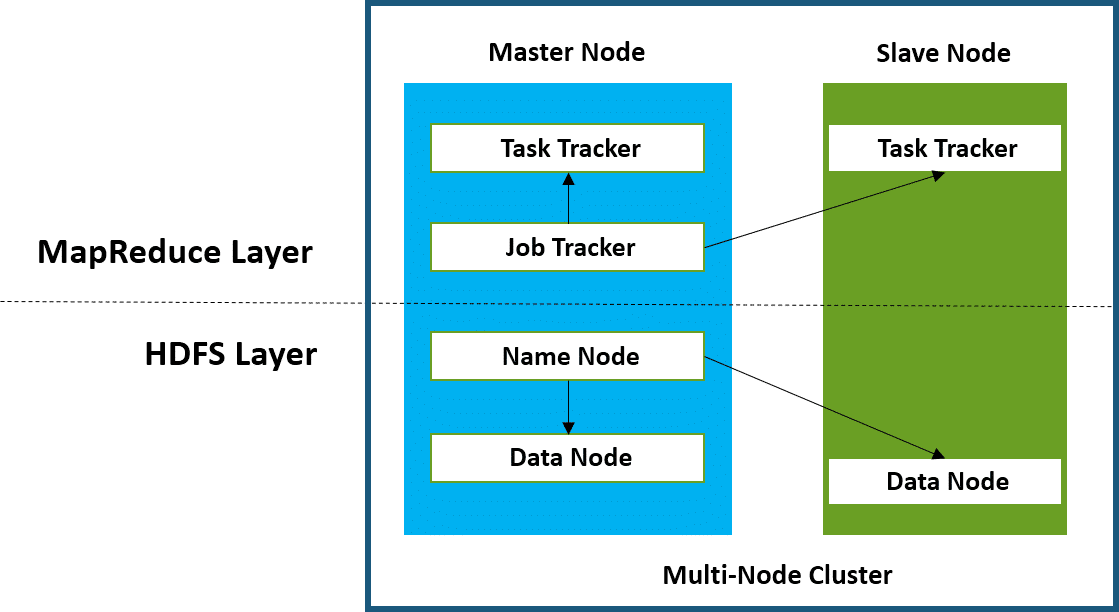 Then there are other projects included in the Hadoop module which are less used:

Apache Ambari: It is a tool for managing, monitoring and provisioning of the Hadoop clusters. Apache Ambari supports the HDFS and MapReduce programs. Major highlights of Ambari are:

Cassandra: It is a distributed system to handle extremely huge amount of data which is stored across several commodity servers. The database management system (DBMS)is highly available  with no single point of failure.

HBase: it is a non-relational, distributed database management system that works efficiently on sparse data sets and it is highly scalable.

Apache Spark: This is highly agile, scalable and secure the Big Data compute engine, versatiles the sufficient work on a wide variety of applications like real-time processing, machine learning, ETL and so on.

Hive: It is a data warehouse tool basically used for analyzing, querying and summarizing of analyzed data concepts on top of the Hadoop framework.

Pig: Pig is a high-level framework which ensures us to work in coordination either with Apache Spark or MapReduce to analyze the data. The language used to code for the frameworks are known as Pig Latin.

Sqoop: This framework is used for transferring the data to Hadoop from relational databases. This application is based on a command-line interface.

Oozie: This is a scheduling system for workflow management, executing workflow routes for successful completion of the task in a Hadoop.

Zookeeper: Open source centralized service which is used to provide coordination between distributed applications of Hadoop. It offers the registry and synchronization service on a high level.

The Intended Audience and Prerequisites

Big Data and analytics are the most interesting domains to build your image in our IT world. There is a scope for Big Data and Hadoop professionals . This intend towards those individuals who are awed by the sheer might of Big Data and highly influence commands in corporate boardrooms and who is keen to take up a career in Big Data and Hadoop.

If an individual aspire to become an Big Data and Hadoop Developer or Administrator, Architect, Analyst, Scientist, Tester and who owns an corporate designation such as Chief Technology Officer, Chief Information Officer, or even a Technical Manager of any enterprise.

Apache Hive and Pig are high-level programming languages tools and there is no compulsory usage of Java or Linux It allows creating your own MapReduce program in any programming language like Ruby, Python, Perl and even C programming. Hence now the requirement is made easy to understand the computer programming logic and deductions. Remaining is add-on and can be easily understood in a short duration of time.

How does Hadoop Work?

Hadoop helps to execute large amount of processing where the user can connect together multiple commodity computers to a single-CPU, as a single functional distributed system and have the particular set of clustered machines that reads the dataset in parallel and provide intermediate, and after integration gets the desired output.

Hadoop runs code across a cluster of computers and performs the following tasks:

The above methodology guide you to become professional of Big Data and Hadoop and ensuring enough skills to work in an industrial environment and solve real world problems and gain solutions for the better progressions.

The Challenges facing Data at Scale and the Scope of Hadoop

Big Data are categorized into:

There is a standardized methodology that Big Data follows highlighting usage methodology of ETL.

Transform – convert the existing data to fit into the analytical needs

Load –right systems to derive value in it.

Most database management systems are not up to scratch for operating at such lofty levels of Big data exigencies either due to the sheer technical inefficient. When the data is totally unstructured, the volume of data is humongous, where the results are at high speeds, then finally only platform that can effectively stand up to the challenge is Apache Hadoop.

Hadoop majorly owes its success to a processing framework called as MapReduce that is central to its existence. The MapReduce technology gives opportunity to all programmers contributes their part where large data sets are divided and are independently processed in parallel. These coders doesn’t need to knew the high-performance computing and can work efficiently without worrying about intra-cluster complexities, monitoring of tasks, node failure management, and so on.

Hadoop also contributes it’s another platform namely known as Hadoop Distributed File System (HDFS). The main strength of HDFS is its ability to rapidly scale and work without a hitch irrespective of any fault with the nodes. HDFS in essence divides large file into smaller blocks or units ranging from 64 to 128MB later are copied onto a couple of nodes of the cluster. From this HDFS ensures no work would stop even when some nodes going out of service. HDFS owns APIs to ensure The MapReduce program is used for reading and writing data (contents) simultaneously at high speeds. When there is a need to speed up performance, and then add extra nodes in parallel to the cluster and the increased demand can be immediately met.

Watch this video on ‘Hadoop Tutorial for Beginners?’:

Apache Hadoop is the most popular and powerful big data tool, which  provides world’s best reliable storage layer –HDFS(Hadoop Distributed File System), a batch Processing engine namely  MapReduce and a Resource Management Layer like YARN. Open-source – Apache Hadoop is an open source project. It means its code can be modified according to business requirements.

Hadoop is written with huge amount of clusters of computers in mind and is built upon the following assumptions:

The following are the design principles on which Hadoop works: