In this section of the Hadoop tutorial, on Apache Flume, we shall be learning about features, architecture, and advantages of Apache Flume.

What is Apache Flume in Hadoop?

Apache Flume is basically a tool or a data ingestion mechanism responsible for collecting and transporting huge amounts of data such as events, log files, etc. from several sources to one central data store. Apache Flume is a unique tool designed to copy log data or streaming data from various different web servers to HDFS.

Before going further, let’s look at the features of Flume:

Refer to the image below for understanding the Flume architecture better. In Flume architecture, there are data generators that generate data. This data that has been generated gets collected by Flume agents. The data collector is another agent that collects data from various other agents that are aggregated. Then, it is pushed to a centralized store, i.e., HDFS. 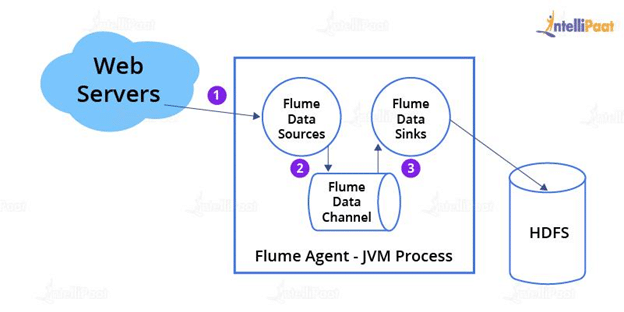 Let’s now talk about each of the components present in the Flume architecture:

Now, that we have seen in-depth the architecture of Flume, let’s look at the advantages of Flume as well.

Here are the advantages of using Flume −

Now, we come to the end of this tutorial on Flume. We learned about Apache Flume in depth along with that we saw the architecture of Flume.