Home / Tutorial / What is HDFS?

What is HDFS in Hadoop? In this section of the Hadoop tutorial, we will be focusing on ‘What is HDFS?’, why we need HDFS, HDFS architecture, and the benefits of HDFS.

So, what is HDFS? HDFS or Hadoop Distributed File System, which is completely written in Java programming language, is based on the Google File System (GFS). Google had only presented a white paper on this, without providing any particular implementation. It is interesting that around 90 percent of the GFS architecture has been implemented in HDFS.

HDFS was formerly developed as a storage infrastructure for the Apache Nutch web search engine project, and hence it was initially known as the Nutch Distributed File System (NDFS). Later on, the HDFS design was developed essentially for using it as a distributed file system.

HDFS is extremely fault-tolerant and can hold a large number of datasets, along with providing ease of access. The files in HDFS are stored across multiple machines in a systematic order. This is to eliminate all feasible data losses in the case of any crash, and it helps in making applications accessible for parallel processing. This file system is designed for storing a very large amount of files with streaming data access.

Before going further in this ‘What is HDFS in Hadoop?’ tutorial, let’s see what we shall be learning in this section:

To know ‘What is HDFS in Hadoop?’ in detail, let’s first see what a file system is? Well, a file system is one of the fundamental parts of all operating systems. It basically administers the storage in the hard disk.

Why do you need another file system?

Now, you know ‘What is HDFS in Hadoop?’ It is basically a file system. But, the question here is, why do you need another file system?

Have you ever used a file system before?

The answer would be yes!

When you’re using some portable device or laptop every single day for checking WhatsApp or Instagram or for reading this tutorial, you are actually using a file system, unknowingly.

Let’s say, a person has a book and another has a pile of unordered papers from the same book and both of them need to open Chapter 3 of the book. Who do you think would get to Chapter 3 faster?

The one with the book, right? Because, that person can simply go to the index, look for Chapter 3, check out the page number, and go to the page. Meanwhile, the one with the pile of papers has to go through the entire pile and if he is lucky enough, he might find Chapter 3.

Just like a well-organized book, a file system helps navigate data that is stored in your storage.

Without a file system, the information stored in your hard disk will be a large body of data in which there would be no way to tell where one piece of information stops and the next begins.

The file system manages how a dataset is saved and retrieved. So, when reading and writing of files is done on your hard disk, the request goes through a distinct file system. The file system has some amount of metadata of your files such as size, filename, created time, owner, modified time, etc.

When you want to write a file to a hard disk, the file system helps in figuring out where in the hard disk the file should be written and how efficiently it can do so. How do you think the file system manages to do that? Since it has all the details about the hard disk, including the empty spaces available in it, it can directly write that particular file there.

Now, we will talk about HDFS, by working with Example.txt which is a 514 MB file.

When you upload a file into HDFS, it will automatically be split into 128 MB fixed-size blocks (In the older versions of Hadoop, the file used to be divided into 64 MB fixed-size blocks). So basically, it takes care of placing the blocks in three different DataNodes by replicating each block three times.

Now that you have understood why you need HDFS, next in this section on ‘What is HDFS?’ let’s see why it is a perfect match for big data.

Why does HDFS work very well with Big Data?

HDFS is a perfect tool for working with big data. The following list of facts proves it.

Next up in the section on ‘What is HDFS?’ of this Hadoop Tutorial, let’s see the architecture of HDFS.

The following image gives the most important components present in the HDFS architecture. It has a Master-Slave architecture and has several components in it. 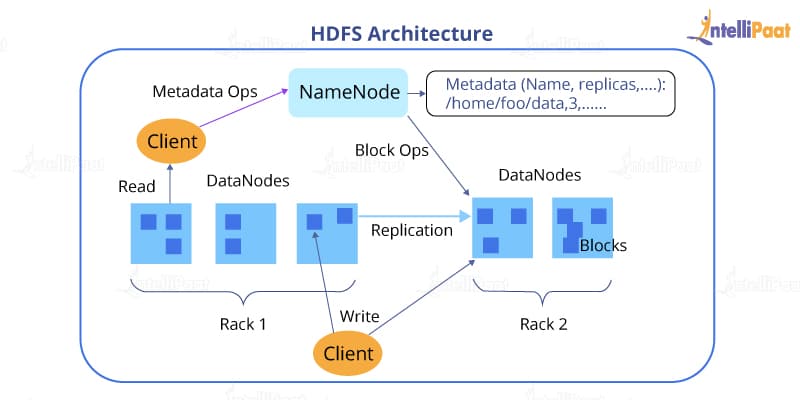 Let’s start with the basic two nodes in the HDFS architecture, i.e., the DataNode and the NameNode.

Do you still have queries on ‘HDFS,’ do post them on our Big Data Hadoop and Spark Community!

Nodes wherein the blocks are physically stored are known as DataNodes. Since these nodes hold the actual data of the cluster, they are termed as DataNodes. Every DataNode knows the blocks it is responsible for, but it might sometimes miss some major information.

Although the DataNode knows about the block it is responsible for, it doesn’t care to know about the other blocks and the other DataNodes. This is a problem for you as a user because you don’t know anything about the blocks other than the file name, and you should be able to work only with the file name in the Hadoop cluster.

To gain more knowledge, sign up for Intellipaat’s Hadoop Training in Bangalore.

Why is a NameNode so important? Imagine that a NameNode is down in your Hadoop cluster. In this scenario, there would be no way you could look up for the files in the cluster because you won’t be able to figure out the list of blocks made up of the files. Also, you won’t be able to figure out the location of the blocks. Apart from the block locations, a NameNode also has the metadata of the files and folders in HDFS, which includes information like, the size, replication factor, created by, created on, last modified by, last modified on, etc.

Due to the significance of the NameNode, it is also called the master node, and the DataNodes are called slave nodes, and hence the master–slave architecture.

NameNode persists all the metadata information about the files and folder and hard disk, except for the block location. 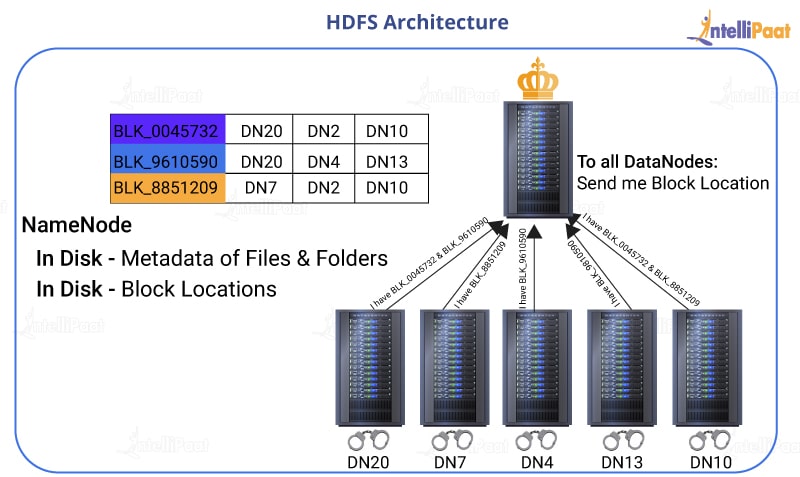 Since NameNodes are in constant communication with each other, when a NameNode starts up, the DataNodes will try to connect with the NameNode and broadcast the list of blocks that each of them is responsible for. The NameNode will hold the block locations in memory and never persist the information in the hard disk. Because, in a busy cluster HDFS is constantly changing with the new data files coming into the cluster, and if the NameNode has to persist every change to the block by writing the information to a hard disk, it would be a bottleneck. Hence, with  performance reasons in mind, the NameNode will hold the block locations in memory so that it can give a faster response to the clients. Therefore, it is clear that the NameNode is the most powerful node in the cluster in terms of capacity. A NameNode failure is clearly not an option.

Check out the Big Data Hadoop Training in Sydney and learn more!

The functions of a secondary NameNode are listed below:

HDFS blocks are huge compared to disk blocks and they are designed this way for cost reduction.

By making a particular set of blocks large enough the time consumed for transferring data from the disk can be reduced. Therefore, with HDFS, the time consumed to transfer a huge file made up of multiple blocks works at a faster disk transfer rate.

In the next part of this ‘What is HDFS?’ tutorial, let’s look at the benefits of HDFS.

Now, we come to the end of this section on ‘What is HDFS?’ of the Hadoop tutorial. We learned ‘What is HDFS?’, the need for HDFS, and its architecture. In the next section of this tutorial, we shall be learning about HDFS Commands.