In MongoDB, the purpose of a database is to store all collections and these collections in turn store all the documents. A MongoDB document contains specific names, values, and IDs. Let’s explore more!

What is a Database Command?

Kick-start your career in MongoDB with the perfect MongoDB Training Course now!

The most important part of MongoDB create database is MongoDB insert command to insert data into MongoDB collection. We can use two methods here; they are insert() or save()methods.

The basic syntax of MongoDB insert command is as follows:

In the above code, mycommand is the name of our MongoDB collection. If the collection doesn’t exist in the database, then MongoDB creates the collection itself and then inserts a document into it.

In the MongoDB document that we have inserted, if we don’t specify the _id parameter, then MongoDB assigns a unique ObjectId for this document by default.
Let me tell you about the _id. It is a 12-byte hexadecimal number unique for every document in a collection. 12 bytes are divided as follows:

Let’s see an example of code with _id:

The find() command will give us our data and the pretty() command is used to display the result in a formatted way.

Further in this tutorial, we will cover MongoDB find command in detail.

Get familiar with the top MongoDB Interview Questions to get a head start in your career!

However, we do not need to worry about inserting the primary key in our queries because, by default, when inserting documents in MongoDB collection, if you forget to add a field name with the _id, then MongoDB automatically handles the situation and adds an ObjectId field as shown below:

In the above code, we have not mentioned the _id field, but when we run that code the _id appears by default in the output of the code.

For modifying the queries, MongoDB provides query modifiers that are limit() and sort() clauses. These provide more flexibility when executing queries. We will have a look at these query modifiers.

MongoDB limit is used to limit the number of documents that are returned in the result set for a query. Below is an example that shows how this can be done.

The above code takes the find function that returns all the documents created by MongoDB create database in the MongoDB collection. But, the limit clause in the code limits the number of documents being returned to just 2. 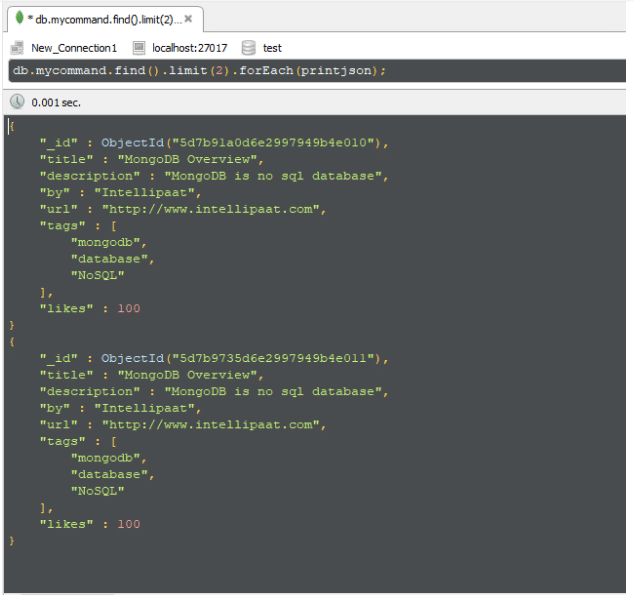 The MongoDB sort command is used to specify the order of documents to be returned based on an ascending or descending order of any key in MongoDB collection. Below is an example which shows how this can be done.

Let’s see the live code below: 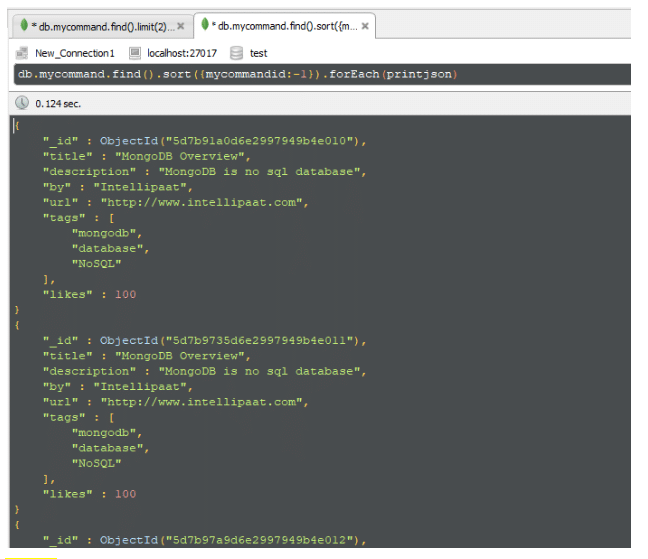 Still, have queries? Come to Intellipaat’s MongoDB Community, clarify all your doubts, and excel in your career!

We use MongoDB find method to query data from MongoDB collection.

The basic syntax of the find() method is as follows:

As we have mentioned earlier, the MongoDB find method will display all the documents in a non-structured way.

Another method we use with our MongoDB find method is the pretty() Method. The pretty() method is used to display the results in a formatted way.

Syntax for the Find with Pretty Command

The syntax of the find() command with the pretty() command is as given below: 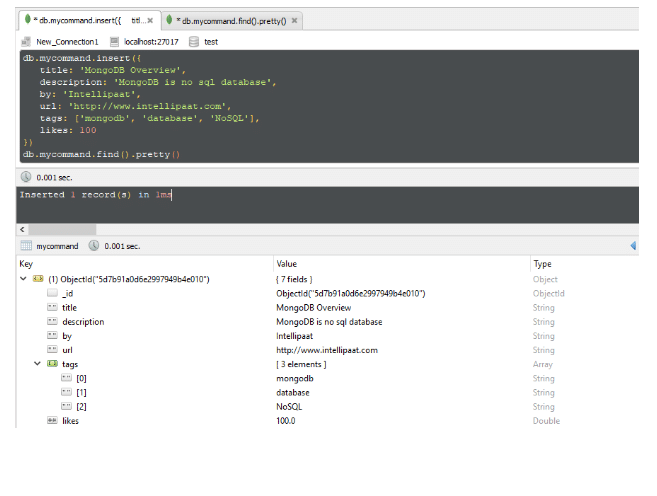 Apart from the find() method, there is yet another method, which is the findOne() method that returns only one document.

To have a detailed comparison between Firebase and MongoDB, check out Firebase Vs MongoDB!

The basic syntax of the update() method is as follows:

First, we will create a database with some details. Next, we will change the name, and then we will use the update command to see whether our database has been updated or not.

After creating our first database, we got the following output.

Now, we will update it with the update method.

Here is our updated data as given below. We can see that all the values have been changed.

Intellipaat provides the best Database Courses for its learners.

MongoDB provides the count() function that is used to know the count of documents in a collection as per the query fired.

We can see that the output comes as ‘4’, i.e., the number of documents in the MongoDB collection is 4.

If we just issue the remove command, then all documents will be removed from the collection.

The syntax for the remove method is as follows:

The following example demonstrates how to remove documents from a collection named as ‘university’:

The below example shows how we can remove a specific document from the collection ‘university’:

First, we will create a database named as ‘student’ with some details. 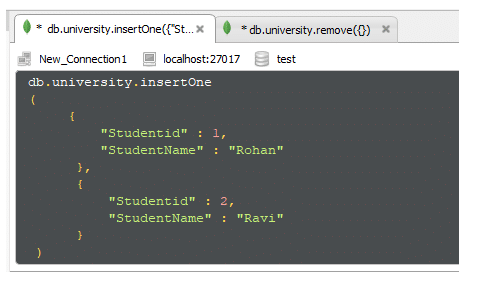 The database is created successfully. Now, we will run db.student.remove({})and see whether it removes the database or not.

Learn more about NoSQL from this insightful NoSQL blog!

When we search for a document in a collection using the db.collection.find () function, as a result, a pointer to the collection of documents gets returned, which is called a cursor.

By default, the cursor will be iterated automatically when the result of the query is returned. However, we can also explicitly go through the items returned in the cursor one by one.

If we have three documents in our collection, the cursor object will point to the first document and then iterate through all of the documents of the collection.

MongoDB cursor has many important methods; one of them is mentioned below (To see all other methods, you can visit the official website of MongoDB). 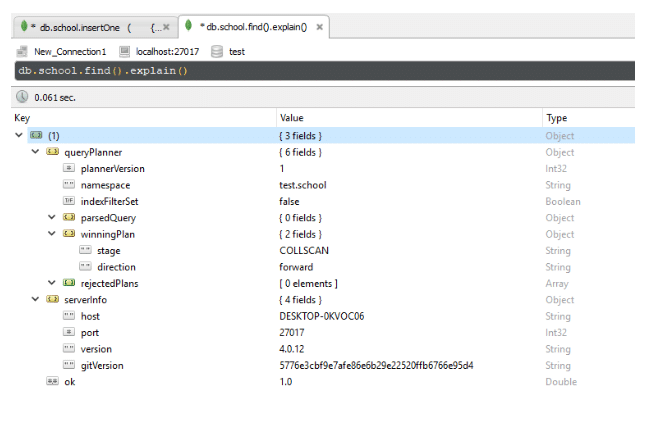 We have learned a lot in this tutorial starting with the important features of MongoDB and further learning various MongoDB commands with their live examples. I hope this tutorial has helped you knowing MongoDB better and choosing the right path for a lucrative career.

Know more about the management tools in MongoDB in this MongoDB Tutorial!.