Home / Blog / What Does a DevOps Engineer Do?

What Does a DevOps Engineer Do?

DevOps assimilates development and operations teams to improve the collaboration process. A DevOps Engineer will work with IT developers to facilitate better coordination among operations, development, and testing functions by automating and streamlining the integration and deployment processes.

DevOps aims at coupling a tighter alignment between IT operations and businesses. This new phenomenon is taking over the corporate boardrooms by storm and bringing in new methodologies and principles to streamline the creation and deployment of software in the new ‘software is eating the world’ era.

The following topics are briefly discussed in this article:

Watch this video on DevOps Tools that you need to learn now:

In this blog post, we will delve into the aspects of what it takes to become a DevOps Engineer, what available career opportunities are and what the scope is for a DevOps Engineer. There is a general belief that DevOps is more about the automation of processes, the deployment of code, and releases of software. But, it is much more than that. In order to be a successful DevOps certified professional, we need to have both technical and non-technical skills in equal measure.

Who is a DevOps Engineer?

A DevOps Engineer has to manage the IT infrastructure as per the requirement of the supported software code that is dedicated in a hybrid multi-tenant environment. There is a need to have some resources for provisioning and getting the appropriate deployment model and also for validating and monitoring the performance.

When it comes to DevOps, there is a need to have frequent and incremental changes in the code versions so that frequent testing and deployment are possible. It might not be always possible for DevOps Engineers to do the coding from scratch; they anyway need to know about it.

There is a need for DevOps Engineers to connect various elements of coding along with libraries and software development kits and integrate various components of SQL data management or messaging tools for running software release with the operating system and the production infrastructure.

Prepare yourself for the DevOps Engineer Interview Questions And Answers! 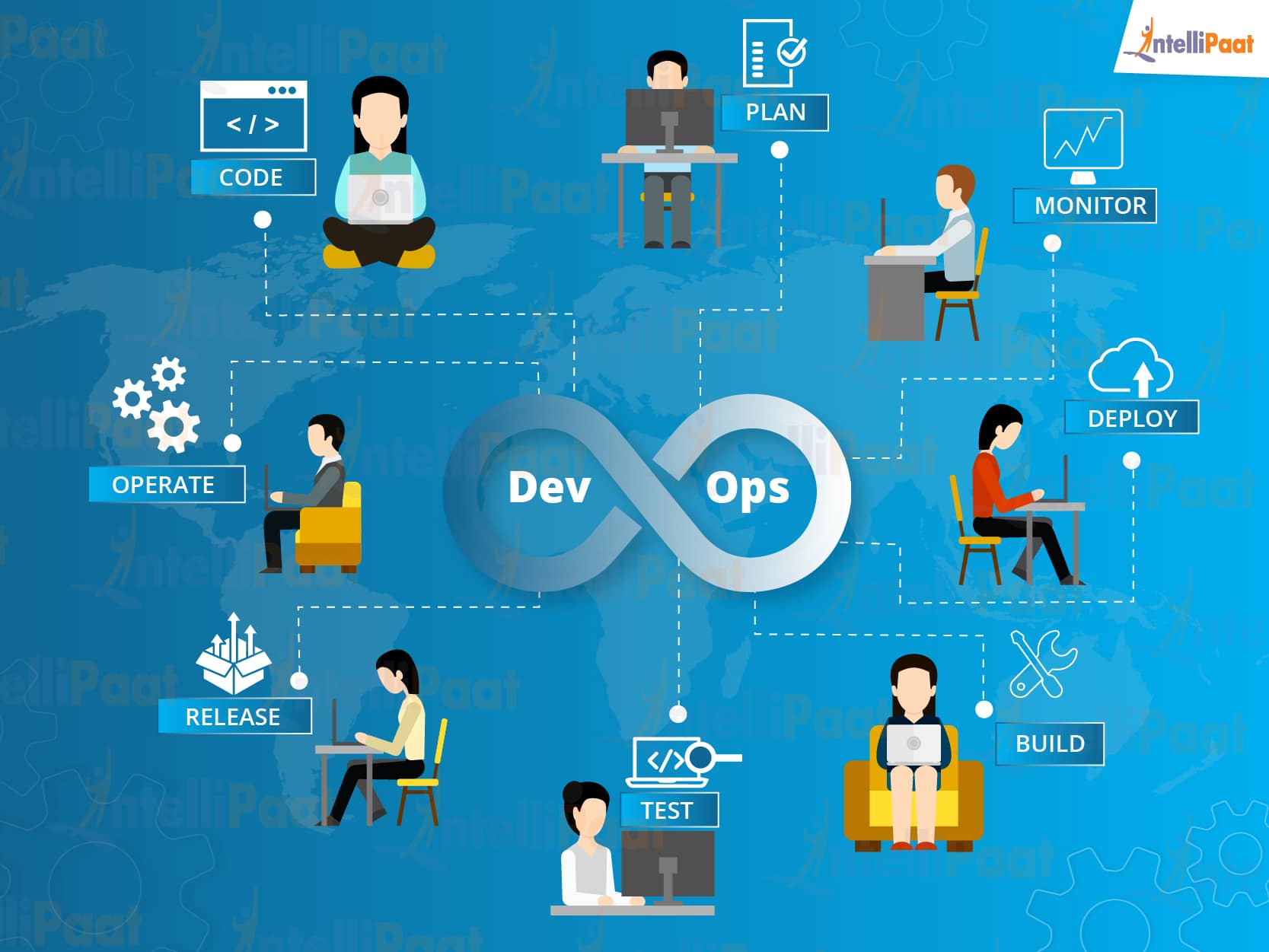 Understanding the Role of a DevOps Engineer

As said earlier, the DevOps approach to software development requires frequent, incremental changes, and DevOps Engineers rarely code from scratch. However, they must understand the basics of software development languages and be familiar with the development tools used to create a new code or update the existing one.

A DevOps Engineer will work with development staff to tackle the coding and scripting needed to connect elements of the code, such as libraries or software development kits (SDKs) and integrate other components such as SQL data management or messaging tools that are needed to run the software release with operating systems and production infrastructure.

Become Master of DevOps by going through this online DevOps training in London.

A DevOps Engineer must be able to manage the IT infrastructure as per the supported software code dedicated in multi-tenant or hybrid cloud environments. There is a need to have a provision for required resources and for getting the appropriate deployment model, validating the release and monitoring performance.

DevOps Engineers could be either the developers who have moved into operations or the system administrators who have moved into the coding domain. Either way, it is a cross-function job role that is seeing huge upside in the way software is developed and deployed in mission-critical applications.

Go through the Best DevOps Course in New York to get clear understanding of DevOps.

Tasks of a DevOps Engineer 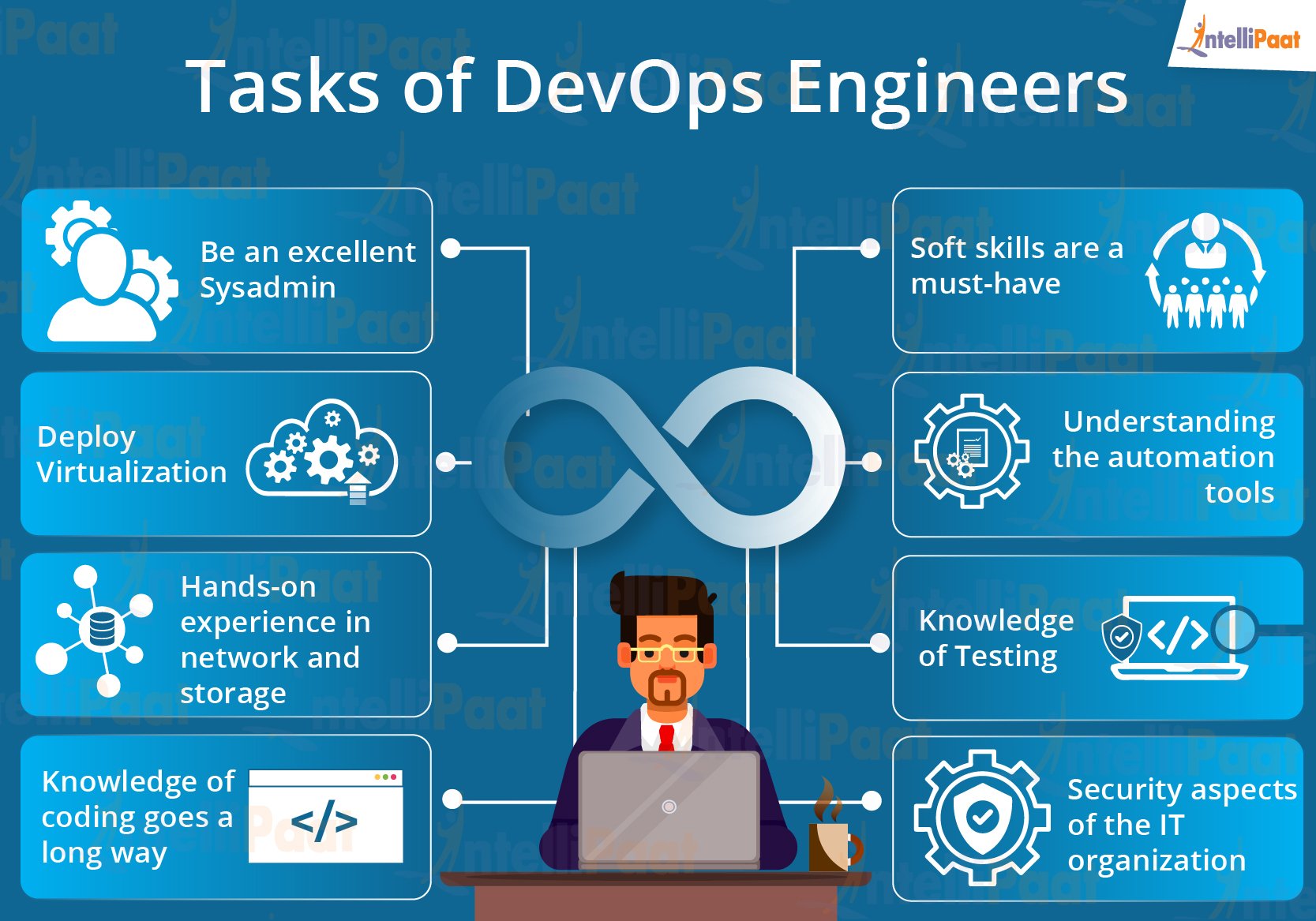 Watch these DevOps Engineer Skills You Must Master:

Software today is not created and managed in a conventional way. Nowadays, it is all about open-source technologies and using the already existing pieces of code in order to stitch a computer program that can adhere to our specific needs. Thus, the role of a DevOps Engineer needs to evolve and adapt to the new shift in the paradigm that is sweeping the world of software development life cycle and beyond.

The software has to meet the stringent requirements of a world where omni-channel digital interface is a must-have, and the code has to be adaptable and able to morph as per the changing needs of business enterprises. Due to this, the process of testing and deployment is also seeing a sea change in the way it is managed. A DevOps Engineer has to face the challenges of this new world order and be able to deliver in a fast-paced manner.

They have to ensure that the code has the changes which are frequent and incremental in nature. Thus, he/she must know about various elements of coding, along with the libraries and software development kit, so as to integrate different components of SQL data management or the messaging tools for software release.

A System Administrator is supposed to build, manage, and troubleshoot servers on a regular basis. Getting the servers to work right is one of the most important aspects of the job of a DevOps professional. Next comes automating the key processes in the deployment of the server and the infrastructure.

A DevOps professional should be well-versed with the aspect of virtualization since he/she has to take charge of the entire process of virtualizing servers and other components. He/she should be able to work in a private or a public cloud set-up with ease and deploy the necessary infrastructure and virtualization.

Today, network and storage are part and parcel of any IT organization, and hence the DevOps professional should be able to deploy the acquired knowledge of the IT network and storage concepts. This comes in handy when there is a need to design solutions that can stand up to the test of scalability, performance, and high availability at all times.

Do you know, coding is one of the few skills that will survive the onslaught of automation that we are seeing all around? So, having a basic knowledge of coding in any of the popular coding language can go a long way. It could be having a grasp of Python, Perl, Java, Ruby, or any other language. This way, the DevOps professional can be a better bridge between the development and operations teams. Everybody knows that today everything is automatized including the server triggering, application installation, configuration, and validation processes. So, there has to be a lot of coding that needs to be just right, and it is the responsibility of the DevOps professional to ensure that everything is working smoothly.

This is also a primary requirement for the DevOps professional in order to be a bridge between the development and operations teams. Since DevOps is more of a cultural shift, there is a need to have right people skills and soft skills in order to get the whole organization move in a well-oiled fashion. Since for a long time the development and operations teams were at an arm’s-length, the DevOps principles is bringing about a sea change.

There are a lot of automation tools and technologies that are being deployed in the DevOps process, and as a DevOps professional we need to be familiar with these sets of tools and be able to deploy them in the DevOps set-up.

Some of the important tools that are being widely deployed include Puppet, Chef, Jenkins, Salt, Ansible, Kubernetes, Docker, Nagios, Cloud Computing and storage platform, and Infrastructure as a Code.

Security is one of the prime focus of a DevOps professional. Due to this, a DevOps personnel needs to know about various security measures that are to be taken care of to ensure that the system is safe and sound and running at all times.

There are a lot of automation processes deployed in the IT organizations which the DevOps personnel need to take special care of. DevOps ensures that the security aspect is taken care of and the process of automation, increased visibility, fast updates, and the agile methodology are running in a smooth way.

Testing is one of the most important aspects of the software development and delivery process. So, the DevOps professional needs to understand how testing works in order to make the whole process go in the right direction.

There are a lot of automation tools that are deployed for the process of testing, and the DevOps professional needs to have hands-on experience of working with these tools. DevOps is more about preventing errors rather than finding them.

Now, you know the most important skill set of a DevOps Engineer. But, do you know, DevOps Engineers are among the highest paid professionals in the technology domain?

There is an acute need of professionals with the right set of DevOps skills in the DevOps domain. Today, DevOps has morphed into a very demanding domain with forward-thinking organizations deploying the code up to 30 times more often than their competitors. More than half of these deployments are successfully accomplished across the globe.

Learn more about DevOps in this DevOps training in Sydney to get ahead in your career!

DevOps is one of the trending topics in the IT industry and it is a high-paying job. salaries depend on the company, country, and experience.

Average Salary based on country and location

DevOps engineer has multiple roles and responsibilities in an organization since a person joining a DevOps is expected to be skilled in the following areas of work:

Some Tools Used by a DevOps Engineer

If you have any doubts or Queries related to DevOps, get it clarifies from DevOps Experts on DevOps Community.

Landing a job as a DevOps engineer is not so difficult if you have the skill required. DevOps is a growing career and is in huge demand in India and abroad. According to LinkedIn, there are more than 3,100 DevOps Engineer jobs vacancies in India as of May 2021.

Get certified from Intellipaat’s DevOps Engineer course to get hired. Below are some of the DevOps certification paths that you can sign up:

This DevOps Arc You will work on real-world projects to get hands-on experience in this domain, which will help you become a certified DevOps Architect.

This Kubernetes training helps you learn the Kubernetes architecture, its components, dashboard, app deployment on a cluster, Pods, and best security practices, and more through hands-on projects and exercises.

This Git and GitHub training course will help you learn software version control and its hosting service. As part of the training, you will master various aspects of Git architecture, working with remote repositories, Git operations, branching and merging, using Git in Eclipse IDE, and more through hands-on projects.

The role of a DevOps Engineer is not just taking care of one task or taking up one responsibility. He has to juggle between multiple roles in order to do justice to the position that is assigned to him. There is a need to have various skill sets like coding, integration, and testing. Responsibilities of the DevOps Engineer also include solving the organizational problems and improving the business process. We hope that you liked this blog on DevOps Engineer career path. Do let us know in the comments section below!

Get in touch with Intellipaat for a comprehensive DevOps Training and be a certified professional!

What is AWS CloudFront?

GitLab vs GitHub: Key Differences Between GitHub a...

What is Azure Kubernetes Service (AKS)?

What is Amazon Cognito?

What is Azure Cosmos DB?

What is Azure Monitor?

What is Azure Data Factory?

What is Microsoft Azure Data Lake?