Artificial Intelligence (AI) has made a huge impact across several industries, such as healthcare, finance, telecommunication, business, education, etc., within a short period. Today, almost every company is looking for AI professionals to implement Artificial Intelligence in their systems and provide better customer experience, along with other features. In this Artificial Intelligence Interview Questions blog, we have compiled a list of some of the most frequently asked questions by interviewers during AI-based job interviews:

Check out this informative video on Artificial Intelligence Tutorial:

2. What is Artificial Intelligence?

Artificial Intelligence is a field of computer science wherein the cognitive functions of the human brain are studied and tried to be replicated on a machine/system. Artificial Intelligence is today widely used for various applications like computer vision, speech recognition, decision-making, perception, reasoning, cognitive capabilities, and so on.

Tower of Hanoi is a mathematical puzzle that shows how recursion might be utilized as a device in building up an algorithm to take care of a specific problem. Using a decision tree and a breadth-first search (BFS) algorithm in AI, we can solve the Tower of Hanoi.

The Turing test is a method to test a machine’s ability to match the human-level intelligence. A machine is used to challenge human intelligence, and when it passes the test it is considered intelligent. Yet a machine could be viewed as intelligent without sufficiently knowing how to mimic a human.

An expert system is an Artificial Intelligence program that has expert-level knowledge about a specific area and how to utilize its information to react appropriately. These systems have the expertise to substitute a human expert. Their characteristics include:

9. What is an A* algorithm search method?

A* is a computer algorithm that is extensively used for the purpose of finding the path or traversing a graph in order to find the most optimal route between various points called the nodes.

10. What is a breadth-first search algorithm?

A breadth-first search (BFS) algorithm, used for searching tree or graph data structures, starts from the root node, then proceeds through neighboring nodes, and further moves toward the next level of nodes.

Till the arrangement is found, it produces one tree at any given moment. As this pursuit can be executed utilizing the FIFO (first-in, first-out) data structure, this strategy gives the shortest path to the solution.

11. What is a depth-first search algorithm?

Depth-first search (DFS) is based on LIFO (last-in, first-out). A recursion is implemented with LIFO stack data structure. Thus, the nodes are in a different order than in BFS. The path is stored in each iteration from root to leaf nodes in a linear fashion with space requirement.

12. What is a bidirectional search algorithm?

13. What is an iterative deepening depth-first search algorithm?

The repetitive search processes of level 1 and level 2 happen in this search. The search processes continue until the solution is found. Nodes are generated until a single goal node is created. Stack of nodes is saved.

14. What is a uniform cost search algorithm?

The uniform cost search performs sorting in increasing the cost of the path to a node. It expands the least cost node. It is identical to BFS if each iteration has the same cost. It investigates ways in the expanding order of cost.

15. How are game theory and AI related?

AI system uses game theory for enhancement; it requires more than one participant which narrows the field quite a bit. The two fundamental roles are as follows:

Alpha–Beta pruning is a search algorithm that tries to reduce the number of nodes that are searched by the minimax algorithm in the search tree. It can be applied to ‘n’ depths and can prune the entire subtrees and leaves.

Fuzzy logic is a subset of AI; it is a way of encoding human learning for artificial processing. It is a form of many-valued logic. It is represented as IF-THEN rules.

19. What is a partial-order planning?

A problem has to be solved in a sequential approach to attain the goal. The partial-order plan specifies all actions that need to be undertaken but specifies an order of the actions only when required.

First-order predicate logic is a collection of formal systems, where each statement is divided into a subject and a predicate. The predicate refers to only one subject, and it can either modify or define the properties of the subject.

21. What is the difference between inductive, deductive, and abductive Machine Learning?

Deep Learning is a subset of Machine Learning which is used to create an artificial multi-layer neural network. It has self-learning capabilities based on previous instances, and it provides high accuracy.

Get certified from the top Artificial Intelligence Course in Singapore now!

25. Differentiate between parametric and non-parametric models.

Naive Bayes Machine Learning algorithm is a powerful algorithm for predictive modeling. It is a set of algorithms with a common principle based on Bayes Theorem. The fundamental Naive Bayes assumption is that each feature makes an independent and equal contribution to the outcome.

28. What is perceptron in Machine Learning?

Perceptron is an algorithm that is able to simulate the ability of the human brain to understand and discard; it is used for the supervised classification of the input into one of the several possible non-binary outputs.

30. Is KNN different from K-means Clustering?

31. What is ensemble learning?

Ensemble learning is a computational technique in which classifiers or experts are strategically formed and combined. It is used to improve classification, prediction, function approximation, etc. of a model.

Are you interested in learning AI? Enroll in the Artificial Intelligence Course in Bangalore and learn from experts!

A hash table is a data structure that is used to produce an associative array which is mostly used for database indexing.

34. What is regularization in Machine Learning?

Regularization comes into the picture when a model is either overfit or underfit. It is basically used to minimize the error in a dataset. A new piece of information is fit into the dataset to avoid fitting issues.

35. What are the components of relational evaluation techniques?

These are described in detail on our AI Community!

36. What is model accuracy and model performance?

F1 score is the weighted average of precision and recall. It considers both false positive and false negative values into account. It is used to measure a model’s performance.

39. Can you name three feature selection techniques in Machine Learning?

40. What is a recommendation system?

A recommendation system is an information filtering system that is used to predict user preference based on choice patterns followed by the user while browsing/using the system.

41. What methods are used for reducing dimensionality?

43. What are the advantages of neural networks?

Bias error is used to measure how much on an average the predicted values vary from the actual values. In case a high-bias error occurs, we have an under-performing model.

Variance is used to measure how the predictions made on the same observation differ from each other. A high-variance model will overfit the dataset and perform badly on any observation.

TensorFlow is an open-source Machine Learning library. It is a fast, flexible, and low-level toolkit for doing complex algorithms and offers users customizability to build experimental learning architectures and to work on them to produce desired outputs.

46. How to install TensorFlow?

47. What are the TensorFlow objects?

50. What are the hyper parameters of ANN?

51. What is vanishing gradient?

As we add more and more hidden layers, backpropagation becomes less useful in passing information to the lower layers. In effect, as information is passed back, the gradients begin to vanish and become small relative to the weights of the network.

Dropout is a simple way to prevent a neural network from overfitting. It is the dropping out of some of the units in a neural network. It is similar to the natural reproduction process, where the nature produces offsprings by combining distinct genes (dropping out others) rather than strengthening the co-adapting of them. 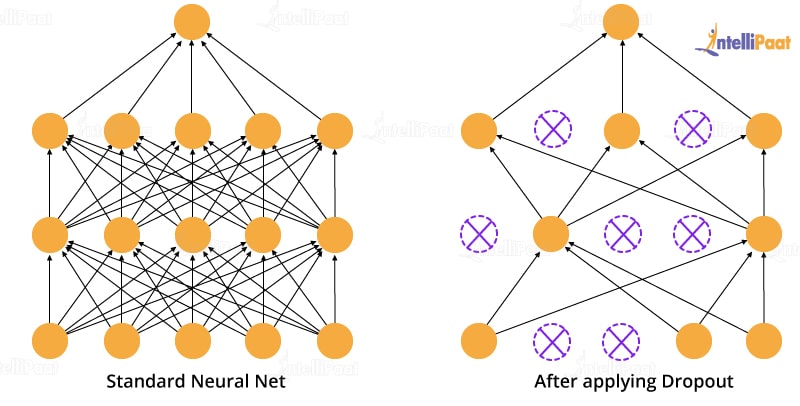 Long short-term memory (LSTM) is explicitly designed to address the long-term dependency problem, by maintaining a state of what to remember and what to forget.

56. What is an autoencoder? Name a few applications.

An autoencoder is basically used to learn a compressed form of the given data. A few applications of an autoencoder are given below:

57. What are the components of the generative adversarial network (GAN)? How do you deploy it?

58. What are the steps involved in the gradient descent algorithm?

Gradient descent is an optimization algorithm that is used to find the coefficients of parameters that are used to reduce the cost function to a minimum.

Step 2: Calculate the gradient, i.e., the variation in SSE when the weights (x,y) are changed by a very small value. This helps us move the values of x and y in the direction in which SSE is minimized

Step 3: Adjust the weights with the gradients to move toward the optimal values where SSE is minimized

Step 4: Use new weights for prediction and calculating the new SSE

Step 5: Repeat Steps 2 and 3 until further adjustments to the weights do not significantly reduce the error

59. What do you understand by session in TensorFlow?

It is a class for running TensorFlow operations. The environment is encapsulated in the session object wherein the operation objects are executed and Tensor objects are evaluated.

60. What do you mean by TensorFlow cluster?

TensorFlow cluster is a set of ‘tasks’ that participate in the distributed execution of a TensorFlow graph. Each task is associated with a TensorFlow server, which contains a ‘master’ that can be used to create sessions and a ‘worker’ that executes operations in the graph. A cluster can also be divided into one or more ‘jobs’, where each job contains one or more tasks.

61. How to run TensorFlow on Hadoop?

To use HDFS with TensorFlow, we need to change the file path for reading and writing data to an HDFS path. For example:

62. What are intermediate tensors? Do sessions have lifetime?

The intermediate tensors are tensors that are neither inputs nor outputs of the Session.run() call, but are in the path leading from the inputs to the outputs; they will be freed at or before the end of the call.

Sessions can own resources, few classes like tf.Variable, tf.QueueBase, and tf.ReaderBase, and they use a significant amount of memory. These resources (and the associated memory) are released when the session is closed, by calling tf.Session.close.

Check out this informative video on Deep Learning:

63. What is the lifetime of a variable?

When we first run the tf.Variable.initializer operation for a variable in a session, it is started. It is destroyed when we run the tf.Session.close operation.

64. Is it possible to solve logical inference in propositional logic?

Yes, logical inference can easily be solved in propositional logic by making use of three concepts:

65. How does face verification work?

There are four main things you must consider when understanding how face verification works:

66. What are some of the algorithms used for hyperparameter optimization?

There are many algorithms that are used for hyperparameter optimization, and following are the three main ones that are widely used:

Overfitting is a situation that occurs in statistical modeling or Machine Learning where the algorithm starts to over-analyze data, thereby receiving a lot of noise rather than useful information. This causes low bias but high variance, which is not a favorable outcome.

Overfitting can be prevented by using the below-mentioned methods:

68. How is overfitting avoided in neural networks?

Overfitting is avoided in neural nets by making use of a regularization technique called ‘dropout.’

By making use of the concept of dropouts, random neurons are dropped when the neural network is being trained to use the model doesn’t overfit. If the dropout value is too low, it will have a minimal effect. If it is too high, the model will have difficulty in learning.