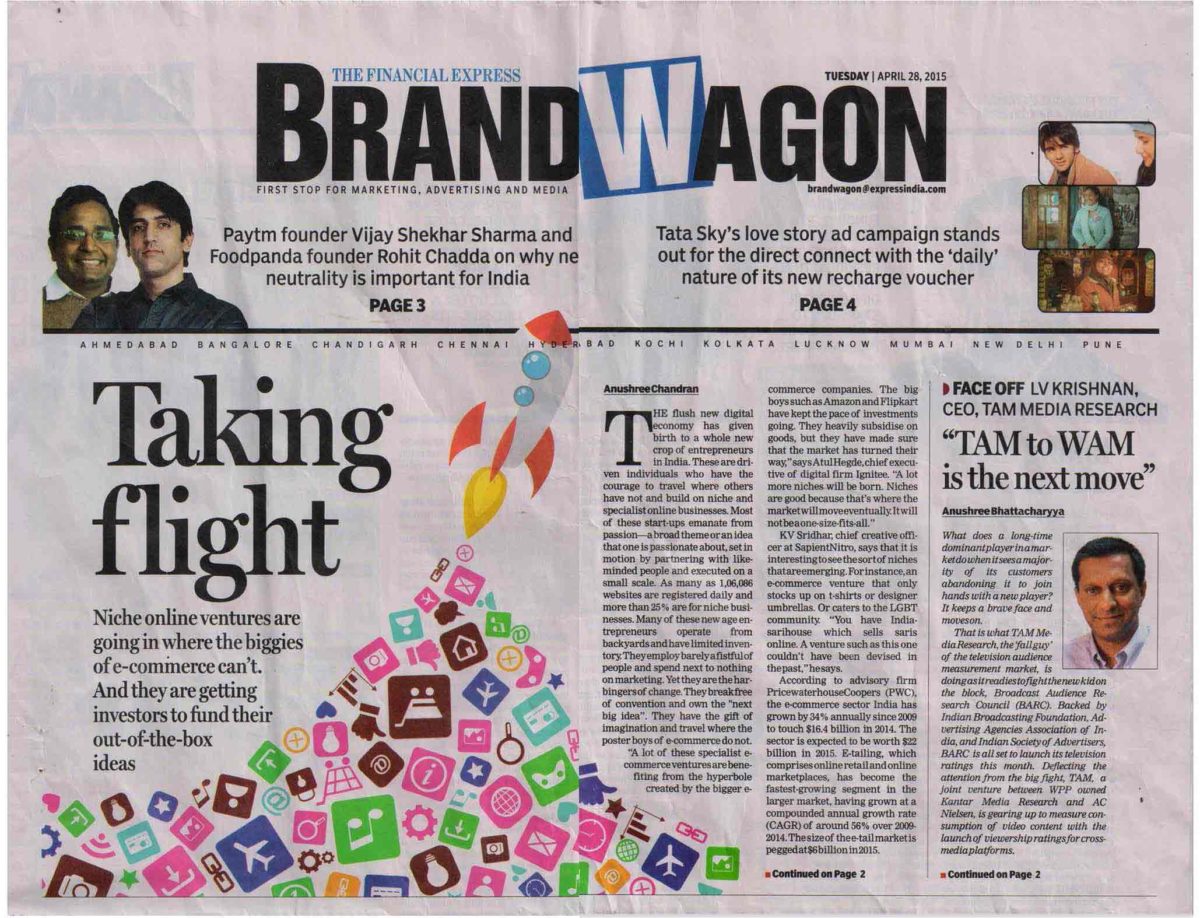 Rising on Flipkart, Amazon and others, niche online ventures are getting investors to fund their out-of-the-box ideas.

Today, India has around 210 million wireless internet subscribers and only 20 million wired subscribers. While globally desktop access fore-commerce matured before mobile access, India leapfrogged the desktop evolution and is leveraging its large mobile base to drive e-commerce. (Rohnit Phore) 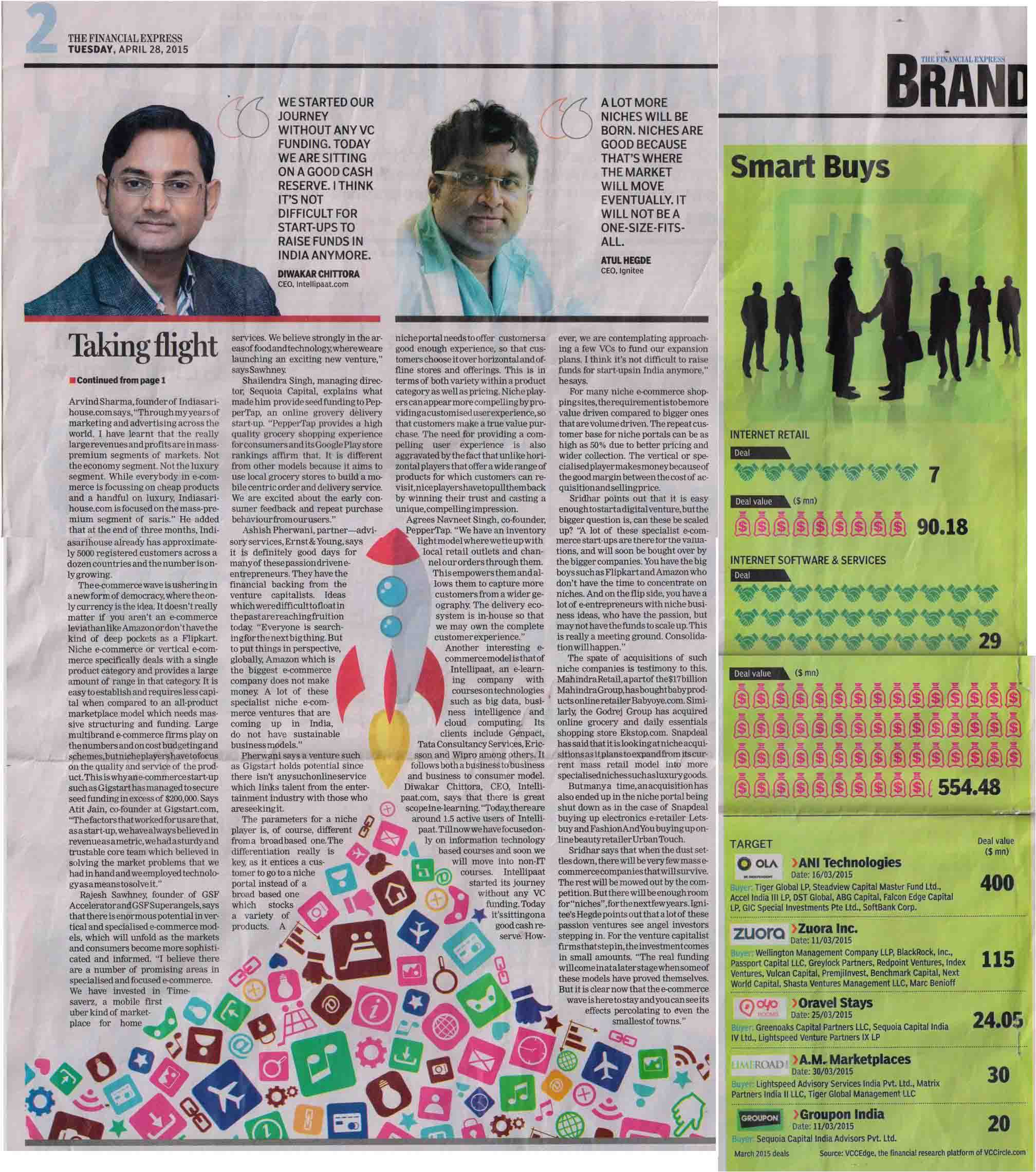 “A lot of these specialist e-commerce ventures are benefiting from the hyperbole created by the bigger e-commerce companies. The big boys such as Amazon and Flipkart have kept the pace of investments going,” CEO Ignitee.

THE flush new digital economy has given birth to a whole new crop of entrepreneurs in India. These are driven individuals who have the courage to travel where others have not and build on niche and specialist online businesses. Most of these start-ups emanate from passion—a broad theme or an idea that one is passionate about, set in motion by partnering with like-minded people and executed on a small scale. As many as 1,06,086 websites are registered daily and more than 25% are for niche businesses. Many of these new age entrepreneurs operate from backyards and have limited inventory. They employ barely a fistful of people and spend next to nothing on marketing. Yet they are the harbingers of change. They break free of convention and own the “next big idea”. They have the gift of imagination and travel where the poster boys of e-commerce do not. Check graph

“A lot of these specialist e-commerce ventures are benefiting from the hyperbole created by the bigger e-commerce companies. The big boys such as Amazon and Flipkart have kept the pace of investments going. They heavily subsidise on goods, but they have made sure that the market has turned their way,” says Atul Hegde, chief executive of digital firm Ignitee. “A lot more niches will be born. Niches are good because that’s where the market will move eventually. It will not be a one-size-fits-all.”

KV Sridhar, chief creative officer at SapientNitro, says that it is interesting to see the sort of niches that are emerging. For instance, an e-commerce venture that only stocks up on t-shirts or designer umbrellas. Or caters to the LGBT community. “You have Indiasarihouse which sells saris online. A venture such as this one couldn’t have been devised in the past,” he says.

According to advisory firm PricewaterhouseCoopers (PWC), the e-commerce sector India has grown by 34% annually since 2009 to touch $16.4 billion in 2014. The sector is expected to be worth $22 billion in 2015. E-tailing, which comprises online retail and online marketplaces, has become the fastest-growing segment in the larger market, having grown at a compounded annual growth rate (CAGR) of around 56% over 2009-2014. The size of the e-tail market is pegged at $6 billion in 2015.

Arvind Sharma, founder of Indiasarihouse.com says, “Through my years of marketing and advertising across the world, I have learnt that the really large revenues and profits are in mass-premium segments of markets. Not the economy segment. Not the luxury segment. While everybody in e-commerce is focussing on cheap products and a handful on luxury, Indiasarihouse.com is focused on the mass-premium segment of saris.” He added that at the end of three months, Indiasarihouse already has approximately 5000 registered customers across a dozen countries and the number is only growing.

The e-commerce wave is ushering in a new form of democracy, where the only currency is the idea. It doesn’t really matter if you aren’t an e-commerce leviathan like Amazon or don’t have the kind of deep pockets as a Flipkart. Niche e-commerce or vertical e-commerce specifically deals with a single product category and provides a large amount of range in that category. It is easy to establish and requires less capital when compared to an all-product marketplace model which needs massive structuring and funding. Large multibrand e-commerce firms play on the numbers and on cost budgeting and schemes, but niche players have to focus on the quality and service of the product. This is why an e-commerce start-up such as Gigstart has managed to secure seed funding in excess of $200,000. Says Atit Jain, co-founder at Gigstart.com, “The factors that worked for us are that, as a start-up, we have always believed in revenue as a metric, we had a sturdy and trustable core team which believed in solving the market problems that we had in hand and we employed technology as a means to solve it.”

Rajesh Sawhney, founder of GSF Accelerator and GSF Superangels, says that there is enormous potential in vertical and specialised e-commerce models, which will unfold as the markets and consumers become more sophisticated and informed. “I believe there are a number of promising areas in specialised and focused e-commerce. We have invested in Timesaverz, a mobile first uber kind of marketplace for home services. We believe strongly in the areas of food and technology, where we are launching an exciting new venture,” says Sawhney.

Shailendra Singh, managing director, Sequoia Capital, explains what made him  provide seed funding to PepperTap, an online grovery delivery start-up. “PepperTap provides a high quality grocery shopping experience for consumers and its Google Play store rankings affirm that. It is different from other models because it aims to use local grocery stores to build a mobile centric order and delivery service. We are excited about the early consumer feedback and repeat purchase behaviour from our users.”

Ashish Pherwani, partner—advisory services, Ernst & Young, says it is definitely good days for many of these passion driven e-entrepreneurs. They have the financial backing from the venture capitalists. Ideas which were difficult to float in the past are reaching fruition today. “Everyone is searching for the next big thing. But to put things in perspective, globally, Amazon which is the biggest e-commerce company does not make money. A lot of these specialist niche e-commerce ventures that are coming up in India, do not have sustainable business models.”

Pherwani says a venture such as Gigstart holds potential since there isn’t any such online service which links talent from the entertainment industry with those who are seeking it.

The parameters for a niche player is, of course, different from a broad based one. The differentiation really is key, as it entices a customer to go to a niche portal instead of a broad based one which stocks a variety of products. A niche portal needs to offer customers a good enough experience, so that customers choose it over horizontal and offline stores and offerings. This is in terms of both variety within a product category as well as pricing. Niche players can appear more compelling by providing a customised user experience, so that customers make a true value purchase. The need for providing a compelling user experience is also aggravated by the fact that unlike horizontal players that offer a wide range of products for which customers can re-visit, nice players have to pull them back by winning their trust and casting a unique, compelling impression.

Agrees Navneet Singh, co-founder, PepperTap. “We have an inventory light model where we tie up with local retail outlets and channel our orders through them. This empowers them and allows them to capture more customers from a wider geography. The delivery eco-system is in-house so that we may own the complete customer experience.”

Another interesting e-commerce model is that of Intellipaat, an e-learning company with courses on technologies such as big data, business intelligence and cloud computing. Its clients include Genpact, Tata Consultancy Services, Ericsson and Wipro among others. It follows both a business to business and business to consumer model.

Diwakar Chittora, CEO, Intellipaat.com, says that there is great scope in e-learning. “Today, there are around 1.5 active users of Intellipaat. Till now we have focused only on information technology based courses and soon we will move into non-IT courses. Intellipaat started its journey without any VC funding. Today it’s sitting on a good cash reserve. However, we are contemplating approaching a few VCs to fund our expansion plans. I think it’s not difficult to raise funds for start-upsin India anymore,” he says.

For many niche e-commerce shopping sites, the requirement is to be more value driven compared to bigger ones that are volume driven. The repeat customer base for niche portals can be as high as 50% due to better pricing and wider collection. The vertical or specialised player makes money because of the good margin between the cost of acquisition and selling price.

Sridhar points out that it is easy enough to start a digital venture, but the bigger question is, can these be scaled up? “A lot of these specialist e-commerce start-ups are there for the valuations, and will soon be bought over by the bigger companies. You have the big boys such as Flipkart and Amazon who don’t have the time to concentrate on niches. And on the flip side, you have a lot of e-entrepreneurs with niche business ideas, who have the passion, but may not have the funds to scale up. This is really a meeting ground. Consolidation will happen.”

The spate of acquisitions of such niche companies is testimony to this. Mahindra Retail, a part of the $17 billion Mahindra Group, has bought baby products online retailer Babyoye.com. Similarly, the Godrej Group has acquired online grocery and daily essentials shopping store Ekstop.com. Snapdeal has said that it is looking at niche acquisitions as it plans to expand from its current mass retail model into more specialised niches such as luxury goods.

But many a  time, an acquisition has also ended up in the niche portal being shut down as in the case of Snapdeal buying up electronics e-retailer Letsbuy and FashionAndYou buying up online beauty retailer Urban Touch.

Sridhar says that when the dust settles down, there will be very few mass e-commerce companies that will survive. The rest will be mowed out by the competition. But there will be enough room for “niches”, for the next few years. Ignitee’s Hegde points out that a lot of these passion ventures see angel investors stepping in. For the venture capitalist firms that step in, the investment comes in small amounts. “The real funding will come in at a later stage when some of these models have proved themselves. But it is clear now that the e-commerce wave is here to stay and you can see its effects percolating to even the smallest of towns.”