The topics that we will cover in this module are:

One of the most crucial part of learning any programming language is to understand how data is stored and manipulated in that language. Users are often inclined toward Python because of its ease of use and the number of versatile features it provides. One of those features is dynamic typing.

Go through this Python Course in London to get a clear understanding of Python!

The equivalent code for the above operation in Python would look like the following code block:

As we can observe from the above example, in C, all variables are explicitly declared with their respective data types; while in Python, a variable is directly taken and then just assigned a value to it rather than declaring the data type of that variable. In Python, the data types of variables are dynamically inferred. We can assign any value to the variable, and the Python interpreter will identify the data type. We can also re-assign a different type of value to an already assigned variable, unlike in C or Java where if we have declared a variable to be an integer and then assign a string value to it then we will get an error.

The equivalent code for the above operation in C would look like:

This type of flexibility that comes as a result of being a dynamically typed language is one of the reasons that Python is considered to be easy and convenient to learn and use.

Learn more about Python from this Python Training in New York to get ahead in your career!

Python data types are categorized into two as follows:

Following diagram lists the data types that fall under the categories of the mutable and immutable data types in python: 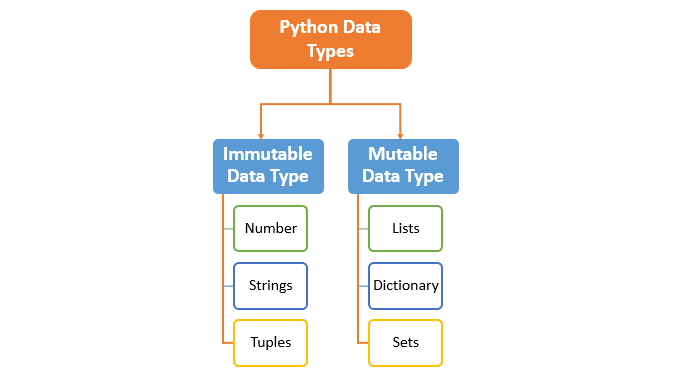 The categories of built-in data types in Python are:

How to check Data Type in Python

You can get the data type of any object by using the type() function:

This brings us to the end of this module in Python Tutorial. The above-mentioned Python data types will be further discussed in detail in their respective separate modules. Let’s meet there!

Meanwhile, take a look at Intellipaat’s Python Certification Course, along with our Python Interview Questions.