What is Pandas in Python?

So, let’s now tell you What is Pandas in Python. Pandas is a Python library that is a simple yet powerful tool for Data Science. Python Pandas is one of the most widely used Python packages. This package comprises many data structures and tools for effective data manipulation and analysis. Python Pandas is used everywhere including commercial and academic sectors and in fields like economics, finance, analytics, statistics, etc. If we are going to work with data using Python, we need to learn Python Pandas as well.

Some of the key features of Python Pandas are as follows:

While analyzing the product reviews, we will learn how to implement key Pandas in Python concepts like indexing, plotting, etc.

The data is in the csv (comma-separated values) format—each record is separated by a comma ‘,’—and rows are separated by a new line. There are approximately 1,841 rows, including a header row, and 10 columns in the file.

Before we start, a quick note on the software environments: Here in this tutorial, we are using Python Version 3.5, and examples included in this tutorial will be done using Jupyter Notebook.

Let’s have a look at the topics covered in this module:

How to Import Pandas in Python?

The very first and the most important operation is to import the Python Pandas library properly.

While importing Pandas library, we abbreviate it as pd.

A series object can contain any type of data, including mixed types. Now, let’s have a look at how we can create series objects in Python Pandas with some examples.

Just to make sure that the object we have created just now is indeed a series object, we can use type() on the object.

Example 2:
Further, we can specify the index of the series object as shown below:

Now, we will create a DataFrame using a list of lists.

Creating a DataFrame from a dictionary:

We can also create DataFrames with the help of Python dictionaries.

Importing Data with Pandas in Python

Here, we will first read the data. The data is stored in a csv format, i.e., comma-separated values, where each record is separated by a comma ‘,’ and each row by a new line. Here are the first few rows of the Amazon_Products_Review.csv file: 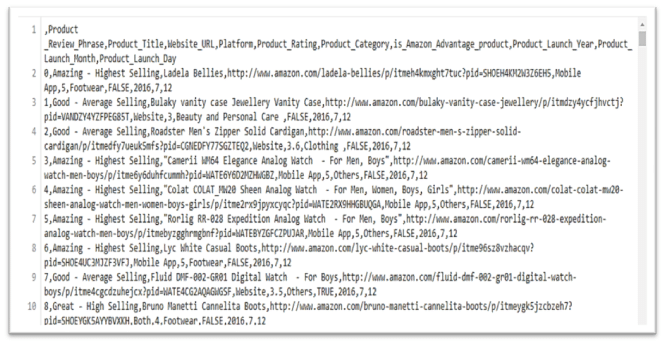 As we can see, each row in the data represents a single product that was reviewed by Amazon. Here, we also have a leading column that contains row index values. Currently, we will not discuss this column; later on, we’ll dive into what index values are. To work with data in Python, the first step is to import the file into a Pandas DataFrame. A DataFrame is nothing but a way to represent and work with tabular data, and tabular data has rows and columns.
Our file is of .csv format. So, pd.read_csv() function is going to help us read the data stored in that file. This function will take the input as a csv file and return the output as a DataFrame.

Let’s inspect the type of Product_Review using the type() function.

For file types other than .csv, the importing conventions are mentioned below:

Now that our DataFrame is ready, let’s have a look at some of the operations in Pandas.

Now, as the data is read properly, we will work on indexing Product_Review so that we can get the rows and columns as per our requirements.

Indexing DataFrames with Pandas in Python

Now, let’s say, we want to select and have a look at a chunk of data from our DataFrame. There are two ways of achieving the same: First, selecting by position and, second, by the label.

Example 1:
Suppose, we want only the first column out of the DataFrame. Then, we would use iloc on the DataFrame as shown below:

This snippet of code shows that we want to have a look at all rows of the first column. Keep in mind that the position of the first column (or the first row) always starts with 0. As we needed all the rows, we specified just a colon (:) without mentioning any position.

Also, in the example shown above, instead of writing 0:5 we can leave off the first position value, like :5. This has the same meaning. But if we write 0: this means indexing of 0th position to the last position.
Similar examples:

Now, let’s update our DataFrame by removing the first column, which contains no useful information:

Now, since we are aware of the NumPy indexing methodologies, we can notice that they are quite similar to Pandas indexing by position. But unlike NumPy, each of the columns and rows in Pandas has a label. Yes, selecting by position is easy. But for large DataFrames, keeping track of columns and their corresponding positions becomes complicated. That’s when our next method of indexing comes in handy.

The second method is selecting by the label of columns. The .loc method allows us to index using labels instead of positions. Let’s illustrate this method with some examples.

(Selecting some rows of one column)
Displaying the first five rows of the Product_Title using the .loc method:

Example 2:
(selecting some rows of more than one column)

Displaying the first five rows of the columns, Product_Title and Product_Rating

Sorting DataFrames with Pandas in Python

Apart from indexing, another very simple yet useful feature offered by Pandas in Python is the sorting of DataFrames. To get a clear idea of the sorting feature, let’s look at the following examples.

Sorting the DataFrame based on the values of a column:

Say, we want to sort the Product_Rating column by its values.

Now, if we want to sort the Product_Rating column by its values in descending order.

There are some special methods available in Pandas in Python which makes our calculation easier. Let’s apply those methods in our Product_Review DataFrame.
1) Mean of all columns in our DataFrame

2) Median of each column in our DataFrame

3) Standard deviation of each column in our DataFrame

4) Maximum value of each column in our DataFrame

5) Minimum of each column in our DataFrame

6) Number of non-null values in each DataFrame column 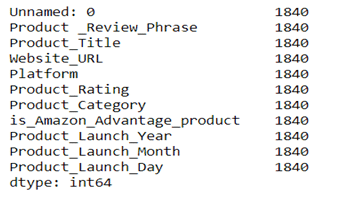 We can also perform mathematical operations on series objects or DataFrame objects.

For example, for dividing every value in the Product_Rating column by 2, we use the following code:

Note: All common mathematical operators that work in Python, like +, −, *, /, and ^, will also work in a DataFrame or a series object.

Now that we have learned about how to do mathematical operations in Pandas, let’s have a look at the filtering methods available in Pandas Python and use them in our DataFrame.

Say, we want to find footwear that has a Product_Rating greater than 3.
First, let us generate a Boolean series with our filtering condition and see the first five results.

Now that we have got the Boolean series, we use it to select only rows in a DataFrame where the series contains the value True so that we get the rows in Product_Review where Product_Rating is greater than 3.

Let’s make it a bit complicated by adding more than one condition. Since we wanted to have a look at the footwear that has a Product_Rating greater than 3, we will now add our second condition in the Product_Category column of the DataFrame.

In the example shown above, we saw filtering conditions with AND Boolean operator (&). Similarly, OR operator (|) can also be applied when necessary.
Till now, we have learned how to do data manipulation using the Pandas library. Pandas library also offers a data visualization feature for a better understanding of the data. Let us see how data visualization with Pandas works.

Python is one of the most demanding skills right now in the market. Enroll in our best Python training in Bangalore and become a Python Expert.

Data visualization with Pandas in Python is carried out in the following ways: 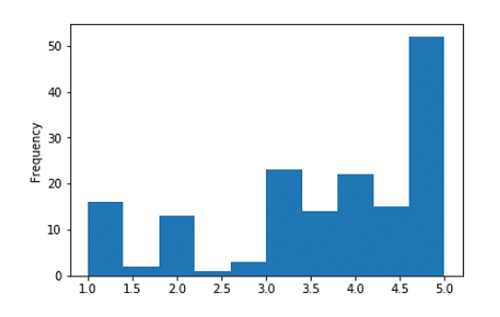 In the histogram shown above, we have seen the frequency of the footwear based on Product_Rating.

Now, we will have a look at the scatter plot of the Product_Rating based on the Product_Launch_Year.
Note: Here, both x and y columns need to be numeric. 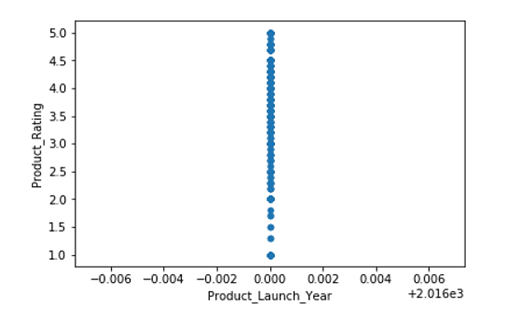 Analysis: From the scatter plot shown above, we can analyze how Product_Rating of products launched in the year 2016 changes. It appears that low Product_Rating is less in number as the density near the low Product_Rating is less.
This brings us to the end of the Python Pandas Library Tutorial. In this tutorial, we have learned how different features in the Pandas library work and how to use them for a better understanding of our data. Here is the complete Python Tutorial for you to refer

Refer to our Cheat Sheet in Pandas

Learned much on Python? Check out how to get Python certification and a free guide for the recurring Python interview questions prepared by our experts.