In this SciPy tutorial, we will be learning about Python SciPy in detail, including the installation and setup with Python SciPy and various modules like integration, optimization, interpolation, etc. All concepts will be explained with understandable and simple codes that can be used to calculate the datasets provided.

What is SciPy in Python: Learn with an Example

Let’s start off with this SciPy Tutorial with an example. Scientists and researchers are likely to gather an enormous amount of information and data, which are scientific and technical, from their exploration, experimentation, and analysis. Dealing with such a huge amount of data becomes a hindrance to them. That is, calculating and computing large data manually is not an easy task. Hence, they make use of supercomputers and Data Science for the purpose of faster computing and accurate outcomes.

Another simpler way to deal with scientific and technical computing of data is by making use of one of the Python libraries which is solely built for this purpose. It is referred to as Python SciPy (pronounced as ‘sigh pi’).

Python SciPy is open-source software; therefore, it can be used free of cost and many new Data Science features are incorporated in it.

Following is the list of all topics covered in this SciPy Tutorial:

Pip is basically a recursive acronym that stands for ‘Pip Installs Packages’. It is a standard package manager which can be installed in most operating systems.

Note: In order to install other packages by using the pip command, we need to make sure that we have Python installed pip in our system.

This command is mainly used for installing SciPy in Windows operating system with the help of pip. We install packages to local users rather than system directories by making use of the ‘–user’ flag.
This command denotes installing SciPy in Mac. Sudo is a command that allows one user to run programs with the security privileges of another user.
This command is used to install SciPy in a Linux operating system. The apt-get command is one of the command line tools which is necessary to work with APT (Advanced Packaging Tools) software packages.

Many dedicated software tools are necessary for Python scientific computing, and SciPy is one such tool or library offering many Python modules that we can work with in order to perform complex operations.

The following table shows some of the modules or sub-packages that can be used for computing:

Enroll yourself in Online Python Training in Sydney and give a head-start to your career in Python Programming!

Numerical integration is carried out in scipy by making use of scipy.integrate sub-package. This package provides several integration techniques. Some of the integration functions are listed below.

It can also be called general-purpose integration. When there is only one variable present between two points, then we make use of the function quad.

The function used above is quad with the two limits ranging between a and b. Let us understand the function with an example.
A researcher is gathering data, and he wants to find out the integrals of the data.

In the above example, 12x is the function which lies between the intervals 0 and 1.
Example for single integration:

Lambda function is deployed here so that any number of arguments can be used but it can have only one expression. Like here the expression is 12x, and the researcher makes use of the integrated function scipy.integrate.quad(f, 0, 1).

It is a type of integration where a function consists of at least two variables with y being the first argument and x being the second.

Go through this Python Course in London to get a clear understanding of Python!

It is a type of integration where a function consists of at least three variables.
There will be three functions for x, y, and z. Hence, the researcher computes with three integrals.

The researcher further analyzes to involve with three integrals, so he thinks of combining the two integral values with the third one represented with the z function.

The above example denotes three integrals with a new function dz between the intervals 0 and 3.

Images can be read from a file as an array by making use of scipy.misc.imread. We will be able to use this Python Function only if we have installed Python imaging library (PIL).

In the above output, we have used an image called mario.png, and this image has been read from its saved file and later converted into an array so that it can be later used for image processing.

Learn more about Python from this Python Training in New York to get ahead in your career!

Optimization is the method of selecting the most effective or best resource or situation for a given problem. The Python syntax of optimization can be given as:

The minimize function can be used to provide a common interface to constrained and unconstrained algorithms for a multivariate scalar function in scipy.optimize sub-package.

It is applied for nonlinear optimization problems for which derivatives will be unknown, and it is a direct search method. We make use of the minimize() routine along with a Nelder–Mead simplex example.

The method used in this algorithm is (method = ‘Nelder-Mead’)

We use the optimize function at times to solve the least-squares problem with bounds on the variables.
The following example illustrates the use of a rosenbrock function to implement the least square problem.

This is one of the minimization methods that comes under optimization. In the following example, we import a root function from the scipy.optimize sub-library in order to use it in further calculation within the code.

This is part of optimization where we make use of non-linear least squares to fit a function.
The following code illustrates the curve fit: 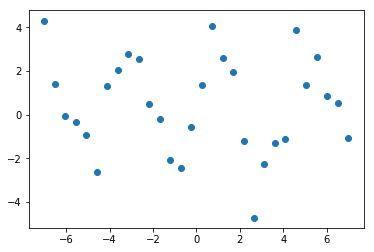 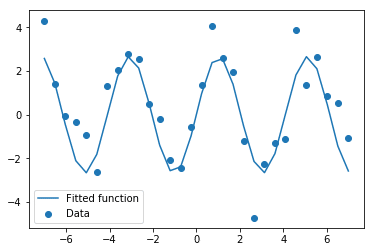 Finding a value between two points in a curve or a line can be termed as interpolation. 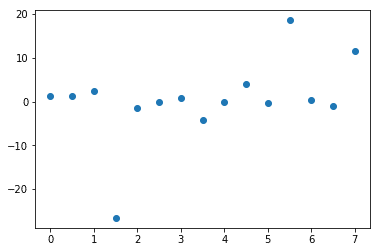 This sub-package contains a large number of probability distributions, as well as a growing library of statistical functions.

There are various sub-modules in statistics. They are listed below:

This is a type of generic continuous random variable class that is mainly meant for sub-classing.

The continuous random variable is represented as rv_continuous with various parameters within the function.

A simple demonstration of rv_continuous sub-module:

This is a type of generic random variable class that is mainly meant for sub-classing.

The discrete random variable is represented as rv_discrete with various parameters within the function. 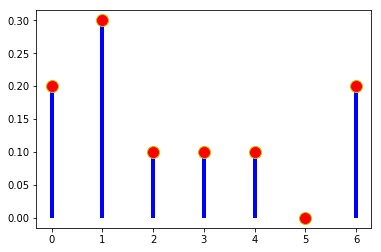 In the above-generated graph, seven values are plotted at various points specified along the y-axis.

This is a type generates a distribution given by a histogram.

The random variable histogram is represented as rv_histogram with various parameters within the function.

The following example demonstrates the representation of an rv_historgams: 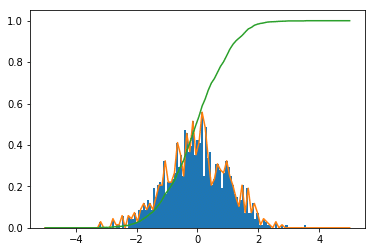 A gradual increase in and then a stable flow of the wave is represented in the above graph which demonstrates the random variable histogram for the probability density function (PDF) and the cumulative distribution function (CDF).

Become a master of Python by going through this online Python Course in Toronto!

Arithmetic operations such as addition, subtraction, division, matrix power, and multiplication can make use of sparse matrices. We can implement sparse matrix for following matrix formats:

This enables efficient row slicing. Let us see a simple program where we generate an empty 3×3 CSR matrix using scipy.sparse.

Representation of a 3×3 CSR matrix upon specifying the rows and columns through inputs:

This enables efficient column slicing. Let us see a simple program where we generate an empty 3×3 CSC matrix using scipy.sparse.

Representation of a 3×3 CSC matrix upon specifying the rows and columns through inputs:

The Compressed Sparse Column matrix is more efficient at accessing column operations or column vectors as it is stored as arrays of columns and their values are stored at each row.

The Compressed Sparse Row matrix is vice versa. It is stored as arrays of rows and their values are stored at each column and are more efficient at accessing row operations or row vectors.

CSR and CSC are difficult to construct from scratch, while COO and DOK are easier to construct.

This enables efficient row slicing. Let us see a simple program where we generate an empty 3×3 COO matrix using scipy.sparse.

Representation of a 3×3 COO matrix upon specifying the rows and columns through inputs:

We can construct sparse matrix incrementally in an efficient manner using this module under the scipy.sparse sub-package.

The dictionary of keys format allows access for individual values within the matrix.

Get certified by this top Python Course in Singapore today!

Fourier front transform is performed on a given array of values, and the above output is generated.

We can compute 1-dimensional Fourier transforms by making use of the following standard syntax:

Let us discuss on this sub-package with a simple example of the sum of two cosines for a 1-dimensional discrete Fourier transform. 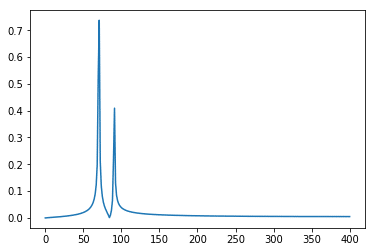 By making use of two cosine functions, the sum is calculated and plotted in the graph. The waves are plotted at 70 and 90 degrees along the x-axis.

We can compute 2-dimensional Fourier transforms by making use of the following syntax:

Let us consider a simple example of time-domain signals by making use of 2-dimensional inverse fft:

Below graphs are obtained from the time domain signal code generated by illustrating the inverse Fourier front transform. 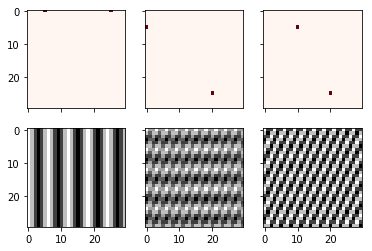 Here, we come to the end of this module in Python Tutorial. I hope that this Tutorial has provided sufficient information about the scientific and technical library of Python, that is, SciPy. There are various computing calculations that are time-consuming and stressful for the human brain. Hence, making use of such a scientific calculation library in Python programming language to carry out this purpose with ease and incredible speed has proved that this library function plays a vital role in Data Science. Now, if you want to know why Python is the most preferred language for data science, you can go through this blog on Python Data Science tutorial.

If interested to learn more, apart from this SciPy Tutorial do check out our Python Certification which is specially designed to get an in-depth understanding of all Python concepts. You can also refer to the trending Python interview questions prepared by the industry experts.