Home / Tutorial / For Loop in Python

For Loop in Python

While other languages contain conditions and increment expression in the syntax of for loop, in Python, the iteration and incrementing value are controlled by generating a sequence. In this module, we will learn about For loops in Python.

Become a Professional Python Programmer with this complete Python Training in Singapore!

Following is the list of all topics that we will cover in this module.

How to Use For Loop in Python 3

Syntax of for loop in Python 3

Let us see the Python Syntax of For Loop with examples:

The following flowchart explains the working of for loops in Python: 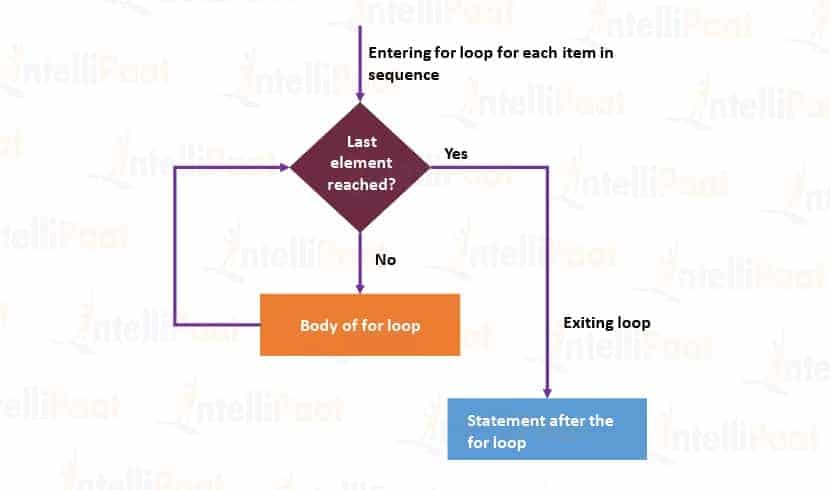 As depicted by the flowchart, the loop will continue to execute until the last item in the sequence is reached. The body of the for loop, like the body of the Python while loop, is indented from the rest of the code in the program.

Let us take a look at the Python for loop example for better understanding.

In the above example, we are calculating the squares of all elements present in the list of numbers that we have created, named ‘numbers_list’, using Python for loop. The variable i iterates from the beginning to the end of the Python List, and when the program enters the body of the loop, the square of each element is calculated using the variable i and stored in a variable named ‘square’.

Now that we understood how to write for loop in Python let us go ahead and take a step further and learn what range function in for loop.

The range() Function In Python For Loop

We can specify a particular range using an inbuilt Python function, named range(), to iterate the loop a specified number of times through that range.

Specifying start and stop points in the range() function:

Note: Here, in this example, the starting point is 3 and the ending point is 7. So, the list will be generated from 3 to 6 (4 numbers).

Using Python for loops with the range() function:

We can simply use Python For loop with the range() function as shown in the example below.

Loop Interruptions in Python For Loop

Just as with while loops, the continue statement can also be used in Python for loops to terminate the ongoing iteration and transfer the control to the beginning of the loop to continue the next iteration.

Note that the fifth iteration was interrupted as we have used the continue statement when the value of i is 5. Therefore, the control was passed to the beginning of the loop, and the program started executing the sixth iteration and did not print the value of i when it was 5.

Else in Python For Loop

Nested For Loop in Python

Difference between for and while loop in Python

Reverse for loop in Python

We can reverse for loop in python in two ways. The first method is to use the reversed() function.

With this, we come to the end of this module in Python Tutorial. Now, if you want to know how you can use python for data science, you can go through this blog on Python Data Science tutorial.

For Loop in Python